The Iranian president’s press conference on the first anniversary of the implementation of the nuclear deal is met with positive reactions among Reformists and harsh criticism by hard-liners. 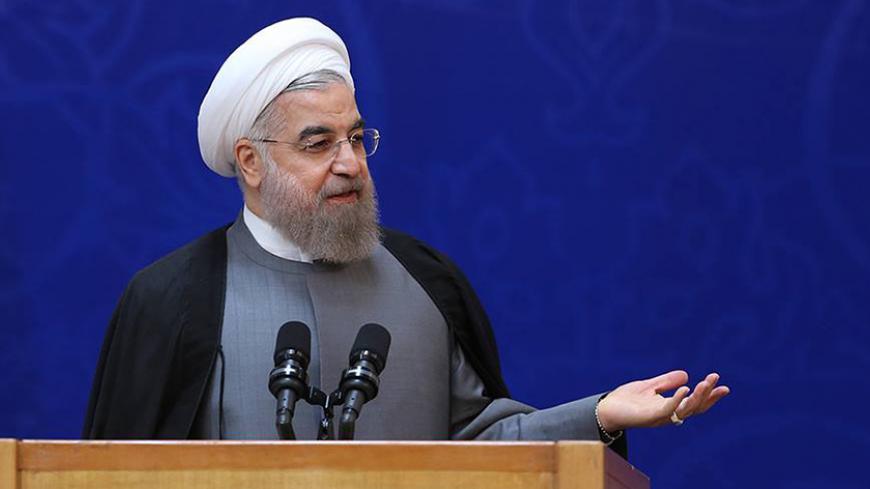 On Jan. 17, Iran’s moderate President Hassan Rouhani held a press conference on the one-year anniversary of the implementation of the Joint Comprehensive Plan of Action (JCPOA).

Rouhani addressed a range of issues, including the implementation of the nuclear deal, the country’s economic situation and the termination of sanctions. He also responded to questions about rumors that the Guardian Council intends to disqualify his expected bid for re-election in May, the house arrests of the Green Movement leaders and US President-elect Donald Trump’s disparaging remarks about the JCPOA.

In its Jan. 18 edition, the ultra-conservative Javan newspaper focused on Rouhani’s reaction to a question about Trump: “Things went out of Rouhani’s hands and caused him to recite the Quranic verse ‘But perhaps you hate a thing and it is good for you’ [2:216] for Trump, who has said that ‘he doesn’t like the JCPOA’ instead of bringing up legal reasons [for his opposition]. He [Rouhani] then said this historic sentence: ‘The JCPOA is good for America, but he [Trump] doesn’t get it.’”

Under the headline “Wear [your] glasses,” the hard-line Vatan-e-Emrooz on Jan. 18 noted the part of the press conference in which Rouhani sarcastically addressed domestic critics of the nuclear deal in saying, “Some say we can’t see the effects of the JCPOA: So wear glasses or cure yourself [of poor vision].”

The hard-line daily then slammed Rouhani for his “repetitive talk” and “the claim of the JCPOA affecting the economy and [people’s] livelihoods [positively].”

“Do not push us to fight the Guardian Council. Our relationship with the Guardian Council has always been good. … Do not pay attention to these rumors.” Rouhani said laughingly in response to a question about his possible disqualification as a candidate in the upcoming May 2017 presidential elections. This answer led the conservative Sobh-e-No daily, which is close to Tehran Mayor and potential presidential candidate Mohammad Bagher Ghalibaf, to choose the headline “Rouhani’s Doubt.” Of note, the conservative-dominated Guardian Council is tasked with vetting candidates.

“It can be understood from the president’s answers that he himself has doubts about his candidacy in the [presidential] elections. … Many of the Reformist figures have recently said that Rouhani is their final candidate, but they also have emphasized on the matter that due to their fear of unexpected events, they are willing to have one or few candidates beside Rouhani,” Sobh-e-No reported on Jan. 18.

Reformist newspaper Etemaad in its Jan. 18 edition focused on Rouhani’s response to a question about the issue of the house arrests of the leaders of the Green Movement, Mir Hossein Mousavi and Mehdi Karroubi. “We need the Islamic Republic’s consensus. … We are hopeful; we would like some issues to happen tonight and not tomorrow,” Rouhani said at the press conference.

Moreover, Sadegh Zibakalam, an outspoken Tehran University professor, wrote in Etemaad on Jan. 18, “Mr. President doesn’t formally announce his decision to run in the coming presidential election because he knows that the attacks against the government and himself will increase. He also knows that [if he announces his bid for re-election] the hard-liners’ activities to prepare the ground for disqualification [in the May 2017 vote] … will increase. What is very important for Mr. Rouhani in the 2017 elections is to attract the gray votes.” Of note, “gray votes” refer to the section of the Iranian electorate that usually does not intend to vote, but whenever it does turn out, it manages to shift election results, such as in the 2013 presidential elections that brought Rouhani to power.

Meanwhile, the Reformist Aftab-e Yazd newspaper praised Rouhani’s approach in the press conference. “Yesterday’s press conference was successful and fruitful. The reason for this can be summed up in one point: President Hassan Rouhani is the man of dialogue and not monologue. … The head of the administration can explain his achievements once the situation becomes challenging,” Aftab-e Yazd wrote Jan. 18.