With Iran's presidential election three months away, tongues are openly wagging about the Guardian Council's potentially disqualifying President Hassan Rouhani from running for re-election, and the Priniciplists suspect a ploy to portray him as a victim. 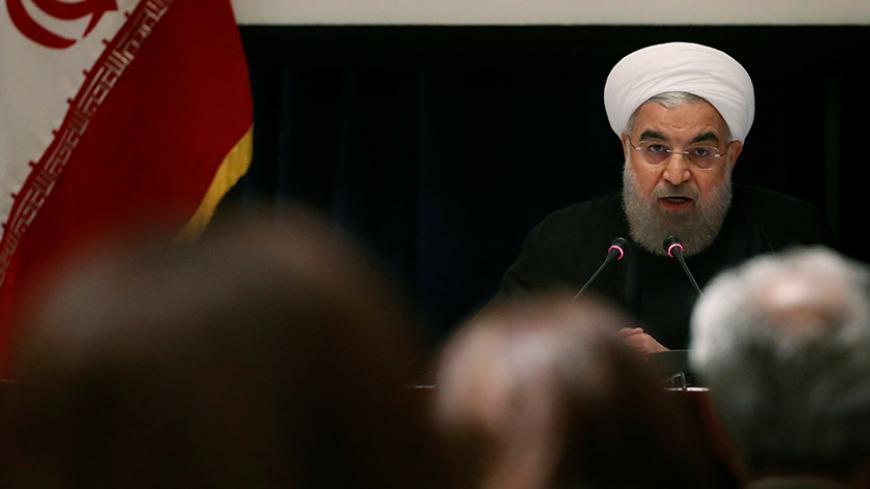 With less than three months until Iran’s May 19 presidential elections, it is still not clear which candidates will be running. The Principlists have yet to reach a consensus on a single candidate, while there are rumors that the Guardian Council may disqualify incumbent President Hassan Rouhani's candidacy for re-election.

Until recently, speculation about Rouhani’s potential disqualification circulated only in in political circles, but the possibility is now discussed openly by media outlets and officials alike. The suggestion was perhaps first articulated in public by the late ultra-conservative cleric Jafar Shojooni, a prominent member of the hard-line Combatant Clergy Association, in May 2016. In an interview with Arman Daily, Shojooni urged efforts to ensure that the Rouhani administration won’t stay in office beyond its current term.

After media reports on Rouhani’s potential disqualification gradually increased, government spokesman Mohammad Bagher Nobakht dismissed such speculation Jan. 3. Without going into detail, he said that it is "not necessary to occupy people's minds” with such speculation.

Yet the speculation was reignited the next day following remarks by Guardian Council spokesman Abbas-Ali Kadkhodaei. In an interview with Mashregh News, Kadkhodaei said, “There is no guarantee that a president will be approved for a second term." However, Guardian Council member Nejatollah Ebrahimian told local news outlet Tabnak Jan. 14 that the council had not yet reviewed any candidates for the presidential elections and that it was too early to discuss the matter. Although Kadkhodaei did not use any names and only addressed the matter from a legal standpoint, his remarks nonetheless set off a new wave of talk about Rouhani's possible disqualification.

Assuming that this speculation has a basis in reality, how might such a move be justified? Hard-line cleric Hamid Rohani, who heads the Foundation for Historical Research and the Encyclopedia of the Islamic Revolution, has compared Rouhani to Abolhassan Banisadr, Iran’s first president. Banisadr was impeached by the parliament soon after the 1979 Islamic Revolution and removed from office, and later fled the country. In a speech on Aug. 4, 2016, Rohani said, “The treason committed by Mr. Rouhani could not have been committed even by Banisadr. Caution is needed to make sure he is omitted from the spring 2017 elections.”

Rouhani’s brother and special aide, Hossein Fereydoun, has been another pressure point for the president. Principlist media outlets have published many allegations and rumors about Fereydoun’s involvement in financial corruption. On Jan. 9, lawmaker Mohammad Ali Pour-Mokhtar confirmed that there had been claims of corruption in an interview with Basij News. On Jan. 19, judiciary spokesman Gholamhossein Mohseni Ejei announced that there are links between Fereydoun and one of the suspects in a major corruption scandal involving Iranian banks. Ejei did not elaborate on these alleged links.

It appears that even the Reformists are preparing for Rouhani’s potential disqualification. A member of the Council for Coordinating the Reforms Front — which organizes Reformist candidates — told Al-Monitor on condition of anonymity, “Although the possibility of Mr. Rouhani being disqualified is very low, we are in the midst of preparing a list of individuals so that in case of an emergency, we will not be taken by surprise.” He added, “This [list] will have another advantage as well, and that is that Rouhani will not be alone in the next election. Introducing a shadow candidate next to him can help Rouhani in the debates.”

Al-Monitor spoke with Sadegh Zibakalam, a professor of political science at Tehran University, about his views on Rouhani's potential disqualification. He said, “In recent months, the Principlists have used rumors of the president's being disqualified as leverage to put pressure on Rouhani. Under the current circumstances, I don’t see this as very likely to happen. However, even if such a situation occurs, there will be no need for concern and the Reformists can introduce an alternative option.”

In a Jan. 17 press conference, Rouhani himself responded to a question about the matter, saying lightheartedly, “Do not push us to fight the Guardian Council. Our relationship with the Guardian Council has always been good. … Do not pay attention to these rumors.”

Amid the torrent of speculation, it should be noted that some Principlist media outlets treat the whole thing as a ploy initiated by Reformists to portray Rouhani as a victim. Hard-line Raja News reported Jan. 14, “There is no doubt about the inefficiency of the Rouhani administration. However, the fact that Reformist media are spending so much time on his disqualification is a surprise. Perhaps by doing this, they want to bypass the Guardian Council.”

The report went on, “What is clear is that this news is circulating more seriously in Iran’s political scene than a regular rumor, and this seriousness has prompted the Reformists to think of alternative options instead of just sitting on the sidelines. These options can [run] alongside Rouhani as shadow candidates against the Principlists’ nominees, and in case of Rouhani’s possible disqualification, offer several strong candidates for the Reformist and Moderation movement — an occurrence that, if materialized, will make it harder for one main candidate for the movement to obtain victory.”