Iranian MPs attempted to pass a bill that would reduce the Guardian Council's powers in the 2016 parliamentary elections. 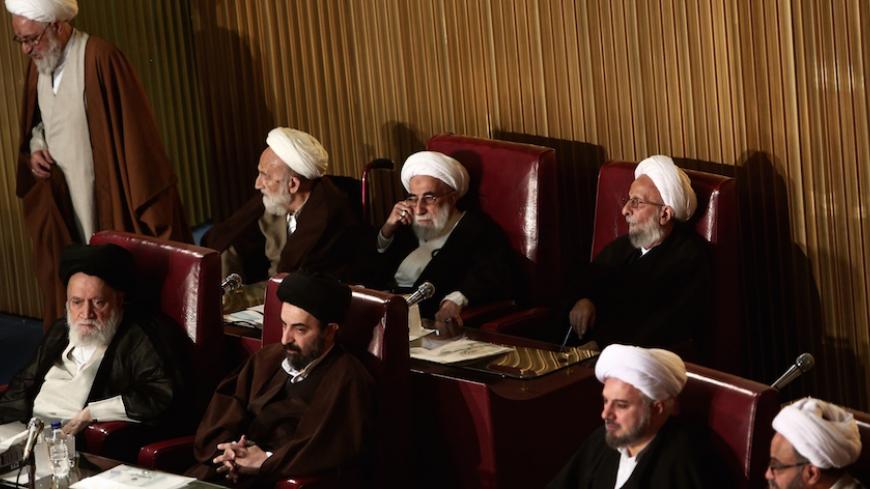 Iran's Guardian Council rejected a parliamentary bill May 1 that would have automatically qualified current members of parliament (MPs) to run in the February 2016 elections. Had the bill been accepted by the council, it would have extended the qualification of current MPs — a Principlist majority — without re-evaluation by the Ministry of Intelligence, the judiciary or the police.

In fact, had the Guardian Council, which determines whether parliamentary bills comply with the constitution and Islamic rules, approved the bill, it would have stripped itself of one of its main duties: the qualification of candidates. The parliament adopted the bill — described as controversial by Iranian media — with 125 votes in favor, 54 against and 8 neutral. Exactly one day later, the Guardian Council announced its formal disagreement. Council spokesman Nejatollah Ebrahimian told the Iranian Students News Agency that "the bill, which gave privileges to current MPs, was in contradiction with the constitution."

National parliamentary elections will be held Feb. 26, 2016. The MPs' attempts to adopt such a bill before the elections, and the Guardian Council's immediate rejection of it, could be a sign of serious disputes regarding the qualification of candidates with different political affiliations. However, some also believe that the MPs pursued the bill due to possible financial corruption probes.

Reza Alijani, former editor-in-chief of the popular opposition publication Iran-e Farda and winner of Reporters Without Borders' Press Freedom Prize, told Al-Monitor, "It was a vain and even childish attempt made by some MPs to automatically extend their qualification for the next round. The bill was presented mainly by MPs who face financial charges and consider it likely [that they will] be disqualified for the next round, because the Guardian Council cannot ignore their corruption charges."

Parliament adopted the bill on a day when only 187 out of 290 MPs were present, including the 20 Reformist MPs. The presence of at least two-thirds of MPs — 180 members — is required to vote on bills. Over the past two decades, the Reformists have typically feared facing the Guardian Council. In 2004, the council controversially disqualified 4,000 Reformist candidates from the seventh parliamentary elections, including 80 sitting members of the sixth parliament.

Principlist candidates are rarely disqualified. However, a member of Etemad Daily's editorial board told Al-Monitor, "Things have changed. Since 2012, Principlists were divided in half. One half includes proponents of Mahmoud Ahmadinejad and his Cabinet, and the other half is composed of more traditional and moderate groups of Principlists.” The journalist said that the Guardian Council has decided to come down on Ahmadinejad's allies, citing the disqualification of Ahmadinejad’s closest confidant, Esfandiar Rahim Mashaei, from the 2013 presidential election.

Adding to the speculation that the bill was related to corruption charges is how Mohammad Reza Rahimi, vice president under Ahmadinejad, reported in a February 2015 letter that he had paid 170 members of the eighth parliament. On Feb. 4, the Guardian Council spokesman said that this news would impact the qualification of candidates for the next round of elections. "If the claim is proven by related authorities, proper actions will be taken against those who were involved in the process," said the spokesman.

Current Minister of Interior Abdolreza Rahmani Fazli has said several times since Feb. 21 that dirty money earned from smuggling has entered the field of politics and elections.

The judiciary has not announced the names of those who received money from Rahimi. Likewise, Rahmani Fazli has not disclosed which candidates were supported by dirty money during their campaigns. This lack of transparency has made it difficult to conclude which groups and MPs tried to adopt this controversial bill out of fear of disqualification in the 2016 parliamentary elections.

Alijani believes that the possible disqualification of some Principlist candidates in the next elections is not part of a filtering policy aimed at any specific political group. "It should not be seen as a political action in favor of a group or against another one,” he said. “People with possible financial cases can come from different groups of MPs.”

Some Principlist MPs objected to the bill even before its rejection by the Guardian Council. Dakhil Abbas Zadeh, a member of the parliamentary Internal Affairs Commission, described the bill as discriminatory. "The bill is not rational and makes people think that MPs are trying to gain some privileges," he said.

Mehdi Mousavi Nejad, Bushehr's MP, described it as a sign of extralegal actions against justice. Javan Daily, which is associated with the Islamic Revolutionary Guard Corps (IRGC), published a critical report on the bill, saying that MPs have consistently violated the law in previous parliamentary sessions.

The decisive objection to the bill on behalf of the Guardian Council, moderate Principlist MPs and the IRGC publication Javan undoubtedly suggests the upcoming disqualification of a significant number of Principlist MPs who voted for the bill. But the identities of those individuals remain unknown. Since Reformists have yet to reveal their strategy for the 2016 parliamentary elections, and it is not clear how the Guardian Council will treat candidates close to the Green Movement and Reformists, it is still too early to analyze how the possible disqualification of Principlists will affect the political composition of the next parliament. A member of Mojahedin of the Islamic Revolution Organization, a prominent Reformist party, who wished to remain anonymous, told Al-Monitor, "I doubt that the disqualification of Principlists leads to the qualification of Reformists. This view is optimistic and naive."