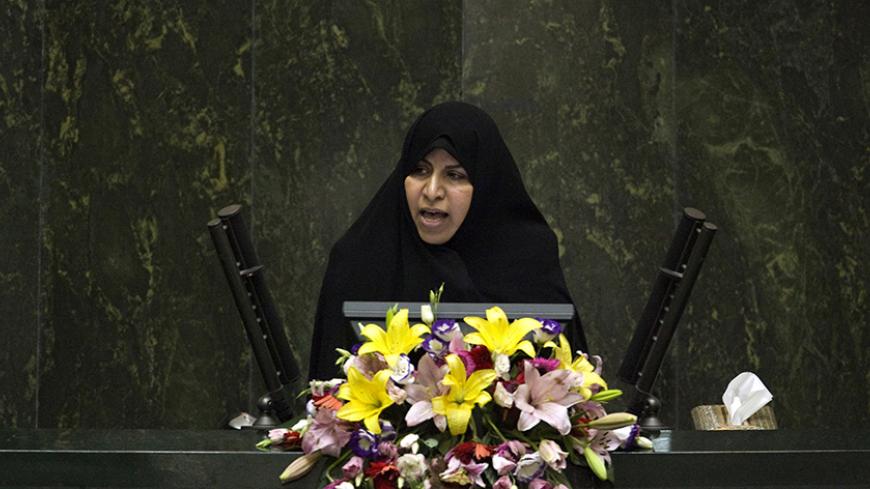 Marzieh Vahid Dastjerdi speaks to lawmakers in parliament in Tehran, when she was a nominee for health minister, Sept. 1, 2009. She was approved, and now could run for president. - REUTERS/Morteza Nikoubazl

Iran may see its first female presidential candidate in the May 19 elections. After a period of silence, Marzieh Vahid Dastjerdi, the Islamic Republic’s first and only female minister, has in recent days and weeks made headlines once again. Dastjerdi headed the Ministry of Health and Medical Education between 2009 and 2012 after being one of three women proposed as ministers by President Mahmoud Ahmadinejad during his second term (2009-13). The other two nominees were Susan Keshavarz for the post of education minister and Fatemeh Ajorlu for welfare and social security minister. Of the three, only Dastjerdi succeeded in securing a vote of confidence from Iran’s parliament and was confirmed on Sept. 3, 2009.

Although Dastjerdi is the Islamic Republic’s first female minister, she is not the first Iranian woman to hold such office. Farrokhroo Parsa and Mahnaz Afkhami served as education minister and minister of women's affairs, respectively, under former ruler Mohammad Reza Shah Pahlavi (1941-1979).

Just as with many others who worked with Ahmadinejad, Dastjerdi did not last until the end of his presidency. On Sept. 27, 2012 — following differences between the two — he dismissed Dastjerdi. It is believed that her dismissal was due to her insistence on keeping Bagher Larijani, her deputy at the Ministry of Health, in his post. Bagher Larijani is one of the powerful Larijani brothers, including Ali and Sadegh, the respective chiefs of the legislative and judiciary branches of the government. In this vein, factional conflicts between the Larijanis, who were opponents of Ahmadinejad, notably intensified in the days leading to Dastjerdi’s dismissal. Following her removal, Dastjerdi returned to the medical profession. In April 2015, Supreme Leader Ayatollah Ali Khamenei appointed her as a member of the Imam Khomeini Relief Foundation’s board of trustees.

More recently, Dastjerdi ran in the February 2016 parliamentary elections as a member of the Grand Principlist Alliance or Principlist List. When the election results were announced, she found herself among the 29 other Principlist candidates who ran in Tehran and did not stand much of a chance against the rival Reformist-moderate List of Hope. Securing 860,000 votes, Dastjerdi came in 35th. By comparison, the 30th and final parliament member elected from Tehran got over 1.7 million votes.

Yet in recent days and weeks there has been ever-increasing speculation about her potential candidacy in the upcoming presidential elections — a race for which she first needs to pass through the Guardian Council’s filter. The council, which is in charge of vetting candidates, has so far refused to approve female candidates.

Article 115 of the Islamic Republic of Iran's Constitution states the conditions for presidential candidates to include “coming from among the religious and political rijal [statesmen] and [being] Iranian, a manager and a thinker.” The key point of debate is how to interpret the term "rijal," an Arabic word that can mean both "men" and "personalities." While some have preferred to use the literal and Arabic translation of the term to mean "men," many legal experts and even members of the Guardian Council itself have rejected this interpretation and see no problem with the candidacy of female nominees. Indeed, on Dec. 31, Guardian Council spokesman Abbas Ali Kadkhodaei told reporters, “There are no obstacles for women to register as presidential candidates.” As such, Iranian law does not ban women from running for the presidency. The question is thus whether Dastjerdi will be able to set a precedent.

In a press conference in early January, Mohammad Reza Bahonar, a theoretician of the Principlist movement, said that the Guardian Council’s norm to date has been to not include women among "rijal" and that he doubted any changes will be made in this regard.

A week earlier, on Dec. 25, Dastjerdi, along with 10 figures from the Principlist movement, established the Popular Front of the Forces of the Islamic Revolution in an effort to unite conservatives and get them to agree on a single candidate to challenge incumbent President Hassan Rouhani.

However, speculation about Dastjerdi’s potential candidacy in Iran have become ever more serious. In an interview with KhabarOnline on Jan. 15, Ajorlu — a conservative who serves in parliament — said, “With the green light of the Guardian Council, the presence of a female candidate and Mrs. Dastjerdi in the next [presidential] elections can become a reality.”

Notably, the Reformists seem to have embraced Dastjerdi’s potential candidacy even more than her own Principlist camp. Parvaneh Salahshoori, a Reformist parliament member from Tehran and head of the women’s faction in parliament, welcomed the potential candidacy of Dastjerdi on Jan. 16, saying, “Her presence [in the election race] is a good idea to split Rouhani’s vote. However, she does not have the necessary charisma and cannot defeat Rouhani.” In this vein, media outlets close to the Rouhani administration have written about the reasons behind Dastjerdi’s potential candidacy and the benefits it would have. Indeed, it cannot be denied that the Reformists are interested in having Dastjerdi as Rouhani’s main rival because it's taboo-breaking, but also to improve Iran’s international image and also because she will not be a dangerous challenger.

Meanwhile, reactions among Principlists have been mixed, with some media outlets not being welcoming of Dastjerdi’s potential candidacy. The conservative Tabnak, close to Mohsen Rezaei, on Jan. 19 ran a commentary saying, "Which aims are behind the spread of rumors of Dastjerdi’s candidacy? Although there is no doubt of Dastjerdi’s suitability, it seems as if this is a pre-planned scenario being spread by the Reformists to confuse the Principlist camp.”

In a Jan. 19 press conference, Dastjerdi herself was quoted as saying that she has no plans to run in the May 19 election. However, anyone familiar with Iranian politics knows that it is common for politicians to withhold announcements of their candidacies until the final hours and days before the registration deadline. As such, only time will tell whether Iran will see its first female presidential candidate come May.