The number of women in Iran's next parliament is set to double compared to the incumbent parliament. 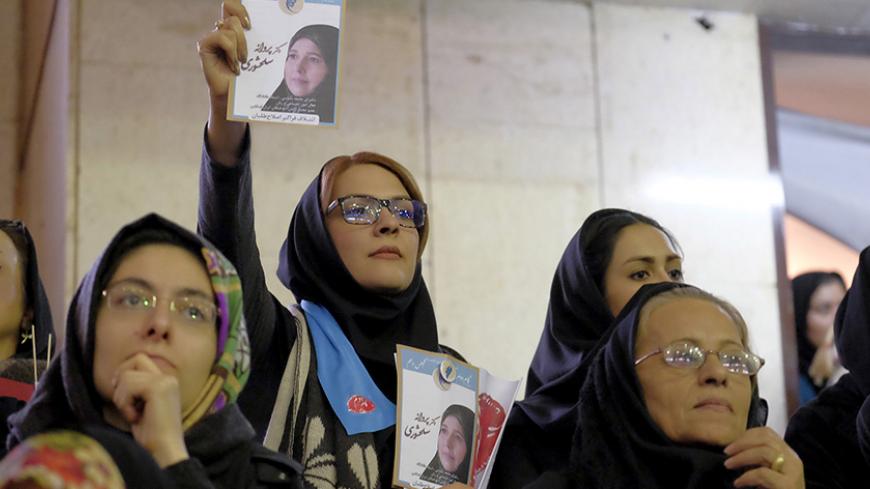 A supporter of candidate for the upcoming parliamentary elections Parvaneh Salahshouri holds her electoral leaflets during a Reformist campaign event in Tehran, Feb. 18, 2016. - REUTERS/Raheb Homavandi

The Islamic Republic’s 10th parliamentary elections have yielded a significant victory not only for Reformists, but also for women pushing for change in Iranian society. While the final nationwide results are not expected until March 1; early numbers show twice the number of female members as in the previous parliament. Though ballots from many districts are still uncounted, it is clear that the number of women will reach at least 22. Thus far, 15 women have won seats in Parliament, and 14 of them are Reformists. These include all eight women on the Reformist-moderate “List of Hope” in Tehran, where the results are set to be finalized on Feb. 29.

“This election is significant because it represents the first time women’s rights activists from across the political spectrum inside and outside Iran came together to push for more women to run and fill seats in the [parliament],” Fatemeh Haghighatjoo, a parliament member who famously stood up to hard-liners, said in an interview with Al-Monitor. Living in exile in Boston today after resigning in protest in 2004, Haghighatjoo, herself among the youngest lawmakers when she was elected in 2000. She said, “The young generation in Iran is the biggest segment of society, and it is important to have women sitting in parliament to bring their issues to the fore.”

The youngest new parliament member is a 30-year old Reformist from Tehran. Seyedeh Fatemeh Hosseini, a PhD candidate in finance at the University of Tehran, ran on a platform of advancing the voices of her generation and advocating their issues to decision-makers. Crucially, in a campaign speech to students at her alma mater, Amir Kabir University, Hosseini spoke about the securitized atmosphere on university campuses since the suppression of the 2009 Green Movement, saying, “Students want a safe university space, not a securitized one. I fully believe what President [Hassan] Rouhani says: ‘The best place to criticize power is in the university.’” Along with others on the “List of Hope,” Hosseini campaigned for economic progress and to further foreign investment following the implementation of the Joint Comprehensive Plan of Action. To address women’s rights, she plans to focus on employment opportunities for her generation, saying, “Today, 45% of young women between the ages of 20-24 are unemployed. This shows the inequality of opportunity for employment that exists for young women, and this must be changed.” World Bank data suggests that unemployment among young Iranian men is less than half that of young women.

The push to change the gender makeup of parliament began last November, when various women’s rights groups initiated campaigns to increase the number of female parliament members to 100. These social media campaigns by a plethora of women’s groups aimed to elect women who advance gender equality to 30% of Parliament’s 290 seats. As a result, a record number of women registered as candidates for parliament: 1,234 out of the total of 12,123 hopefuls. Out of the over 6,200 registered candidates who were approved by the Guardian Council, 586 were women. In the Assembly of Experts elections, which were held in parallel with the parliamentary vote, 16 women registered to run. However, all of them were disqualified by the Guardian Council.

Tayyebeh Siavoshi, one of the eight women elected from the Reformist-moderate “List of Hope” in Tehran, credited these campaigns for her candidacy. “I wasn’t even considering a run until these campaigns started,” she said prior to the vote. “When I saw women’s rights activists encouraging women to register, I decided to do my part and I registered like thousands of others. It was only after so many people were unjustly disqualified from the elections that I decided to continue the candidacy.” Siavoshi, who has worked in the Foreign Ministry and led efforts to get women involved in international organizations, has been a civil society activist for years, focusing on women and children’s rights.

Another new Reformist parliament member from Tehran, Parvaneh Salahshouri, expressed great hope for the incoming parliament in a video interview circulated on social media. She said that the elections represent a good step toward working for women’s issues in the country. “In the previous parliament, there were nine women MPs out of a total of 290 lawmakers. In this election alone, the ‘List of Hope’ from Tehran had eight [female] candidates.” Asked whether the new women parliamentarians will make a difference for women’s rights in the country, Salahshouri responded, “Of course! The conservative women in parliament think completely differently from us. They are against women. Their language and policies are all pro-men.” She went on to say that she and her new female colleagues will work to change the divorce laws in the country, as well as turn the parliament’s attention to violence against women.

Haghighatjoo finds it significant that the women who have won election come from a variety of academic backgrounds. This, she believes, will mean that these women can serve on a variety of committees in parliament – specifically the Planning and Budget Committee, which has never had a woman member. Haghighatjoo told Al-Monitor, “In order to get [legislation] related to women, youth, and children passed, we need to make sure they are included in the country’s annual budget, and this year, I believe we have a chance to get women appointed to that committee.”

Haghighatjoo had some advice for the largest cohort of Reformist women elected to parliament since the days she herself led Reformists in the Iranian legislature: “I think they should start working together now and not wait to be sworn in in May. They need to strategize how they can support each other and women’s rights in parliament. They need to build alliances with other MPs and work to see how they can ensure funding for women’s issues in next year’s budget.”