Rouhani and the Prospects For US-Iran Nuclear Talks

Iran's new president will have to balance Iran's domestic politics with its international and regional position in the course of handling nuclear negotiations with the West. 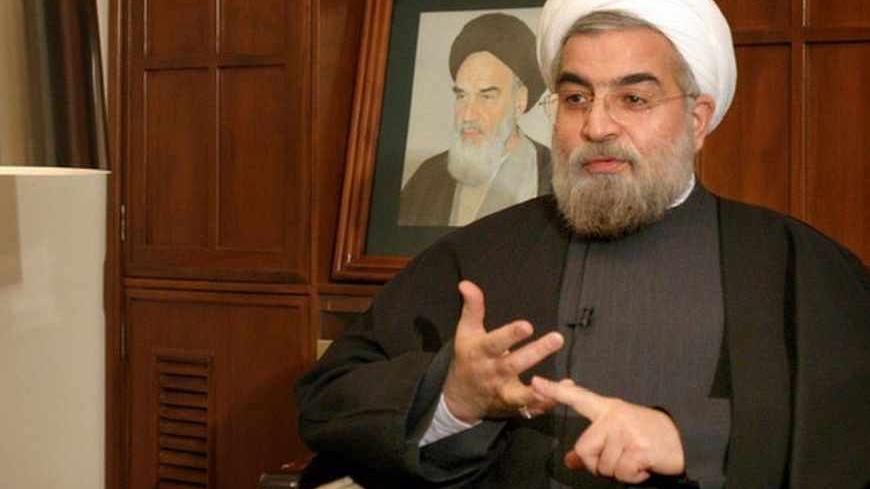 With Iranian President Hassan Rouhani in power, the issue of starting talks with the United States has once again become central in Iran’s domestic politics. Some are in favor of initiating the talks, perceiving them as necessary for removing the sanctions and thus solving Iran’s current economic problems. Others are against it, believing that initiating such talks with the United States is useless and will only endanger Iran’s security-ideological interests. While the issue of direct talks with the United States has become a political matter in Iran, the talks are only likely to occur when there is a convincing chance of success to preserve the country’s interests with a consensus among Iran's various political forces.

From the perspective of the moderate Reformists, America, a superpower, is a key player in the nuclear negotiatons of the five permanent members of the UN Security Council plus Germany (P5+1) with Iran, and the main driving force behind the creation of the current global coalition imposing coercive economic sanctions against Iran. In this context, they relate the improvement of Iran’s economic conditions to establishing talks and restoring relations with the United States.

In contrast, the conservative Principlists, beyond the economic conditions, mostly relegate the Iranian nuclear issue to a mere political-ideological matter in Iran-US relations, especially Iran’s regional policy, believing that the nuclear issue is only a pretext and the United States' main goal is to weaken Iran’s political role in the region and thus change the regime in Iran.

Striking a balance between these two trends, Rouhani's pragmatic-centrist trend frames the talks as an urgent economic-political issue, attempting to find a middle ground to initiate the talks with the United States. This trend is likely to focus on a specific, urgent mutual matter, i.e. the nuclear issue, which can simultaneously address the country’s economic, political and security problems and bring about actual benefit in the short term. With this approach, Iran can adopt some new transparency measures in order to convince the United States not to introduce new sanctions. This will put the talks in a political process, thus removing any possibility of direct conflict. Then, Rouhani can convince the political forces inside the country of the talks' benefit and take the next step to remove the existing sanctions through conciliatory measures.

At present, the issue of which party should take the first step in the course of the nuclear talks is negatively affecting the momentous opportunity for restoring relations between Iran and America. Experience shows that the difficult part in the two sides’ relations is the initial confidence-building measure of entering into the talks. Previous experience, for instance, in handling Afghanistan’s crisis shows that only in the course of negotiations and in the context of a win-win deal will the Iranian political elites make appropriate political compromises to show their good will. In other words, any confidence-building concept for Iran is equivalent to making sure of the existence of a win-win situation.

One significant advantage for Rouhani is that of knowing how to simultaneously deal with Iran’s domestic politics and regional, international relations. Since he has the experience of working with Iran’s security and military bodies and political elites, especially during the Iran-Iraq war, as well as having served as the secretary of Iran’s Supreme National Security Council, he knows Iran’s political system well and can strike a balance between the interests of various political-security forces inside the country and in the region.

At the same time, conducting Iran’s nuclear negotiations with world powers has increased his experience in preserving Iran’s interests in international politics. Therefore, he also knows how to balance Iran’s domestic politics with its regional and international relations in the course of handling the nuclear issue.

As for how Iran should initiate talks with the United States, some prefer a comprehensive grand-deal package in which all concerned mutual issues, including the nuclear issue and regional issues, are simultaneously addressed. Others argue that due to the complexity of the nuclear issue and the existing stalemate, it is better that the initial confidence-building measure starts by cooperation in the regional issues, such as the Syrian crisis, which seem to be dealt with easier.

In March 2009, I wrote an article titled “Only a Strong Iran Will Talk” in which I argued that the political-security developments in post-invasion Iraq increased Iran's regional role and strength providing a sense of “political parity” among the Iranian political-security elites, a situation that led Iran to accept the three rounds of direct talks with America on Iraq's political-security issues. Iran concluded that it can only solve its strategic discrepancies with the United States through an active presence and by a strengthening its position on regional issues.

Yet, in the course of Iran-US talks, as I argued in an April 2013 Al-Monitor article, it appeared that regional issues can only act as triggers for initiating strategic talks between the two sides, not necessarily having the potential to lead the two sides to a grand deal.

The reality is that the Iranian political-security elites have reached a point at which having a strong position on regional issues will help them solve their strategic discrepancies with America on the nuclear issue. They know well that Iran’s strategic value in the region lies not only with its geopolitical advantage, but with its traditional relations with ideological allies such as Hezbollah, and friendly states such as Syria and Iraq. This is unlikely to change even in Rouhani’s time. Therefore, bringing the regional issues in the package for future negotiations, although very attractive, has its own complexities to possibly sabotage the process of nuclear talks.

To avoid the complexity of handling the regional issues and in order to ease US pressures, Rouhani should prioritize the nuclear talks as an urgent and strategic matter, especially as there is already a political consensus among Tehran’s political-security elites for initiating talks with Washington. Meanwhile, Rouhani also knows that in order to satisfy the demands of Iranian political-security elites in any possible direct talks with the United States on the nuclear issue, he needs to continue strengthening Iran’s current regional policy. He has already stated that Iran would support finding a political solution for the Syrian crisis based on the will of the Syrian people, and that he is against any foreign military intervention.

Now that Iran has a pragmatic, experienced president with a clear mandate to initiate direct talks with the United States, the Barack Obama administration should take advantage of this situation and seize the “sanctions and diplomacy” approach for a moment, thus laying the groundwork for the success of the nuclear negotiations in an incremental manner. Further political and economic pressure on Iran will surely reverse the current positive atmosphere in Iran in favor of the political forces against restoring relations with the United States.

Kayhan Barzegar is the director of the Institute for Middle East Strategic Studies in Tehran and a former research fellow at Harvard University. He also chairs the Department of Political Science and International Relations at the Islamic Azad University in Tehran.