Local municipalities in Lebanon’s villages are launching campaigns to promote agriculture and self-sufficiency amid food insecurity and deteriorating economic conditions. 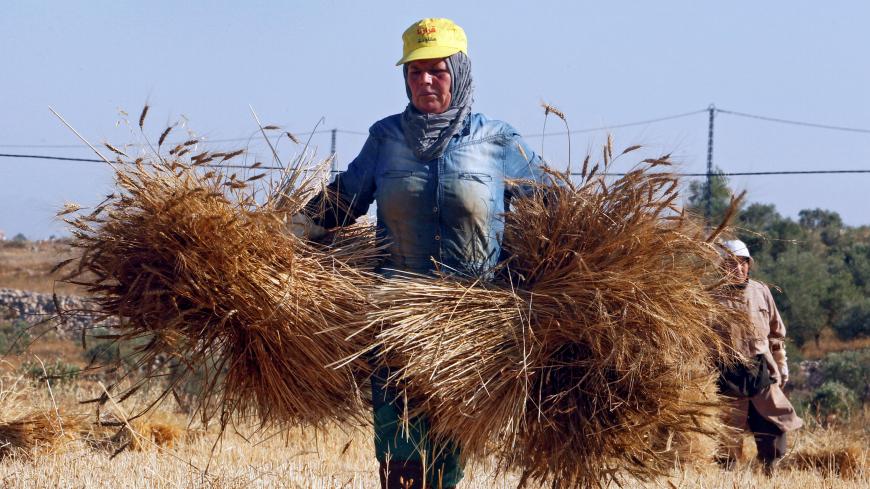 A century has passed since a famine hit Lebanon during World War I and killed one-third of its citizens between 1915 and 1918. Today, the Lebanese are afraid history might repeat itself, with the deteriorating economic situation that has cost many employees, teachers and workers in restaurants and hotels their jobs or led to slashing their salaries by half.

The Beirut-based InfoPro Research, which offers information on real estate, finance and economy, conducted a study at the end of November that showed “10% of companies have temporarily or permanently ceased operations since October 17 [when nationwide protests erupted]. More than 160,000 people were laid off of their jobs.”

Citizens living in poverty amount to 30%, according to World Bank estimates posted on its website Nov. 6, which also pointed out that a 30% devaluation of the Lebanese pound will lead to over 50% poverty levels.

The tough living and economic conditions have fueled the concerns of the Lebanese people who are worried about their food security and about making ends meet. According to a World Food Program report posted online and updated in November, “49% of Lebanese are worried about access to food.”

In that context, campaigns have been launched in several Lebanese areas to encourage agriculture and invest in this sector for self-sufficiency. The prices of imported foodstuffs are on the rise due to the increasing dollar exchange rate, which now fluctuates between 1,950 and 2,050 Lebanese pounds at money exchange offices, after it was fixed at 1,500 pounds for years. The agricultural sector in Lebanon is also weak, while imports cover 80% of the country’s food needs.

Khaled Abu Kroum, campaign activist and member of the municipality of Mazraat El Chouf, told Al-Monitor that they have been ploughing and planting the land since mid-November. He said, “The project’s main aim is to help the poor who are struggling, given the high prices of main food items and legumes. The price of bulgur — which is used a lot in the making of food in villages — rose by 2,000 pounds, as did the prices of sugar, legumes, vegetables, fruits and coffee that increased by $1 at least. ”

He said that the town's residents are cooperating and that many have made their lands available for planting. Those in charge of the campaign talked to the villagers to offer their lands, which have not been planted for years, for investment. These people would in return handle the planting and ploughing, and landowners would benefit from the produce. A villager called Chadi offered his tractor for free twice a week to plough the land and prepare it for growing seeds.

Abu Kroum said that in mid-November, Walid Jumblatt, leader of the Progressive Socialist Party, offered a ton and a half of wheat to the town, where up to 25,000 square meters (6 acres) of seeds were sown since the beginning of the campaign. In the next stage, the organizers of the campaign will plant fava beans, peas and other staple legumes that the people consume, and they will offer them for free after the harvest. If the economic situation improves and people reach self-sufficiency, the crops can be sold outside the town.

Lebanon is committed to implementing the sustainable development plan as part of the United Nations Economic and Social Commission for West Asia’s food and security strategy in Lebanon, which aims at fighting poverty. The organization noted in May 2016 that agriculture had dropped from 23% of the gross domestic product at the end of the civil war in 1990 to 4%, which is still roughly what it stands at today.

In the Bekaa Valley, the Litani River Authority, which is a public institution whose main mission is to implement the Litani River project for irrigation, drying, electricity and potable water, asked the Lebanese Agricultural Research Institute to grant it 4,000 kilograms (8,800 pounds) of common wheat seeds to plant 15 hectares (37 acres) of lands affiliated with it. The authority then planted 32 dunams (8 acres) of wheat in Bar Elias, 51 kilometers east of Beirut, and prepared lands in the surroundings of Qaraoun Dam in the west Bekaa Valley to plant wheat, to benefit from the lands and maintain food security.

Ali Ibrahim, head of the Bakery Owners Syndicate, told Al-Monitor that the imported wheat reserves are sufficient for now, despite the rise in campaigns calling on people to plant. He noted that Lebanon imports wheat from countries such as Kazakhstan, Russia and Ukraine.

Regarding the price hike, he said, “Wheat is being traded on the international stock market.”

The price of a bread bag has increased without any official announcement indicating that. Ibrahim said that some bakeries have reduced the weight of a bread bag from 1,000 grams (2.2 pounds) to 880 grams (1.8 pounds), noting that some bakeries have taken this step to prevent shutting their doors. The official price of a ton of flour is 550,000 pounds ($365), but it is being sold at 610,000 pounds ($405), due to the informal dollar exchange rate ranging between 1,950 and 2,050 pounds, compared to the official 1507.5 rate.

The Lebanese have also noticed a rise in the prices of chicken and other meat. In this regard, head of the Syndicate of Poultry Samir Qortbawi told Al-Monitor, “Lebanon has self-sufficiency in its poultry, as it includes 1,000 farms. But farmers are not able to get corn and soy that are imported and constitute primary material for poultry farming.”

Rab El Thalathine municipality in the district of Marjayoun, 97 kilometers (60 miles) from Beirut, posted Nov. 19 on its Facebook page calls to its residents to participate in ensuring food security in the village; each citizen who owns land was asked to plant a type of legume (lentils, wheat or chickpeas).

The municipality also mentioned the planting and maturing dates of some crops, including onions, garlic, lettuce and potatoes.

Other municipalities in south Lebanon followed suit, such as Zawtar al-Charqiyeh municipality in Nabatiyeh district, 75 kilometers (47 miles) south of Beirut. Its head of municipality Wasim Ismail told Al-Monitor, “The agricultural campaign in the village is a development plan that was approved over a year ago, but the economic situation in Lebanon expedited its implementation.”

He noted that the municipality supports farmers and citizens who want to offer their lands by providing them with seeds and pesticides to protect crops. The municipality distributed 4,000 kilograms of wheat and lentil seeds to citizens and offered vegetable seeds to over 200 families. The municipality is working on building a cow farm, and each villager has the right to invest in 10 cows. He said, “There is a plan to sell all agricultural production by marketing products in the municipality’s annual expo.”

Ismail noted that many inhabitants raise bees to produce honey and others plant wide stretches of thyme. He said, “The municipality organized Dec. 2 a seminar about the importance of agriculture and how to implement agricultural projects, in which 200 farmers participated. Even the youth were interested.”