Israel to further tighten the noose on Hamas

As a part of the financial restrictions on Hamas, Israel issued a decision to economically pursue Palestinian and foreign figures whom Israel accuses of funding terrorism, and added the president of the Arab Organization for Human Rights on the list of those pursued. 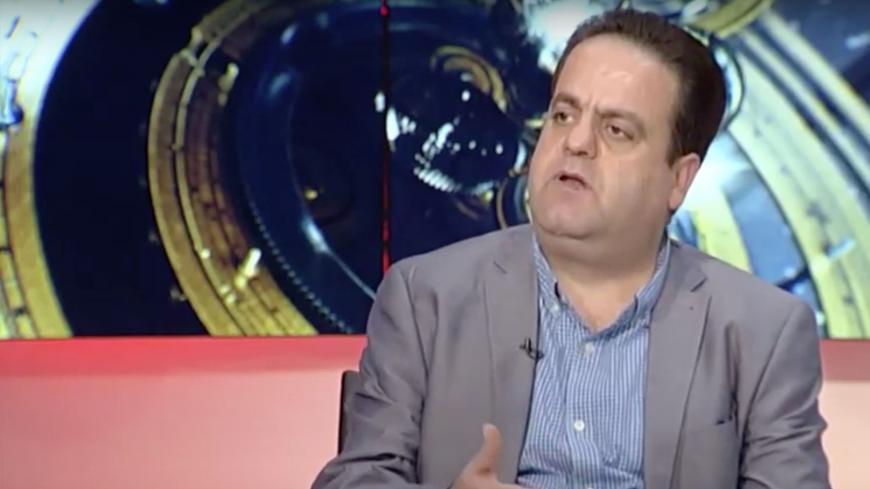 Mohammed Jamil Hersh, president of the Arab Organization for Human Rights in the United Kingdom, seen in a still from a video uploaded April 10, 2014. - YouTube/Al Jazeera Mubasher

The decision includes imposing restrictions on the accused to limit their ability to use their financial assets inside Israel and abroad to fund and support terrorist organizations. Mohammed Jamil Hersh, president of the Arab Organization for Human Rights (AOHR) in the United Kingdom, was the first target out of hundreds, whom Israel said would be added to an online database that anyone could access. Israel accused Hersh of being a member of Hamas.

Israel expelled Hersh, who hails from Nablus city, to Marj Ez-Zouhour locality in south Lebanon in 1992, along with hundreds of Hamas and Islamic Jihad leaders. Subsequently, Hersh moved around several countries in the world and finally settled in the United Kingdom in the early 2000s.

In early November, Israel announced dismantling a network that smuggles money from Iran to Hamas in the Palestinian territories, and arresting several Palestinians who work as money-changers in the West Bank and who transfer money to Hamas through crossings with Israel or through banks under the guise of charities.

Al-Monitor tried to contact Hersh repeatedly but could not reach him; he has refused to talk to the media since the Israeli decision against him was issued.

Atef Adwan, Hamas leader and head of the Economic Committee of the Palestinian Legislative Council, told Al-Monitor, “The Israeli decision is silly and reflects how annoyed Israel is at Hamas’ ongoing activities in the West Bank and the Gaza Strip, despite the financial blockade from the Palestinian Authority [PA] and Israel.”

He added, “I do not have information about whether Hersh is a member of Hamas or not, but Israel will be held completely accountable for any harm caused to him or any names that will potentially be listed in the database. Israel and the United States classify any effort that the Palestinians make around the world to support their cause as 'terrorism.'”

On Oct. 23, the US Treasury froze the accounts of three Palestinian businessmen from the Gaza Strip on the grounds of transferring money from Iran to Hamas in the Palestinian territories. The treasury claimed that the three men had transferred millions of dollars to Hamas through their bank accounts in the United States in the past years.

Speaking to Al-Monitor, Palestinian Minister of Justice Mohammed al-Shalaldeh called on the countries with Palestinian nationals accused by Israel to protect them from legal pursuit or assassination. He argued that Israel’s accusations mainly stem from those people’s legal efforts and exposure of Israeli crimes against the Palestinians.

The Qatari aljazeera.net website cited Dec. 5 an AOHR source saying that the Israeli decision will not break the will of the organization’s employees or scare activists and advocates of Palestinian rights. During the coming stage, qualitative steps will be taken to reveal Israel’s strategy to foil any legal action against it, the source said.

Salah Abdel Ati, head of the International Commission to Support the Palestinian Rights, told Al-Monitor that the Israeli decision aims at obstructing and freezing the work of figures and organizations advocating the Palestinian cause around the world. Such organizations and figures have made great strides in exposing Israeli crimes, he noted. For example, Israel expelled Omar Shakir, director of Human Rights Watch for Israel and the Palestinian territories, on Nov. 25 after accusing him of supporting the boycott, divestment and sanctions movement.

Abdel Ati warned against security risks that might affect those who will be included in the Israeli database, especially as Israel has accused many of them of supporting Palestinians and disbanded their organizations or arrested their representatives. An example would be Israel’s arrest of Mohammad Murataja, representative of the Turkish TIKA charity in the Gaza Strip, on Feb. 12, 2017, as he was leaving Gaza to Turkey through the Erez border crossing. He was sentenced to nine years in prison for funding Hamas.

On May 5, Israel assassinated Palestinian money-changer Hamed al-Khodari by targeting his car with rockets in the center of Gaza City, in the first Israeli killing of people accused of funding Palestinian factions. Israel had accused Khodari’s company in June 2018 of transferring money from Iran to Hamas in the Gaza Strip.

Israeli pursuits of Hamas’ funding sources, the dwindling Iranian support since 2012 and financial sanctions imposed by the PA on the Gaza Strip since March 2017 are all factors that affected the movement in recent years and put it in the throes of a financial crisis that has prevented it from paying the full salaries of its employees since 2014. In February, Hamas shut down several media corporations affiliated with it in order to reduce its expenses.

Ibrahim al-Madhoun, a political analyst who is close to Hamas, told Al-Monitor that the Israeli decision did not surprise Hamas, as Israel took similar steps years ago to besiege the movement financially. He said that Israel is convinced that funding is as important as weapons for Hamas to boost its power.

Madhoun clarified that Hamas managed to adapt to the financial blockade by rationing expenses and seeking new sources of funding, and that a lot of the funds that Israel claims to have seized were in fact already processed to charities and to the poor in the West Bank and the Gaza Strip.

Israeli steps to besiege Hamas financially will continue, but the movement will also increase efforts to seek new funding sources. Izz ad-Din al-Qassam Brigades, Hamas’ armed wing, announced at the end of January 2018 receiving financial aid in bitcoin to overcome the financial blockade imposed on it.