Prime Minister Benjamin Netanyahu's quest for immunity from prosecution will dominate the upcoming election campaign, with rule of law at stake in Israel. 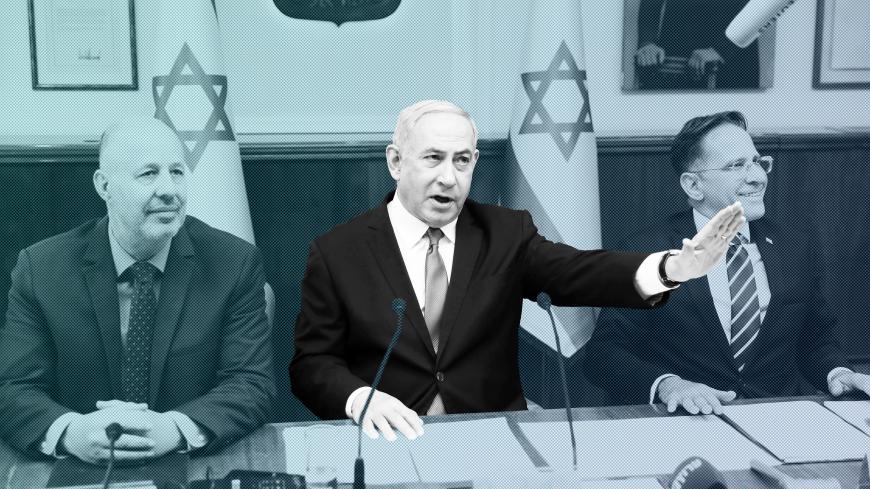 In the afternoon of Jan. 1, just hours before Prime Minister Benjamin Netanyahu faced the cameras and announced that he was seeking Knesset immunity from prosecution, his associates claimed he was still undecided on the matter. They were likely not confused but striving to create the impression that the prime minister, under indictment for bribery, was torn over whether to seek immunity, which means evading criminal prosecution. There was media and public speculation about Netanyahu’s intentions, but he had already decided weeks ago to seek immunity and was waiting for the most appropriate moment, knowing the issue was explosive.

His first task was winning his Likud's Dec. 26 leadership primary. Then he waited several more days, until less than four hours from the 30-day deadline set by law for submitting an immunity request. When Netanyahu finally faced the public shortly before the midnight deadline, he soft-peddled his immunity request, arguing that his indictment had not been filed “in good faith.” The charges against him were trumped up, he said, explaining that he was merely taking advantage of his legal right to continue serving the people and leading them to greater prosperity.

Netanyahu also had to explain why he had allegedly lied before the April elections when he indicated that he would not seek immunity. He had responded, “What? No way,” to an interviewer who asked him whether he would try to prevent his prosecution. This week, he provided a convoluted version according to which he had been telling the truth at the time and claimed the question had been slightly different.

Netanyahu’s immunity speech was not designed to win over voters from the centrist Blue and White Party, but rather to forestall defections from the so-called soft right, which might be put off by voting for a prime minister indicted for bribery, fraud and breach of trust and trying to evade the law. Blue and White chair Benny Gantz responded to Netanyahu’s nationally televised speech, “Netanyahu knows he is guilty. … Such immunity is corruption,” he said.

Polls conducted a day after the immunity speech showed that Netanyahu’s voters are on board. Results aired on Channel 12 and Channel 13 News indicated that support for the Likud remained unchanged, with Blue and White still slightly ahead. Netanyahu's speech did not jar the political stalemate that has Israeli voters almost evenly divided between the right and center-left. One constituency sees a successful prime minister being persecuted by the political left, the media and the state prosecutor; the other sees an opposite image of a prime minister under criminal indictment endangering democratic rule to save his own neck.

In yet another development in the political-legal drama shaking Israel, the country’s top court decided on Jan. 2 to dismiss a petition seeking a ruling on whether Netanyahu could be tasked with forming a government after the March 2 elections given his indictment. The three-member panel ruled that the issue was theoretical and thus premature. Election periods are a "realm of uncertainty," the judges wrote in summing up their decision, adding that “in light of the most sensitive and complicated period the State of Israel is in at this time," it decided to "act with restraint and moderation" and dismiss the petition.

The judges’ ruling is rational. The 2020 elections will be the first in Israeli history to focus on the rule of law. Never has the Israeli public been so engaged on the issue. Past election campaigns with a rule of law or public corruption agenda failed to interest voters. But just as the 2011 protest movement shaped the 2013 elections around economic issues, Netanyahu’s indictment has made the debate on law enforcement and equality a hot electoral agenda item.

Netanyahu’s persistently high ratings and his oratory talents have turned the Supreme Court, the state prosecutor and the police into players on the political battle field. Netanyahu has been indoctrinating his followers for the past two years for just this moment, finding a receptive audience with declining public trust in these institutions. The police and state prosecutor have been repeatedly exposed as making arbitrary decisions and enjoying unsupervised power.

Netanyahu has never seemed interested in such matters. On the contrary, until his legal entanglement, he had defended the legal system and blocked eager Likud Knesset members such as Yariv Levin and Zeev Elkin from advancing laws limiting the authority of the Supreme Court. Nevertheless, now Netanyahu has named a justice minister to his interim government who has been aggressively combative against the system. Since his appointment six months ago, young Amir Ohana has become the darling of Likud members, reflecting the attitude within the ruling party toward the country’s legal and law enforcement institutions.

Never before had Likud voters demonstrated against the state prosecutor and the Supreme Court, and now they are doing so week after week, mobilizing an impressive presence of thousands of protesters. This agenda enjoys the full support of Netanyahu and his allies from the ultra-Orthodox and far-right parties, all of which have been working the persecution angle. These parties, which control 55 seats out of 120 in the legislature, are all expected to vote in favor of immunity for Netanyahu. Netanyahu is telling voters: You want me for another term? Vote for the ultra-Orthodox-right-wing bloc of parties so that I can muster a 61-seat majority in favor of immunity from prosecution.

On the other side of the aisle, for both Blue and White and hawkish Avigdor Liberman (who has announced his Yisrael Beitenu would vote against immunity), Netanyahu’s effort to evade the law and his war against law enforcement have yielded an electoral bonanza. These latest developments are generating a sense of urgency among many voters, and Blue and White will keep the issue high on the campaign agenda.

Although the United States' Jan. 3 assassination of Iran’s Quds Force commander Qasem Soleimani is focusing attention on the defense arena and boosting Netanyahu as Mr. Security, the 2020 elections two months from now will revolve around his immunity.