Prime Minister Benjamin Netanyahu continues to delegitimize Israel’s judicial system, saying that only the judgment by the "people" matters. 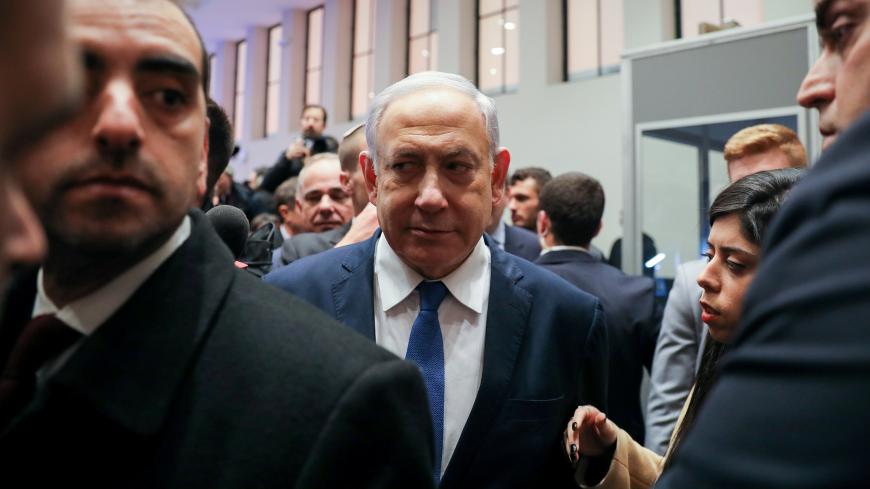 Israeli Prime Minister Benjamin Netanyahu is seen following the signing of a deal with Greece and Cyprus to build the EastMed subsea pipeline to carry natural gas from the Eastern Mediterranean to Europe, at the Zappeion Hall, Athens, Greece, Jan. 2, 2020. - REUTERS/Alkis Konstantinidis

An election campaign is “a realm of uncertainty,” wrote three Supreme Court justices on Jan. 2. The judges dismissed a petition by opposition parties that sought to disqualify a Knesset member charged with grievous offenses, i.e., interim Prime Minister Benjamin Netanyahu, from forming the country’s next government. The justices agreed with Attorney General Avichai Mandelblit, who already declined to rule on the issue, saying it was theoretical given that elections would only take place on March 2. The justices, too, pointed out that a ruling would be premature given that no one can know who the elected lawmakers will recommend to President Reuven Rivlin as prime minister.

True, there is no certainty that Netanyahu would obtain a Knesset majority ensuring that Rivlin would task him with forming a government. The justices may assume (or hope?) that Netanyahu’s indictment on charges of bribery, fraud and breach of trust would limit his chances of receiving the presidential mandate to form a government. When Rivlin handed him the mandate after the April 2019 elections and again after the September voting, Netanyahu had not yet been indicted and was awaiting a hearing before the attorney general to lay out his case against indictment.

Nonetheless, while ruling the petition premature, the justices left open the door to revisiting the issue in the future, rejecting claims by Netanyahu and his Likud party that the issue was not under the court’s jurisdiction because in a democracy the “people” decide who rules them, not the court. The judges essentially said that even if the “people” decide to anoint an indicted criminal to rule them, the court is authorized to subvert the will of the people.

The prime minister and his aides probably noticed that in dismissing the petition, the justices nonetheless wrote that the probity of elected officials falls within their purview since it “touches on the core of the fundamental values on which our legal system is based.” There is more than a hint in this remark that the judicial branch also views itself as authorized to overturn a potential future decision by the Knesset to grant Netanyahu’s request for immunity from prosecution on charges of corruption. In other words, even in the “realm of uncertainty," there are limits dictated by morals and values. The ultimate authority to block politicians seeking to breach them (still) rests in the hands of the top court of justice.

Netanyahu then repeated his populist and dangerous claim that “in a democracy, only the people decide who will lead them. I have a right, a duty and a mission,” he added, “to continue serving you for the future of Israel.” What he meant was that anyone who seeks to stop him, is hurting “you, dear citizens of Israel.”

As the justices noted in their decision, stating the obvious, under Israel’s political system, the voters elect party slates, not prime ministers. In other words, even if Netanyahu and his right-wing and ultra-Orthodox allies garner the equivalent votes of a 61-seat Knesset majority to recommend to the president that he task Netanyahu with forming the next government, the will of the voter will not be subverted if Rivlin gives the nod to another elected Knesset member from that bloc of parties. What's more, if the president decides to hand the task to a lawmaker under criminal indictment, the Supreme Court could still invalidate his decision and demand that he gives the mandate to another lawmaker from the majority bloc.

That's why Netanyahu has an interest in turning this election campaign from his personal battle for survival and an interest shared by his party and his allies into a civil war. On one side of the equation he places the “dear citizens of Israel” to whom “I dedicate my life.” On the other side are the evil law clerks waiting to ambush him (including those he personally appointed, such as the attorney general and the former chief of police). Alongside them he puts the “treasonous (Arab-loving) left,” which always goes hand in hand with the hostile media — excluding pro-Netanyahu outlets such as Israel Hayom newspaper, Channel 20 television, and Netanyahu’s court pundits Amit Segal, Shimon Riklin, Sharon Gal, Yaakov Bardugo, and others.

“Do not let the media and the left mislead you,” the indicted politician warned the “dear citizens of Israel.” As Haaretz columnist Rogel Alpher recently wrote, in Netanyahu’s book, left-wing voters and the media are not among the citizens of Israel to whom the prime minister devotes his life. “You know the truth,” Netanyahu told his voters, “we are the majority of the people and only the majority will decide. You will decide, only you.”

The 2018 documentary “King Bibi” directed by Dan Shadur presents some of the “you” who know the truth and are the ones and only ones who should decide whether an indicted politician should lead the state. An opinionated citizen explains in the film that “we need a prime minister who will face the entire world, not a sucker. Someone who knows how to lie a bit. A son of a bitch, a bastard.” This incredible insight must be combined with music notes and turned into the official election-campaign tune of the Likud.