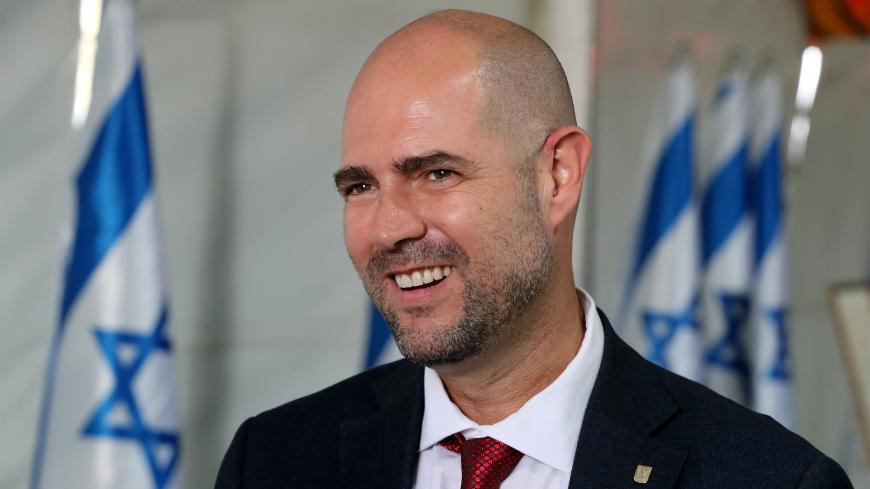 Hundreds of Likud members jammed an events venue in the suburban Tel Aviv town of Petah Tikvah in the evening hours of Dec. 18 for yet another of the many party primary rallies being held these days for Prime Minister Benjamin Netanyahu. When he started speaking, many of them called out, “The people are sovereign,” “The people demand legal justice” and “Ohana is king.” They were referring to Amir Ohana, whom Netanyahu appointed justice minister in his caretaker government in June.

From the get-go, the appointment was Netanyahu’s way of poking the country’s legal system in the eye just weeks before the start of legal proceedings against him on suspicions of corruption. His young associate Ohana was already known for his confrontational rhetoric against the “legal junta” allegedly running the country. He defended Netanyahu and lashed out at the state prosecution at every opportunity.

After six months on the job, Ohana, 43, is one of the most popular ministers in the Likud. The Likud rank and file regard the son of immigrants from Morocco who grew up in the southern town of Beersheba as an authentic representative. Many outside the Likud also identify with him. Ohana has also upgraded his status among the ideological, religious and right-wing constituency, which appears untroubled by his being a declared homosexual raising two children with his partner. In the view of this constituency, Ohana has managed to stand tall and expose what it sees as the legal system’s two-faced persecution of the right-wing regime. Ohana offers Likud members a more militant model of former Justice Minister Ayelet Shaked. Shaked had also constantly challenged and provoked the courts and the legal system, but she did so in dialogue with those at its helm and minimized her open clashes with them.

Ohana is a whole different story. He sparks disagreement and emotions on the left side of the political map, and also among the “soft” moderate right, which regard his behavior as deeply harmful to the independence of the rule of law and democracy. On social media, his fans hail him as a “king” and “killer,” while his detractors denigrate him as a “rotten villain.”

Ohana has become a nightmare for the state prosecution and law enforcement authorities, against whom he has declared open season and war. Invoking deep-state allusions, he referred, for example to “a prosecution within the prosecution” that was targeting Netanyahu. His latest challenge against the system came this week with his decision to appoint Orly Ben-Ari Ginsberg, the deputy Tel Aviv district prosecutor, as acting state prosecutor to replace Shai Nitzan, whose term ended Dec. 15. Ohana did so despite, and perhaps because of, the firm and clearly stated objection by Attorney General Avichai Mandelblit, who does not believe a third-tier candidate is qualified for the high-ranking post at such a sensitive time. Ohana knew he was playing with fire, but did not fold. He had come prepared. His candidate, he insisted, was the flesh and blood of the state prosecutor’s office, a 28-year veteran of the system with extensive experience, especially in the field of security. Mandelblit, on the other hand, said the appointment “grossly defies the bounds of reasonableness” given that Ben-Ari Ginsberg had failed three times in her bid for the district prosecutor’s job. Mandelblit said he would refuse to defend the state against Supreme Court petitions filed against the appointment.

On the morning of Dec. 18, just minutes before the start of the sendoff ceremony for Nitzan and the swearing-in of Ben-Ari Ginsberg, reporters informed Ohana that the Supreme Court had just ordered the appointment suspended. The ensuing embarrassment was obvious. The country’s incumbent legal and law enforcement elite had assembled, Ben-Ari Ginsberg arrived with her family and prepared to deliver a speech, but that did not happen. There was no longer anything festive about the event. “You will be hearing about her in the future,” Ohana said with barely repressed rage. Mandelblit kept up his militant stance, saying in remarks to the audience that he was determined to fight against the appointment because it had been made for the wrong reasons. An independent legal system, he added, “is far more important than any personal interest. Unfortunately, there are those who confuse support for the system with moral corruption. The state prosecution will continue to be a dignified, apolitical body,” he said.

Senior Likud politicians were quick to rush to Ohana’s defense and attack the state prosecution. Minister Yariv Levin, who has been conducting a crusade against the Supreme Court for a decade and has campaigned for legislation to limit its powers, wrote on Facebook, “Although it is not surprising, it is outrageous. I back my friend Minister Ohana who made use of his authority as justice minister and executed the appointment which would have been taken for granted in any other country.”

It would be a mistake to regard these events merely as a reflection of attempts by Netanyahu and his supporters to avoid his prosecution. Levin’s comments reflect the climate in the Likud and on the political right. He enjoys great respect and is considered an ideologue rather than a populist politician. When he raised these issues a decade ago, he was considered a marginal figure in the party. Netanyahu himself made it a point to block all his legislative initiatives and those of his fellow minister Ze’ev Elkin designed to limit the powers of the top court and amend the judicial appointments process. Now Netanyahu, under indictment on a charge of bribery, is the poster boy for that same agenda and he is operating on fertile ground prepared for him over the years by Levin and his party colleagues.

The upcoming election campaign is already being overshadowed by an all-out war between the legal system and politicians on the right, led by Netanyahu. The overarching goal of garnering sufficient votes to ensure a 61-seat Knesset majority on March 2 is not just to ensure immunity from prosecution for Netanyahu but also to radically transform the state’s legal system.