In the aftermath of massive protests that saw hundreds killed in Iran, the Islamic Revolutionary Guard Corps is still casting blame for the violence outward and warning Western and "hostile regional countries" against provoking unrest in the nation. 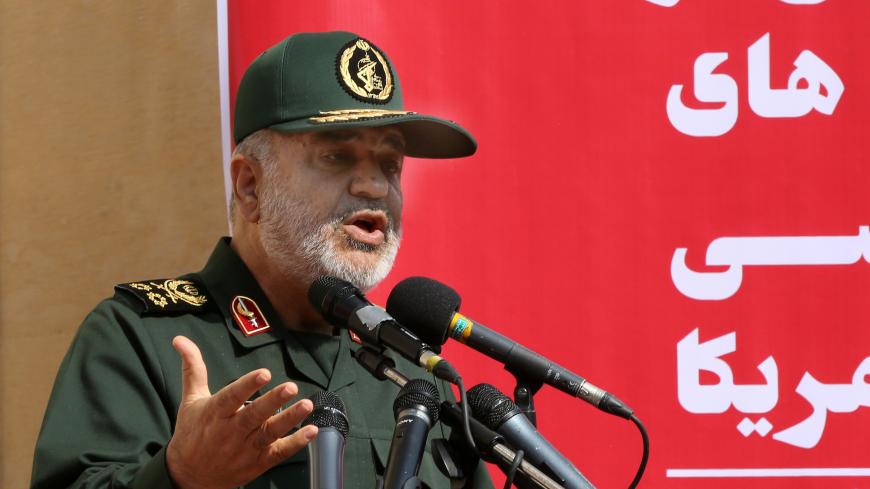 IRGC commander Hossein Salami speaks during an inaugural ceremony unveiling new murals painted on the walls of the former US embassy in Tehran, Iran, Nov. 2, 2019. - ATTA KENARE/AFP via Getty Images

The head of the Islamic Revolutionary Guard Corps, Hossein Salami, issued a warning to the United States about provoking unrest in Iran.

Iran was rocked by protests Nov. 16 after President Hassan Rouhani announced fuel subsidy cuts, leading to sharp increases in the price of gasoline. According to Amnesty International, over 200 people were killed and thousands were arrested in the ensuing crackdown. While some authorities acknowledged that the rollout of the fuel subsidy cuts was mishandled, many continued to blame Western and regional countries for promoting unrest in the country.

Speaking to a crowd of IRGC officers and Basiji members in a Tehran suburb Dec. 12, Salami said, “Putting down the sedition is a testament of loyalty to the nation and we say to our enemies: We will pursue you, find you and get our revenge.” Iranian officials often refer to protests as “sedition.” Salami continued, referring to the United States, Israel, the United Kingdom and hostile Arab countries in the Persian Gulf, “If you do not stop with the seditions, we will burn down your interests, and this is our final word.”

The Iranian government has not yet released any official statistics on those killed, arrested or wounded as a result of the November protests. Ali Shamkhani, secretary of the Supreme National Security Council, said Dec. 12 that 85% of those killed in Tehran province during the protests were not physically present at the protests. He said that these individuals were killed under “mysterious circumstances with firearms and [knives].” According to Shamkhani, this discrepancy is clear evidence of “a killing project from hostile regional countries.”

Shamkhani went on that according to the orders of Supreme Leader Ayatollah Ali Khamenei and President Hassan Rouhani, the governors of Iran’s provinces have formed special committees to assess the property damage from the protests in order to begin repairs and compensate losses.

A major aspect of Iran’s crackdown on the protests was the immediate and near total blocking of internet access. The decision sparked conversations about the possibility of Iran installing a national intranet to avoid having to make such a decision in the case of future protests. The internet blackout incurred major costs, including losses of revenue for businesses that rely on the internet, even for a country like Iran, where internet penetration is not as high as some Western countries.

At a Dec. 11 cabinet meeting, Rouhani spoke about the importance of the internet. In response to whispers that Iran would once again block access said, “Do not pay attention to these rumors.” Rouhani continued, “If we announce that we intend to strengthen the national information network, the enemy will claim that we want to shut down the foreign internet, whereas it is not like this at all.”

Rouhani added, “Our intention is to have, alongside the foreign internet, a strong and able national information network so that people can use both.”