The head of the Islamic Revolutionary Guard Corps, Mohammad Ali Jafari, warned that the United States will use the post-nuclear deal climate in Iran to gain influence in the country. 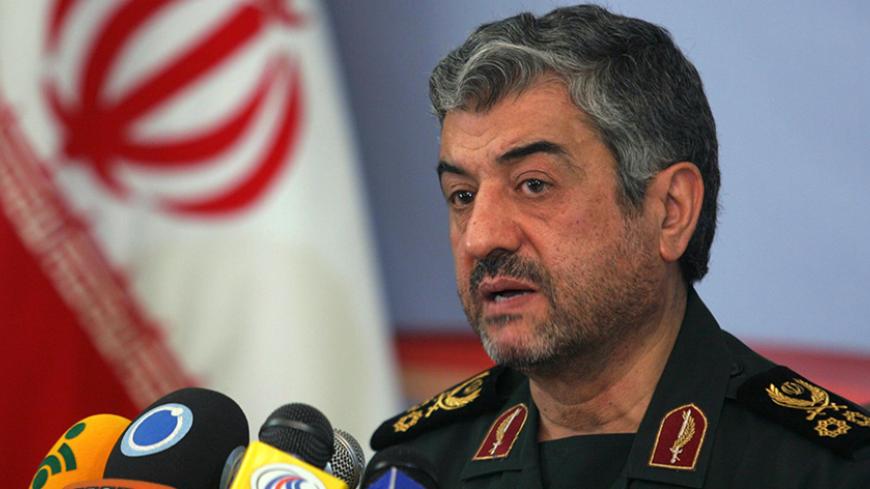 As Iran began the preliminary implementation of the nuclear deal with the six world powers on Nov. 2, the head of the Islamic Revolutionary Guard Corps (IRGC), Mohammad Ali Jafari, warned of a weakening revolutionary zeal inside the country after the agreement. His warning reflects the position of those concerned about American influence in the country given that tensions and the possibility of a war post-deal have decreased dramatically.

Speaking at a conference described by hard-line Mashregh News as “the first anti-American gathering after the nuclear agreement,” Jafari said that there had been one “sedition” in each decade since the 1979 revolution. He said the fourth sedition will use the case that Iran’s nuclear program is an excuse to force the country to sit down at the negotiation table. He said that the United States intends to use the negotiations to penetrate Iran.

By “penetrate” Jafari means to have influence culturally, economically or politically. Given that international sanctions on Iran will be removed, American and Western products can now be legally brought into the country. Along with Western products, the fear of Western or American ideas also being imported to Iranians is a serious concern for Iranian officials who want to maintain the Islamic nature of the country. Jafari warned Iran’s actions must be based on “Islamic ideology,” and enemy countries have tried in the past to convince Iran to put aside its ideological and revolutionary policies.

Jafari warned, “If this belief is created among the people that since on the nuclear deal there is an agreement and so on other issues we can reach an agreement, this is a danger and a sedition.” To counter this, Jafari said that there are “special expectations” on Iranian college students to expose or “take any other actions” against attempts by the United States to influence Iran. This call for Basiji university students to take action against what Jafari called the “soft-war” against Iran should be taken seriously; however, he did warn that “violent action may backfire.”

Jafari said that this sedition “will be long and possibly take many years.” The open-ended warning will not be welcome news to Iranians hoping for a more open political environment after the nuclear deal. The IRGC has been one of the main groups to lead crackdowns on political movements or protests, especially in 1999 and 2009, “the second and third seditions,” according to Jafari.

To gauge how seriously Jafari views “seditions,” he labeled the 8-year-long Iran-Iraq War of the 1980s as “the first sedition.” He said the intention of the enemy was to force the Islamic Republic to “deviate or have fundamental problems.” Jafari said that rather than deviating from its Islamic principles, it was this war that resulted in Iran exporting the revolution to Lebanon, the Gaza Strip and other countries.

Most alarming for Iran’s domestic political environment, Jafari said that during the Iran-Iraq War, “domestic agents did not help the enemy, and the number of fifth columnists were few, but in the following seditions it became more complex.” He said the 1999 student uprising and the 2009 post-election protests were American-backed and that the 2009 election protests were to some degree “more dangerous” than the Iran-Iraq War.

Jafari is not the only individual to warn about Iran’s domestic political environment and allege attempts by the United States to gain influence in the country. In a Sept. 9 speech, Iran’s Supreme Leader Ayatollah Ali Khamenei also warned about America’s desire for influence after the nuclear deal. In a speech Nov. 1, Khamenei also warned against directly negotiating with the United States on regional issues.