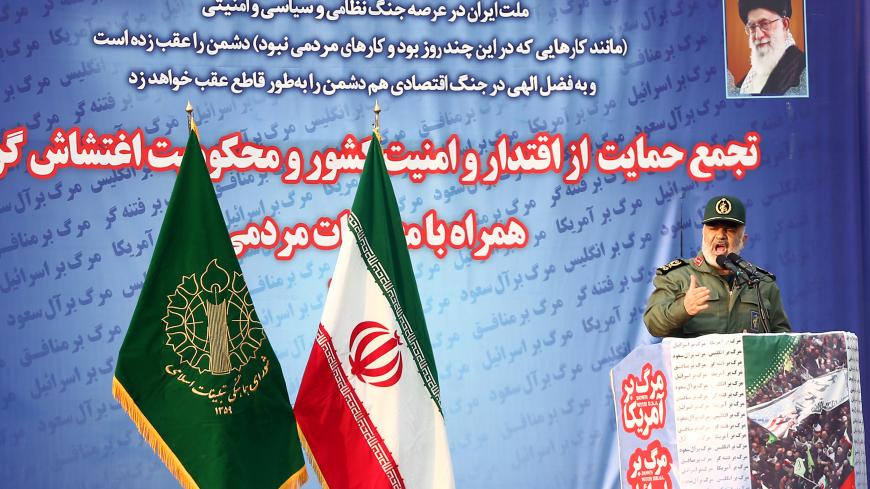 The commander of the Islamic Revolutionary Guard Corps, Maj. Gen. Hossein Salami, delivers a speech at a demonstration in Tehran, Iran, Nov. 25, 2019. - Nazanin Tabatabaee/WANA via REUTERS

After Iranian cities were rocked by protests over the fuel subsidy cut, information out of the country has been scarce due to a nationwide internet shut-down. Government officials have been quiet — aside from making vague statements praising themselves for suppressing the protests — and have not shared many details of the number of deaths or arrests.

According to Amnesty International, there have been 143 deaths from the protests that began Nov. 15 after the administration of President Hassan Rouhani announced the fuel subsidy cut. While government officials have remained tight-lipped about this number, Iranian parliamentarian Ghasem Mirzaei Nikou told journalist Farzaneh Aeini that the number of those killed was more than 130. Nikou added that the number of arrests is unknown.

Ali Asghar Jahanghir, head of Iranian prisons, claimed, “A considerable number of those arrested have been released.” While he did not give a number, he said that three out of 30 Iranian provinces did not have any protest-related arrests. He advised family members of those arrested to contact the judiciary rather than the prisons.

Prosecutor General Mohammad-Jaffar Montazeri met with a number of arrestees at one prison accompanied by a camera crew on Nov. 23. Montazeri addressed the seated prisoners, whose faces were not shown. He said that efforts were being made to address their cases as soon as possible, adding, “Either it was you, or your were provoked by others, or some individuals were doing things behind the scenes.” Montazeri later caused a minor controversy when he claimed that the prisoners were “satisfied” with the conditions inside the prison.

With the protests suppressed and internet access mostly restored, Iranian commanders spoke at pro-government rallies Nov. 25 in a show of power. Commander of the Islamic Revolutionary Guard Corps Hossein Salami said, “We are in a great world war and at this moment you are defeating the arrogant powers.” He added, “The war that was started recently in our streets was an international plot. This war has ended. You acted with precision.” Salami did not elaborate on the "world war" comments but addressed the leaders of the United States, United Kingdom and Saudi Arabia: “If you cross our red lines we will destroy you.”

IRGC spokesman Ramezan Sharif called the protests “unprecedented” and referred to the protesters as “rioters.” He said that protesters had brought “arms with them and had fired in the direction of people, that there was a high level of violence and organized actions.” Deputy IRGC commander Ali Fadavi made similar comments previously regarding armed protesters. Fadavi had claimed that a number of the protesters killed had been shot at close range and from behind, suggesting that it was done by individuals from among the protesters.