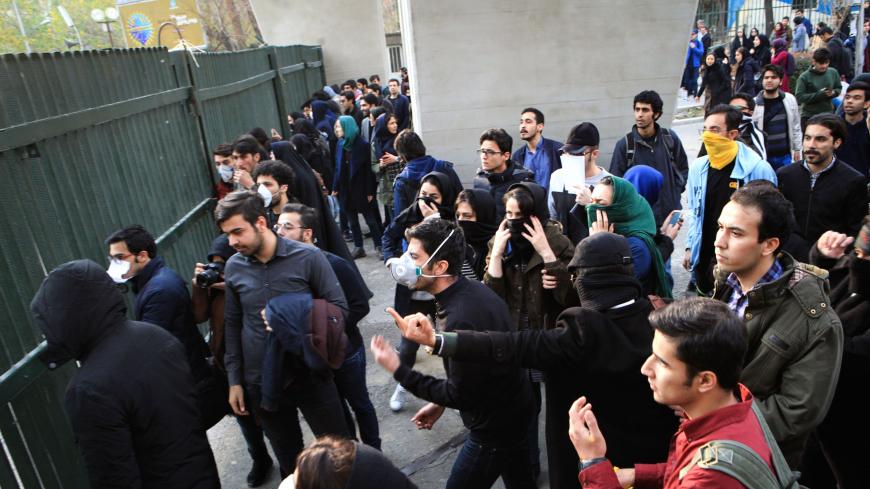 Iranian students protest at the University of Tehran during a demonstration driven by anger over economic problems, Tehran, Iran, Dec. 30, 2017. - STR/AFP/Getty Images

As Iran experiences the sixth day of nationwide protests, Iran’s Supreme Leader Ayatollah Ali Khamenei addressed the ongoing unrest. During his weekly meeting Jan. 2 with the families of those killed in the Iran-Iraq War of the 1980s, Khamenei said that enemies of the Islamic Republic of Iran are using the protests to strike a blow against the government.

“In the events of the last few days, enemies of Iran with various tools at their disposal, such as money, arms, politics and security apparatuses, have allied to create problems for the Islamic Republic,” Khamenei said. As for the cause of the protests, Khamenei noted, “I have some things to say about these matters, and I will speak to the people about them.”

Ali Shamkhani, the secretary of Iran’s Supreme National Security Council, also weighed in on Iran’s protests. “The domestic situation is the lack of approval of a part of the nation over the economic situation,” he said.

Shamkhani also pointed the finger at foreign powers for interfering in the country’s domestic affairs and stirring unrest, saying that a proxy war was taking place against Iran by Saudi Arabia, Israel, the United States and the United Kingdom. “They are trying to collapse the nation from within,” Shamkhani said, adding that 27% of the hashtags related to the Iran protests are originating from Saudi Arabia, whom he has accused of hiring foreigners to undertake the task. Shamkhani also warned Saudi Arabia against getting involved in Iran’s internal affairs.

He said that what is happening in Iran will end in the coming days and that there is no need for concern.

President Hassan Rouhani addressed the situation of the protests earlier in a Cabinet meeting, saying that protesters had a right to express economic grievances but that those who damage property will be confronted. According to Reformist newspaper Ghanoon Daily, Rouhani had recorded a message but the hard-line Islamic Republic of Iran Broadcasting — the nation’s state TV — refused to broadcast it.

During a separate meeting with members of parliament, Rouhani reiterated his positions from his Cabinet meeting. “The people have problems. It’s natural; we have to solve the problems,” Rouhani said. “Therefore, a few have protested and have criticisms. They have a right to criticize, but they have to choose the correct path to express their criticisms.”

Rouhani also said that some have entered the protests to “take advantage” of people and provoke protesters. He also addressed the foreign element to these protests, saying, “We should have prepared ourselves for this. They straightforwardly said that they will take the problems to Tehran. They said it with their own mouths; this is not our analysis.”

Iranian security officials appear to be calm about the protests in Iran — in their statements anyway. Ismaeil Kowsari, deputy commander for Sarallah Base, an Islamic Revolutionary Guard Corps (IRGC) unit in charge of security for Tehran, said that for now Iran’s police forces are conducting security for Tehran. He said that if Iran’s NAJA (Law Enforcement Force) asked Sarallah Base to get involved, the IRGC is ready. But no such requests have been made yet. Kowsari said that if the unrest continues and officials do make such a request, the IRGC would end the unrest.