Intel: How Russia is changing course in Syria 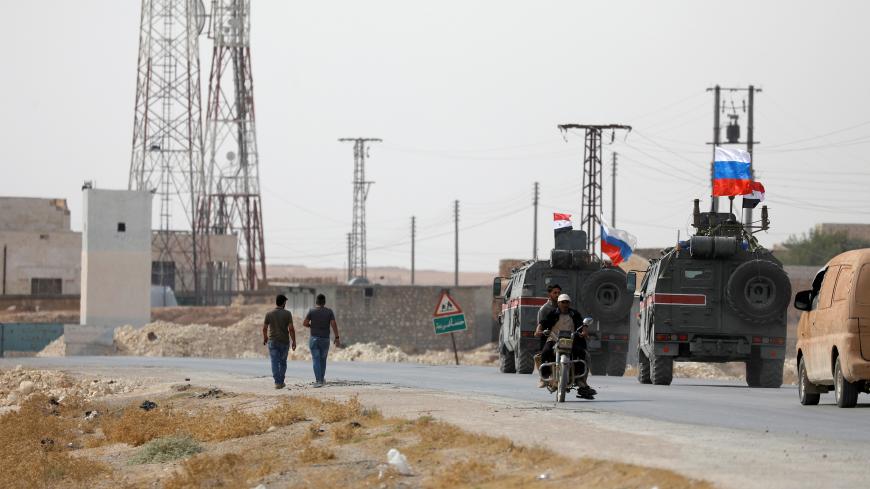 Russian President Vladimir Putin’s Special Envoy to Syria Alexander Lavrentyev and Deputy Foreign Minister Sergey Vershinin traveled to Damascus Dec. 2 to meet with President Bashar al-Assad. A read-out of the visit from the Russian Foreign Ministry said the parties discussed “the necessity to restore Syria’s territorial integrity and unity with due account of the interests of all ethnic and religious groups,” while stressing the importance of further anti-terrorism efforts. The three men also discussed humanitarian aid and progress toward writing a new constitution ahead of elections as called for by the UN Security Council.

Why it matters: On the same day, the commander of Russian forces in Syria, Lt. Gen. Alexander Chayko, met with the head of the Kurdish-led Syrian Democratic Forces (SDF), Mazloum Kobani. Kobani later tweeted in Russian that the two parties had reached a "high level of understanding” and agreed on Russian military deployments in the towns of Amuda, Tell Tamer and Ayn Issa in northeast Syria. “We expect our cooperation to lead to stabilization and peace in our country,” Kobani wrote.

Earlier in the day, a Russian military police vehicle was attacked while on patrol in Syria’s Aleppo province near the border with Turkey. Three officers were injured from what the Russian Defense Ministry called a homemade bomb. The attack embodies Russia’s concerns that its forces may be subject to attack as they establish a foothold in the area following the October deal on northern Syria struck by Russian President Vladimir Putin and Turkish President Recep Tayyip Erdogan.

What’s next: Chayko, 48, was appointed commander of the Russian forces in Syria in September. His predecessor, Gen. Col. Andrey Serduykov, 57, had been serving in that capacity for the previous six months.

Serdyukov’s main task in Syria was to facilitate the implementation of Russian-Turkish agreements on joint patrols in the Idlib de-escalation zone. Following a meteoric rise that saw him appointed deputy chief of the General Staff of the Russian armed forces in February, Chayko is now tasked with implementing Russian-Turkish agreements in northeastern Syria, in particular in the area of Turkey’s incursion against Syrian Kurdish militants close to the SDF.

Russian defense analyst Ruslan Pukhov has described Chayko as being not only a military man but also “a politician and diplomat who successfully deals with tasks of humanitarian and economic nature in Syria.”

Know more: Make sure to read Metin Gurcan’s story on how Turkey seeks to discipline its proxies in Syria and Maxim Suchkov’s own take on the difficult path ahead for Moscow and Ankara in Idlib.