Will Egypt heed US threat of sanctions for Russian jet deal?

A $2 billion arms deal between Russia and Egypt has caused the United States to warn Egypt against acquiring Russia’s Su-35 fighter jets, raising questions about whether Egypt will carry on with the deal. 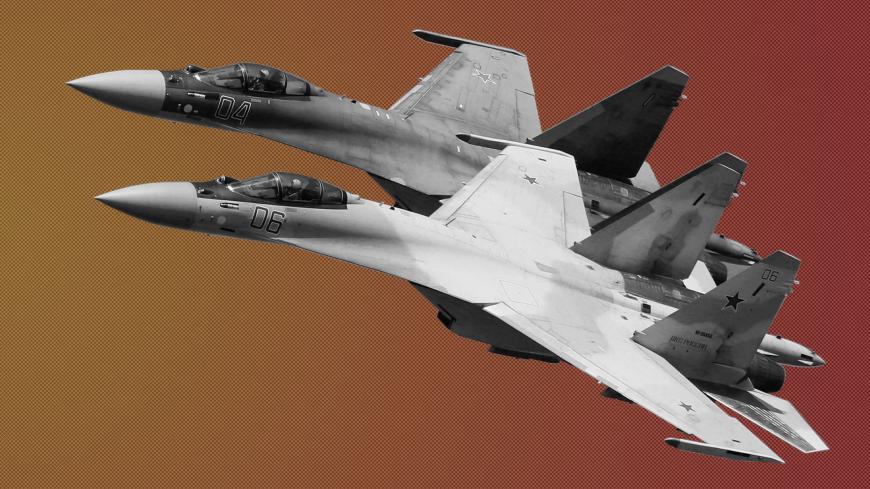 Sukhoi Su-35 jets fly in formation during a rehearsal for the airshow in Krasnoyarsk, Russia, Aug. 1, 2019. - REUTERS/Ilya Naymushin

CAIRO — Despite threats of US sanctions, Egypt reportedly will obtain two Russian Su-35 fighter jets in early 2020 as part of a $2 billion deal it signed earlier this year; it will receive more of the planes in batches.

Expert Magazine, a Russian weekly business publication, reported Nov. 21 that delivery of the first pair of jets is expected at the beginning of next year. The contract includes an estimated two dozen more.

In the meantime, Washington is seeking to thwart the deal. R. Clarke Cooper, US State Department assistant secretary in the Bureau of Political-Military Affairs, told the press Nov. 18 at the Dubai Airshow that the purchase could result in Cairo being placed under sanctions and prevented from making future military purchases from the United States.

US Secretary of State Mike Pompeo and Secretary of Defense Mark Esper warned Egypt on Nov. 14 against buying the Su-35s. The Wall Street Journal reported that they delivered to Egypt warning messages that “major new arms deals with Russia would — at a minimum — complicate future US defense transactions with and security assistance to Egypt.” The US officials warned that “Egypt risked sanctions under a US law barring purchases of Russian military equipment.”

The US warnings were issued after Russian Defense Minister Sergei Shoigu made an official visit Nov. 12 to Cairo, where he met with President Abdel Fattah al-Sisi and affirmed that “Russia is ready to assist in strengthening Egyptian military forces and defense capabilities.”

The relevant Egyptian authorities have not issued any reply to the US warnings. Nevertheless, an Egyptian official who declined to be named told The Daily News Egypt on Nov. 17, “Egypt is an independent state that does not take orders from any other countries with regard to its foreign and domestic policies.” He added, “Egypt does not interfere in any country’s domestic or foreign affairs.”

He further said the US warning is “meaningless” and “should not be taken seriously,” and he indicated the deal is ongoing and will not be suspended no matter the circumstances.

At a time when some observers believe the US administration's warning is only designed to check the pulse of the Egyptian side, Maj. Gen. Gamal Mazloum, a military expert and adviser at Nasser Higher Military Academy, told Al-Monitor the US warning is clear: The deal should be suspended; the United States won't allow the deal to be implemented and will seek to foil it by all possible means, including the imposition of military and economic sanctions in the event Egypt doesn't back down.

Mazloum noted that Turkey bought Russian S-400 missile defense systems this year despite US warnings and plans to buy more. So far, however, the United States hasn't acted on its threats.

Since the signing of the Egypt-Israel Peace Treaty in 1979, US military and economic aid to Egypt has amounted to $2.1 billion a year, including $815 million in economic assistance and $1.3 billion in military aid. The US aid to Egypt makes up 57% of Egypt's total grants.

Furthermore, US investments in Egypt exceeded $22 billion in 2019, an increase of around 26% over 2017, Prime Minister Mostafa Madbouly said Nov. 19. Thus, losing US investments would weaken the Egyptian economy.

Commenting on Egypt's ability to withstand US pressure, Mazloum explained that the current regime is well-aware of the need to diversify its weapons sources, fearing US leverage over Egyptian decision-making. In 2013, the US administration froze some military aid to Egypt because of what it described as repression of protesters.

Mazloum stated, “I expect Egypt to continue to work on completing the deal, whatever the cost.”

Egypt criticized the United States in August 2017 for reportedly holding back $152 million in military aid, with the intention to cut $96 million more "over human rights concerns,” Washington said.

Speaking to Al-Monitor, Maj. Gen. Nasr Salem, former head of Egypt's Military Intelligence and Reconnaissance Administration, ruled out the possibility that US pressure would escalate to the point of severing relations with Egypt. He said the United States would be hurting itself if US-Egyptian cooperation were halted in an inflamed region such as the Middle East. This is particularly true since Egypt is an intrinsic supporter of the United States in the fight against terrorism and extremism in the region, he added.

Writer and political analyst Mac Sharkawy told RT (Russia Today) on Nov. 18, “Washington will only impose sanctions on Egypt after long consideration and reflection, given that Cairo has in hand multiple keys that the United States needs, such as the negotiations with Hamas and [other] Palestinian factions. This is not to mention the US interests in the Middle East, which are correlated to Egypt.”

Spokesman for the Justice and Development Organization for Middle East and North Africa Studies Zaidan al-Qanai said Nov. 17 that Washington will not impose sanctions on Egypt, given the US strategic partnership with Cairo. He said the fight against terrorism in Sinai is also a US interest.

Salem said the US pressure targets not only Egypt but Russia as well, given that the Countering America's Adversaries Through Sanctions Act (CAATSA) aims to deter Russian ambitions and downsize its arms sales.

CAATSA, which the Senate passed in July 2017, imposes sanctions on any country that concludes arms deals with the intelligence and defense sectors in Russia, Iran or North Korea.