Egypt moves ahead with purchase of Russian arms despite US warnings

Russian media reported that Egypt has received five Sukhoi Su-35 advanced combat aircraft despite US threats to sanction Cairo over the Russian deal. 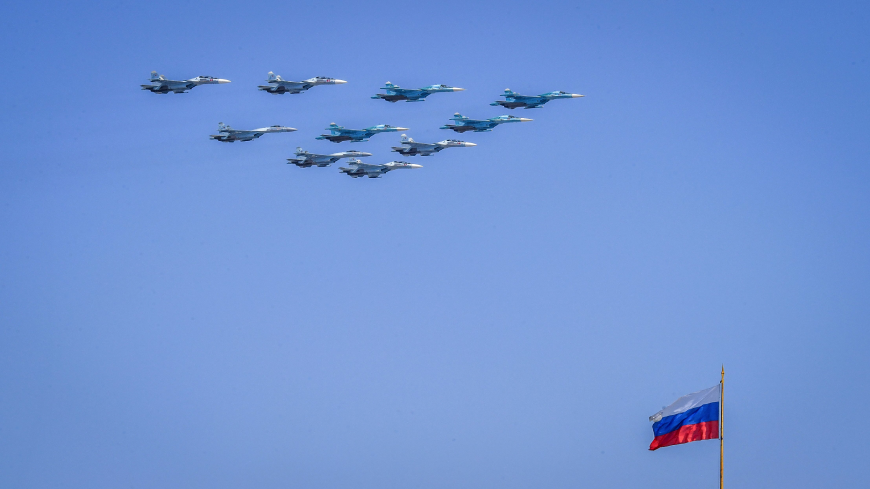 Russian Sukhoi Su-35 and Su-34 military aircraft fly over the Russian national flag on the Kremlin palace in Moscow on May 7, 2019, during a rehearsal for the Victory Day military parade. - YURI KADOBNOV/AFP via Getty Images

CAIRO — Russia officially announced on Feb. 25 that Egypt had received five Sukhoi Su-35 advanced combat aircraft. The Russian Khabarovsk Krai region’s official media agency stated that the most important achievement of the military factory in the region was delivering the five Su-35 fighter jets to Egypt, out of the 24 jets that were agreed upon, despite the COVID-19 pandemic.

On July 23, 2020, the first photos of the new Egyptian upgraded Su-35SE fighter jets were taken by journalist Andrey Neyman when five fighter jets, which represented the first batch of an Egyptian-Russian arms deal, arrived in the Russian city of Novosibirsk for refueling, according to The Drive.

Speaking at the Dubai Airshow on Nov. 18, 2019, R. Clarke Cooper, then-assistant secretary of state for political and military affairs, said the US government, represented by then-Secretary of State Mike Pompeo and then-Secretary of Defense Mark Esper, has sent an official letter to Egypt warning it of possible sanctions if it goes ahead with plans to purchase Russian aircraft.

Cooper said Egypt is aware of the risks it would be taking by purchasing Russian aircraft because this exposes it to possible US sanctions and threatens its future purchases of US equipment, noting Pompeo and Esper stressed that “any major new arms deal with Russia would complicate US defense and security assistance to Egypt.”

Esper and Pompeo had addressed their letter to Egyptian Defense Minister Mohamed Ahmed Zaki. Meanwhile, Washington had warned the commander of the Egyptian air force, Lt. Gen. Mohamed Abbas, of the consequences of the Russian arms deal and asked Cairo to review its military and intelligence relations with Russia.

Maj. Gen. Khaled Okasha, director of the Egyptian Center for Strategic Studies, told Al-Monitor that after Egypt's success in purchasing 24 Rafale aircraft from France in February 2015, Cairo ordered the upgraded Sukhoi 35 fighter jets so that it can diversify its weapons sources, especially for its air force, and not rely on US weapons only.

He said the United States has supplied Israel with the fifth-generation F-35 fighter jets, and thus Washington has guaranteed Tel Aviv’s military supremacy and sovereignty over the region with this type of aircraft. The acquisition of this type of aircraft could threaten the balance of power in the Middle East, especially after the United States refused to sell F-35 fighter jets to Egypt at the same time, he added.

Okasha stressed that the main goal of Egypt in acquiring the Sukhoi 35 aircraft is that this type of aircraft can match the Israeli and US warplanes, and thus the Egyptian army guarantees superiority in regional skies. “This is why the United States strongly opposed this deal and threatened sanctions against Egypt.”

Okasha stressed that Egypt has the full right to diversify its weapons sources without relying on the United States alone, rejecting US threats to suspend military aid because Egypt has a right to make independent decisions. He added that Cairo already received 40 Russian Ka-52 attack helicopters in November 2019, which is what may have angered the United States, since Egypt insists on completing its military deals with Russia without submitting to the dictates and threats of the United States.

On Feb. 23, US Secretary of State Antony Blinken expressed to his Egyptian counterpart, Sameh Shoukry, his concern about Egypt's purchase of the Russian Sukhoi 35 planes. The former Donald Trump administration had previously warned against this deal, saying it would expose Cairo to the risk of US sanctions under the Countering America’s Adversaries Through Sanctions Act. Blinken also expressed concerns about the human rights situation in Egypt, stressing that it will be pivotal in the bilateral relations between the United States and Egypt.

Ammar Ali Hassan, a professor of political science at Cairo University, told Al-Monitor that US-Egyptian relations have gone through many stages and tensions in recent years, to the point that US aid to Egypt was suspended in 2013 when former President Mohammed Morsi was ousted and a crackdown on the Muslim Brotherhood supporters was launched.

He added, “Even after aid resumed [in 2015], relations between the two countries remained unstable. Egypt heavily relied on the United States to secure weapons, but [after aid was cut], Cairo realized the importance of not relying on Washington alone. Besides, the United States refused to supply Egypt with the F-35 planes that it had provided to Israel to ensure its military superiority.”