Russian media outlets reported that a first batch of the Su-35 fighter jets are en route to Egypt as part of a 2018 deal over which Washington threatened Cairo with sanctions. 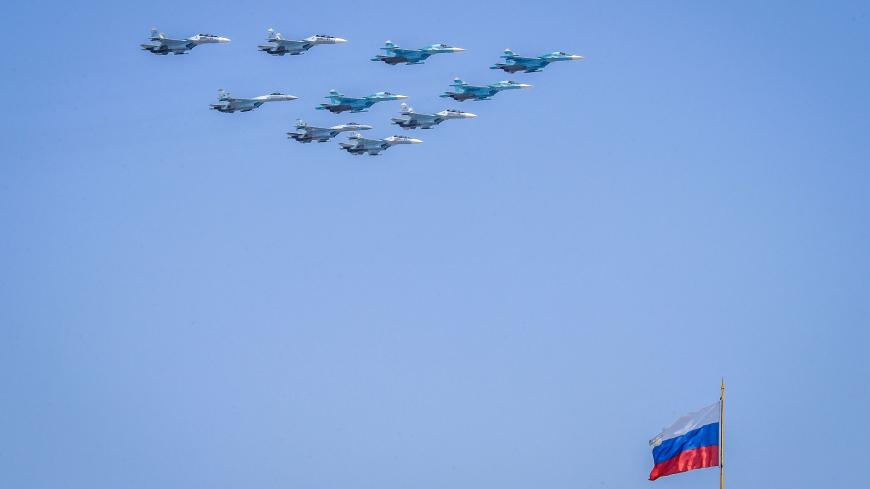 Russian Sukhoi Su-35 and Su-34 military aircrafts fly over the Russian national flag on the Kremlin in Moscow on May 7, 2019, during a rehearsal for the Victory Day military parade. - YURI KADOBNOV/AFP via Getty Images

CAIRO — Russia Today quoted military sources July 27 as saying that the Egyptian army will acquire the Russian Sukhoi Su-35 fighter jet, a first for Egypt, after photos emerged of five of them heading to Egypt. Neither the Russian nor the Egyptian side has so far made any official comments on the alleged acquisition, while the United States objects to any such deals.

According to Russia Today, “The sources indicated that these heavy and long-range fighter jets would give the Egyptian army superiority in the regional sky, which is why the US strongly objected.”

Russia’s Top War website, which focuses on defense affairs, reported July 23 that the first batch of Su-35 fighters took off from the Komsomolsk-on-Amur Aviation Plant and headed to the European side of Russia, from where they will be delivered to Egypt.

The report read, “Photos of the first five Su-35 fighters built for the Egyptian Air Force appeared on the web, which made a stopover at Novosibirsk Tolmachevo Airport during a flight to the European part of Russia. As can be seen from the photographs, there are no identification marks on the planes, but the tail numbers on the keels are marked from 9210 to 9214.”

SIS reported back then that the deal entered into force in late 2018, and the fighter jets will be handed over in 2020-2021. The jets will be added to the Egyptian Air Force's list of Russian-made weapons, including the Mikoyan MiG-29M, Ka-52 Alligator and S-300VM “Antey-2500,” according to SIS.

Maj. Gen. Hamdi Bakhit, a member of the parliamentary Defense and National Security Committee, told Al-Monitor that the Sukhoi fighters are a major addition to the Egyptian Air Force in light of the present threats to the region.

The Russian media reports on the handing over of fighters coincide with regional tensions, with Egyptian President Abdel Fattah al-Sisi announcing June 20 that the Egyptian armed forces' direct military intervention in Libya has acquired legitimacy. In January, the Turkish parliament approved the deployment of troops to Libya in support of the UN-recognized government in Tripoli led by Fayez al-Sarraj.

Bakhit said the Su-35s are highly maneuverable and multi-role fighters that can attack remote ground and air targets, especially heavy concrete targets such as fortifications and runways.

The Sukhoi Su-35 fighters are capable of speeds of 2,800 kilometers (1,700 miles) per hour over an altitude of 11 kilometers (seven miles), with a range of 4,500 kilometers (2,800 miles). Adding external fuel tanks will allow the fighters to travel even greater distance without having to refuel, though their in-flight refueling capabilities make them competitive with US F-35 fighter jets.

According to Top War’s July 23 report, “After receiving the first fighters, Egypt will become the second foreign buyer of the Su-35 after China, which received 24 aircrafts in 2016-2018.”

Maj. Gen. Nasr Salem, the former head of the Egyptian army's reconnaissance department and professor of strategic studies at the Nasser Higher Military Academy, told Al-Monitor by phone that the Egyptian acquisition of the Su-35 fighters, along with MiG-29Ms, Rafale fighters and F-16 Fighting Falcons, will ensure air control so as to protect Egyptian interests.

Washington has objected to the Russian deal. The Wall Street Journal reported Nov. 14, 2019, that Secretary of State Mike Pompeo and Secretary of Defense Mark Esper warned Egyptian Defense Minister Sedki Sobhi of possible sanctions over Cairo’s purchase of Russian warplanes under the US CAATSA provision that bars the purchase of Russian military equipment. It added that such a deal would affect future defense deals between Cairo and Washington.

Salem said that the United States cannot pressure Egypt to cancel the deal as Egypt has sought various sources of armament so that no country would have control over its decisions.

“Why doesn’t the US supply Egypt with the F-35 fighters that it supplied Israel with, since it is objecting to the Russian Su-35 fighters deal?” he asked, adding that Egypt's military seeks to acquire equipment equal to that owned by Israel.

Bakhit said, “Egypt’s national security is above anything else. If that requires that Egypt acquires the Su-35 fighters, then it should, and is free to decide on the matter. The US has given Israel the newest pieces of its arsenal, which are the F-35 fighters. Thus, the US is using double standards with Egypt when threatening sanctions.”