In a new step toward the effective development of the Sinai Peninsula, the Egyptian government announced the launching of agricultural and residential development units for Egyptian citizens from different governorates. 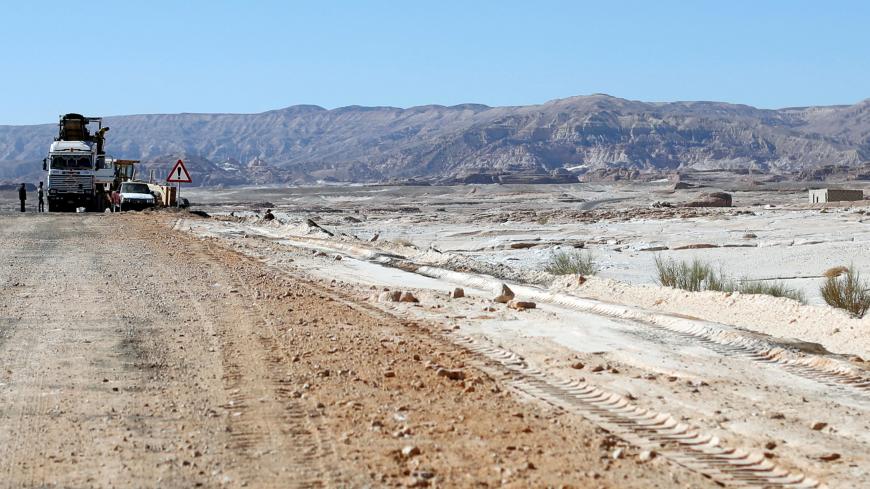 A general view of construction equipment on a new road in the Sinai Peninsula, south of Cairo, Egypt, Dec. 11, 2018. - REUTERS/Amr Abdallah Dalsh

Ten acres of land and residential units of 175 square meters (1,884 square feet) with full facilities will be allocated in a lottery and payment will be made over 30 years at low prices.

This comes in conjunction with US mediation efforts to resolve the Renaissance Dam crisis between Egypt and Ethiopia, which were launched Nov. 5 in a bid to allow Cairo to maintain its share of the Nile water after the activation of the dam in 2020.

According to the Oct. 11 statement of the governor of northern Sinai, Maj. Gen, Abdel Fadil Shousha, the project comes at the directives of the political leadership to establish several agricultural communities in the desert areas, and the settlement of a number of Egyptian families and citizens from across the country’s governorates in Sinai.

There has been a study on the available space in Sinai and the availability of irrigation water, water quality and the soil. Deep wells were drilled for 18 development agglomerations with different scalable areas, and housing units were built to serve the beneficiaries.

The governor noted that the number of housing compounds is 11 in northern Sinai and seven in southern Sinai, equipped with the needed facilities, including agricultural lands, houses, mosques, elementary schools, sports areas, services facilities and production activities and projects.

Regarding the conditions of application, head of the Ras Sedr City Council in Sinai Ali Hamada told Al-Monitor, “The applicants must be at least 21 years old and not older than 50, and have never been allocated agricultural land from the state or other underground wells in the governorate department or other authority. The applicants shall not be employed in the state’s administrative institutions, public authorities or public sector companies.”

He noted, “The total value of housing and land is $24,000, of which 5% is paid in advance upon allocation. After three years, 20% of the value of the land and housing shall be paid and 75% in annual installments for 30 years.”

Hamada added, “Applicants are required to submit a certificate from the Passport, Immigration and Nationality Department, stating that they do not hold any citizenship other than Egyptian, as a basic prerequisite for the acceptance of the application.”

Member of parliament for southern Sinai Gharib Hassan told Al-Monitor, “Such projects provide real job opportunities, solve the problem of overcrowding on the narrow banks of the Nile Valley and increase the agricultural areas, while reducing the import gap for agricultural crops.”

“These projects also open the door for the establishment of industries based on agricultural crops, in addition to providing potential manpower to take advantage of raw materials available in Sinai, such as marble and white sand used in the manufacture of glass and silicon. This is the reason why the government took it upon itself to bear the cost of service facilities, in addition to 40% of the project cost, while citizens would assume 60% of the cost to be reimbursed over 30 years,” he added.

Hassan pointed out that 1,337 families could benefit from the projects, of which 602 in northern Sinai and 585 in southern Sinai, in addition to 150 families of fishermen.

Hassan said that the Ministry of Agriculture and Land Reclamation has set many controls for the project, including adherence to the proposed crop composition in accordance with the water standards set by the Ministry of Water Resources and Irrigation, which will be followed up on strictly to ensure the proper use of water.

He called on the state to complete King Salman University, which will be a new development addition that would attract many families outside Sinai, including the 3 million Sinai citizens.

The head of the Department of Natural Resources at Cairo University's Institute of African Research and Studies, Abbas Sheraki, told Al-Monitor, “Agricultural development projects in Egypt — whether the Sinai Development Project or the Toskha Project, which are part of the reclamation plan of 1.5 million acres — are undoubtedly affected by the Egyptian concerns about the ramifications of the Renaissance Dam on the Egyptians share of the Nile water.”

He expressed hope that the US mediation would succeed in reaching an agreement between Cairo and Addis Ababa that would allow Egypt not to give up on much of its water quota.

According to Sheraki, the Sinai development project through the Salam Canal is an Egyptian national project that has been ongoing for over 21 years, as water was first pumped in the canal back in 1998. “The Sheikh Gaber Canal is one of the channels of the Salam Canal project, which is considered as one of the Egyptian dreams for the development and reconstruction of Sinai.”

Sheraki went on saying that there are several reasons for the Egyptian decision to launch the project at this time, mainly the Egyptian government’s desire to start the development and resettlement and to encourage investment in Sinai, after having almost completely eliminated the terrorist organizations that were once nested in the area, and in response to the demands of the Sinai citizens to support development in the face of terrorism.

“This year the Nile flooding rate was good, which encouraged the Egyptian administration to take its decision to pump water into the project and put lands up for acquisition,” Sheraki said.

“The completion of the project is obviously not contingent on Washington’s negotiations on the Renaissance Dam, as Cairo has recently put in place several measures to deal with its water crises, including the plan to treat wastewater and reconsider the crop structures,” he concluded.