For the first time in Israel's history, the prime minister has called upon his supporters to demonstrate against the country’s law enforcement agencies. 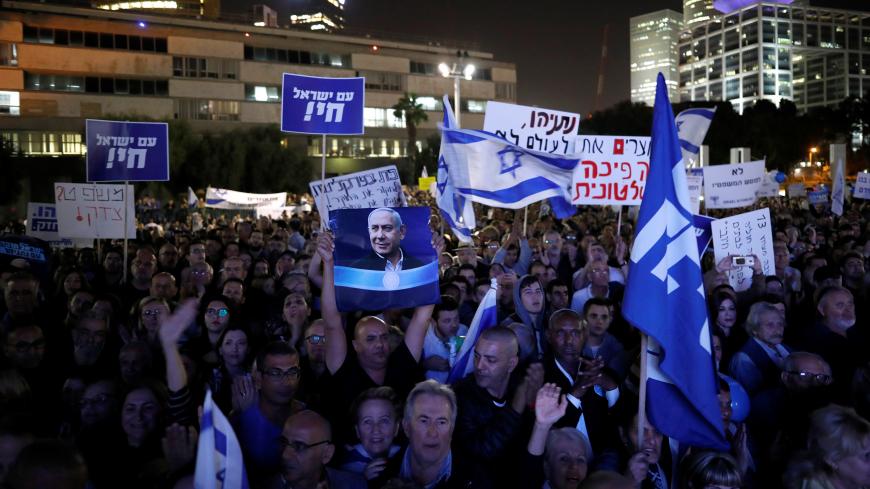 No Israeli government had ever organized a demonstration against the rule of law. No Israeli prime minister had ever urged his supporters to take to the streets and call for the arrests of the state prosecutors and police investigators tasked with handling suspicions of his criminal wrongdoing. But that's what occurred for the first time ever Nov. 26 in front of the Tel Aviv Art Museum. Several thousand ardent fans of Prime Minister Benjamin Netanyahu showed up, rather than the larger masses that the Likud predicted, but their message was loud and clear and the event plainly showed that the prime minister is willing to sacrifice the state and its institutions to avoid prosecution.

On the same day, Attorney General Avichai Mandelblit addressed a conference of jurists in the southern town of Eilat, mounting an attack of unprecedented ferocity. “We are a state body. We act on its behalf and in its name and represent it in legal proceedings. Sadly, the dignified approach we take is not always embraced by others. I am hearing expressions that don’t have a place in public discourse directed at the law enforcement system and certain senior officials in it. I am hearing threats. I am hearing lies. I am hearing baseless slander. That is simply shocking,” Mandelblit said. He praised state prosecutor Shai Nitzan, who has been specifically targeted by Netanyahu and his allies, as a “civil servant in every bone in his body, a top-notch jurist, an honest and decent man.” He offered similar praise for another target of Netanyahu’s attempts to delegitimize law enforcement authorities, prosecutor Liat Ben Ari, whom he called a “true daughter of lions,” referring to her family name which in Hebrew means “Child of a lion.” “She is a true fighter, guided by the rule of law. The fact that Shai and Liat are walking around with bodyguards merely for doing their jobs is totally inconceivable.”

Those who doubted how far Netanyahu is willing to go to defend himself and his freedom have their answer. He fired the opening salvo on Nov. 21 in his nationally televised response to Mandelblit’s announcement that Netanyahu would stand trial on charges of bribery, fraud and breach of trust. Rather than toning down his rhetoric and facing his problems, Netanyahu stormed the state’s law enforcement bastions, demanding the “investigators be investigated.”

His most zealous acolytes followed suit, with Communications Minister David Amsalem stating in a Nov. 23 television interview, “Liat Ben Ari is a woman who should be in jail.” Ben Ari is the lead prosecutor in the Netanyahu investigations and a driving force behind them. Ben Ari was also the lead prosecutor in the investigations and prosecution of former Prime Minister Ehud Olmert that eventually led to his conviction and jail time. That Ben Ari and Nitzan have been assigned bodyguards reflects the madness of Netanyahu's Israel. The pro-Netanyahu demonstrators held up signs spewing hatred and denunciation of the legal system and law enforcement authorities. The crowd booed whenever speakers mentioned the names of senior law enforcement officials, and senior journalists critical of Netanyahu were accorded similar treatment.

Netanyahu seems to have not learned a thing from his troubling past. He led the unprecedented wave of incitement against Prime Minister Yitzhak Rabin in 1995 that eventually led to Rabin’s assassination by a brainwashed, incensed Jew. Although he was warned against it by the Shin Bet, Netanyahu continued his relentless campaign to delegitimize Rabin for signing the Oslo peace accords with the Palestinians.

Law enforcement officials are looking on with despair as Netanyahu veers out of control. “He does not stop at red lights, he does not take prisoners,” a senior law enforcement source told Al-Monitor on condition of anonymity. “He simply wants to burn down the club with all those inside, and that is dangerous. There are people who could give the prime minister’s remarks a broad interpretation and we could find ourselves in terrible places.”

There is no shortage of concerned politicians, not only members of the opposition in the political center-left, but also Likud members. Only three Likud Knesset members showed up at this week’s protest: Culture Minister Miri Regev, Miki Zohar and Shlomo Karai. The other 28 lawmakers stayed away, citing various, sometimes strange excuses. A senior Likud lawmaker told Al-Monitor on condition of anonymity, “Netanyahu would have made it easier for all of us had he truly understood his predicament and vacated his seat so that a new government could be formed quickly and the country spared a third election. Instead, he is forcibly harnessing us all to a mad train car hurtling down a slippery slope toward a dead end. Netanyahu does not stand a chance of forming a new government even after a third round of elections and he has no chance of being granted Knesset immunity from prosecution now that [Yisrael Beitenu leader Avigdor] Liberman has announced he would vote against it. So what is he fighting for? For time? This is our time, this is the future of the state.”

Netanyahu is fighting on numerous fronts at the same time. His Likud nemesis Gideon Saar has openly rebelled, demanding flash primaries to choose a new leader in order to try to form a national unity government with the opposition Blue and White Party in time. His hopes of speedy primaries have been dashed and only two weeks remain before the Knesset is automatically disbanded by law and new elections are called. In any case, even before the next elections, Netanyahu will be forced to run against Saar in the primaries mandated by the party’s regulations.

Netanyahu currently enjoys a solid and enthusiastic core of support among Likud members, but they too understand his situation. “He is no longer a winner, he no longer brings us to power, he was a great asset but has become a no less great burden. This will be a dilemma between automatic loyalty to a leader and the survival instinct to remain in power, and I don’t really know who will win,” another Likud Knesset member told Al-Monitor on condition of anonymity.

If he wins, he will once again have to face the three former military chiefs who now head Blue and White, this time with the baggage of a bribery indictment. Mission impossible? Probably. Nonetheless, the man has specialized in impossible missions and is now guaranteed another six months or so in the prime minister’s office until after the next elections, probably March or April 2020.

Corruption and nepotism
Courts and the law
Israeli elections