Is Iran’s honeymoon in Iraq over?

Protesters in Iraq are directing their wrath toward Iranian influence in their country. 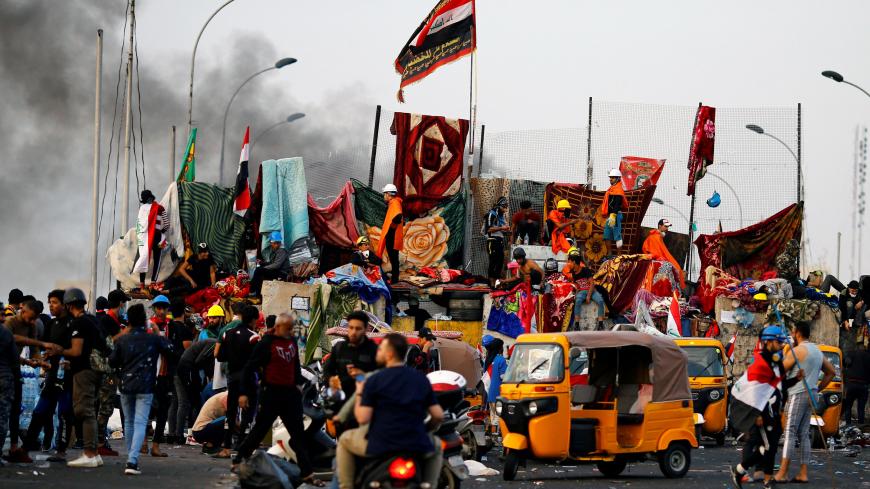 October brought bad news to Iran, as popular demonstrations in Baghdad and Beirut continued, signaling a potential threat to its dominance over the Shiite Crescent.

Anti-Iran sentiments have been a staple of Iraq's protests since Oct. 25. Tens of thousands of Iraqi protesters view Iran as the main source of the country's instability. Protesters wielding Molotov cocktails attacked the Iranian Consulate in Karbala, home to several Shiite shrines, on the evening of Nov. 3.

"After the defeat of [the Islamic State (IS)], all major media outlets focused on broadcasting anti-Iran shows discussing the corruption and widening gap between the rich and poor,” said Mohammed Sameer, 27, a protester from Baghdad. “Extremely poor people blame Iran for backing the corrupt government and its militias, and got sick of Iranian interventions.”

Sameer said that the removal of Lt. Gen. Abdul Wahab al-Saadi, a "hero" in the war against IS, from his post was the "spark for the first protest." He added, “This showed the magnitude of Iran’s influence and urged many people from different sects and orientations to join the protests.”

For the first time, a national consensus has emerged in Iraq rejecting Iranian interference in domestic affairs.

"There is a great rejection of Iran's influence and a marked rise in the patriotic spirit,” Senad al-Fadhel, an assistant lecturer at a university in Najaf, told Al-Monitor. "This collective anger is a cumulative result of Iran's interventions in Iraq, from cutting the rivers and electric supply in the summer to flooding the local markets with their goods, not to mention [Ayatollah Ali Khamenei's] recent speech."

The wrath is everywhere, Fadhel said. “There are protests in Najaf, Karbala, Basra and Maysan,” he said. “Anti-Iran sentiments are evident and cannot be misinterpreted."

Such sentiments are against the Iranian government, not its people, protesters say.

"Now the Shiites are the ones who chant against Iran,” said Taleb, a 25-year old activist from Maysan, who asked to not disclose his full name. “We are not against the people of Iran … we are against the interventions of Iran’s revolutionary party in our affairs. They are responsible for forming armed factions that led to the lack of state and looting of public wealth."

Iraqis have been openly critical of Iran during protests, burning its flag, calling for the country to leave Iraq, defacing posters of Khamenei and attacking the headquarters of Shiite militias supported by the Islamic Revolutionary Guard Corps.

"There is a demonization of Iran in the Iraqi street. This demonization will include the popular mobilization too," said Suha Hassen, an Iraqi doctoral student in counterterrorism at George Mason University. “To get rid of Iran, you have to demonize it and its arms by changing people’s convictions. This is currently happening."

Khamenei exacerbated the situation by calling for suppressing the riots and preserving Iraqi security, further recalling how Iran stifled unrest in 2018. He blamed the United States and its allies for spreading "insecurity and turmoil" in Iraq and Lebanon, urging anti-government protesters to seek change in a lawful way.

"Those demands can be met only through the framework of legal structures," he said Oct. 30. The United States and Saudi Arabia "had similar plans for our dear country, but fortunately the people … came out in time and the armed forces were ready and that plot was neutralized.”

In his Friday sermon Nov. 1, Ayatollah Ali al-Sistani, Iraq's top Shiite cleric, responded to these comments. He stated that he refused the interference of regional and international entities, and the imposition of opinions on demonstrators in Iraq. He said that “no person nor group, no side with a particular view, no regional or international actor may seize the will of the Iraqi people and impose its will on them,” according to Middle East Monitor. Sistani further urged authorities to not "bring any type of fighting forces" against the demonstrators. This sermon put Sistani squarely on the side of the protesters.

Ali Bashar, a political scientist at Bayan University in Erbil, told Al-Monitor, "Anti-Iran slogans were less common at the beginning due to the evolving links of the Sadr movement with Iran — the movement that usually chants the slogan of 'Iran Out!' Recently, they replaced it with “the corrupt go out." However, the people have become aware that Iran and the parties it supports are depleting the Iraqi state's capabilities. Khamenei's tweet provoked the people and led to ready reactions against it.” Khamenei tweeted Oct. 30 that those "who care" about Iraq "remedy the insecurity and turmoil created in their countries" by the United States.

Bashar thinks that Sistani's Friday sermon, as delivered by his representative, satisfied many protesters. “I think Iran is willing to save a government that it helps form and fund many of its militant groups,” he added.

The wrath is everywhere in Iraq. Layth Saher, an English teacher from Nasiriyah in southern Iraq, said, "Most of the ruling parties — the Shiite and most of the Sunni ones — are under Iran's cloak. They are arms of Wilayat al-Faqih." Wilayat al-Faqih is the doctrine in Iran that calls for rule by a supreme leader. Saher continued, "There is a harsh attack on Iran’s supreme leader. He has no right to comment on our legitimate demands for social justice and a new constitution."

Yet Iran is determined to save its strongholds in Iraq. Shiite cleric Muqtada al-Sadr called on Prime Minister Adel Abdul Mahdi to hold early elections to stop the protests. According to Reuters, "Sadr had urged his main political rival, Hadi al-Amiri, whose alliance of Iran-backed militias is the second-biggest political force in parliament, to help push out Abdul Mahdi."

Also according to Reuters, a "secret meeting" Oct. 30 "changed the course of events," with Iran intervening to prevent the ouster of Abdul Mahdi. ​Qasem Soleimani, the head of the Islamic Revolutionary Guard Corps' Quds Force, "intervened" and "asked Amiri and his militia leaders to keep supporting Abdul Mahdi," Reuters reported.

Most of the protesters are between the ages of 15 and 25, revealing a lot about Iraq's new generation.

“It did not come to politicians’ minds that the new generation was born in the technology age and that indoctrination is no longer useful,” Hassen said. “Especially with the existing climate triggering this revolution, such as hunger, humiliation and abuse and finally the mass killing." Hassen was referring to the over 250 protesters killed in the demonstrations so far.

“It is a youth revolution,” she added. “In addition, it is about cutting off Iran's arms in the region.”

For this reason, the Iranian response will be violent, Hassen said. “I expect the fall of a large number of victims over the next two weeks,” she said. "Iran considers Iraq, Syria and Lebanon its territory. It will try all means to suppress these demonstrations. Especially after Iraq’s supreme Shiite leadership came out to oppose Khamenei. This does not please Iran.”

Iraqis continue to call for the overthrow of the regime amid politicians' inability to find solutions to stop the protests, which have left more than 250 dead, according to a parliamentary committee. This November, Iraqi activists launched a campaign to boycott Iranian products on Twitter and Facebook with the hashtag “Leave it to rot.”

"We want all the government out, not just the prime minister,” said Huda Alaa, 30, a physician attending the protests in Baghdad. "We have broken our fear. We are strolling the streets with Iraqi flags unafraid. A few days ago, I didn't even know how to go to [Tahrir Square]. Many things have been changed since then."