The Russian and Turkish presidents met for more than six hours to come up with an agreement on Syria, one that might survive. 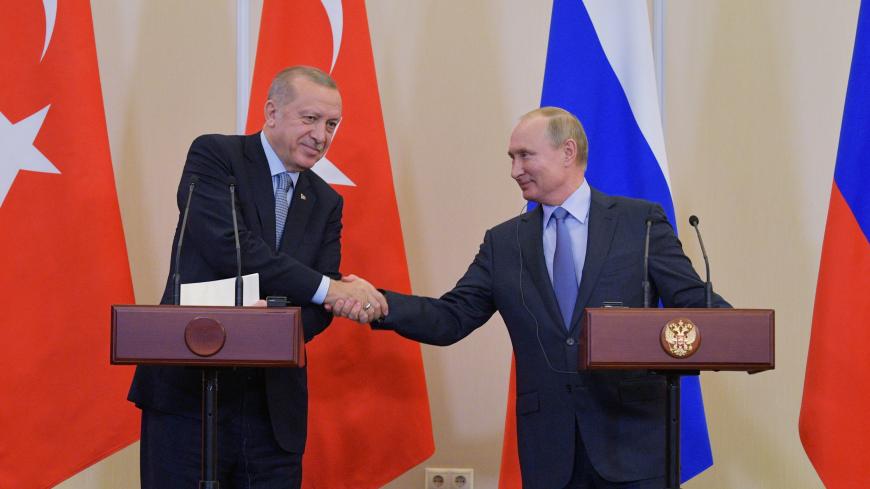 MOSCOW — Russian President Vladimir Putin hosted his Turkish counterpart Recep Tayyip Erdogan at his summer residence of Bocharov Ruchey in the Black Sea resort of Sochi on Oct. 22. This is their eighth meeting this year. Erdogan visited Russia four times this year: working visits on Jan. 23 and April 8; during the Astana trio summit Feb. 14;  and to attend the MARKS air show Aug. 27. Putin visited Turkey only once in 2019. On Sept. 16 Putin took part in another Astana group summit. The two also met at the G-20 summit in Osaka June 29, as well as a meeting in Dushanbe, Tajikstan June 15.

In 2018, the two presidents also had seven meetings. Yet Putin visited Turkey three times, and Erdogan was in Russia once. The other three meetings took place on the margins of the BRICS summit in Johannesburg, at the Astana group meeting in Tehran and on the sidelines of the G-20 in Buenos Aires.

Putin and Erdogan skipped the formalities and, after a brief introductory exchange, got down to what Putin would describe as a “business-like and honest conversation." The two leaders negotiated one-on-one via a single interpreter. On a few occasions they called some members of the delegation into the room for short consultations.

When it comes to Turkey, Russia's trademark policy is to tie any initiative in Syria to a broader bilateral development to enforce its negotiation position. The last time Putin was in Ankara, Russia expedited the S-400 delivery, which was originally scheduled for the spring of 2020. Yet most recently, while focusing on Syria, Putin and Erdogan discussed prospects for increased cooperation in the military-technical area; boosting bilateral trade; and switching to payments in national currencies. Turkey also agreed to embrace Russia's payment system, or Mir — an alternative to credit cards — to boost the flow of Russian tourists to the country.

More than six hours of talks resulted in an agreement that Erdogan hailed as “a new stage” in the Syrian conflict, a stage designed to bring peace. The 10-point joint memorandum covers the sensitive issues that both the Russians and the Turks have channeled to the other since the Turkish incursion.

Specifically, Russia secured Turkey's respect for “Syria’s territorial integrity” and for the “political unity” of the country. Turkey also recognized the Syrian Constitutional Committee as a key mechanism for the political process in the country. The committee is set to be formally launched next week in Geneva.

Erdogan said he briefed Putin “in detail” about the Turkish operation — the Kremlin would also add that about the Turkish-American agreements — and was eloquent enough to convince Putin that Operation Peace Spring doesn’t seek a long-term occupation of Syria. Most importantly for Putin, however, was the basic recognition of the “importance” of the Adana agreement and Russia’s primacy in facilitating the process, as enshrined in point four of the deal. This may not yet be a recognition that the Adana agreement should be the basis for the Syrian-Turkish rapprochement, but it is a vital step toward it, just as Moscow wanted.

Turkey, in turn, secured Russia’s recognition of the operation as a “legitimate security concern” of Ankara's regarding the People's Protection Units (YPG). Moscow didn’t challenge Turkey's gains in the operation, and it also agreed to preserve the status quo created by the operation on the ground. This was meant to be an important sign of respect, both for Turkey’s interests and for Erdogan’s personal investment in the offensive. Russia thus ensured — for the time being — that Turkey doesn’t advance farther into Syria and uses the agreement with Moscow — rather than its long-term military presence — as a guideline to settle the conflict.

Point five reads that, starting Oct. 23, Russian military police and the Syrian border guard will deploy to the Syrian side of the Turkey-Syria border, beyond the Operation Peace Spring zone, to facilitate the withdrawal of YPG forces and heavy armaments, up to 30 kilometers deep into Syria. Then joint Russian-Turkish units will patrol the 10-kilometer area to the west and east of the operation zone, except for Qamishli, which is under the control of the Syrian army. All YPG forces are to withdraw from Manbij and Tell Rifaat.

Those principles, though, are largely in line with the spirit if not the letter of the Adana agreement. Moscow deems this situation favorable, at least for now.

Russia's deployment of the military police has been a trademark of its conflict management solution in Syria. “In any awkward situation, deploy the military police,” one could joke, if it were not such an effective tool for Moscow, be it in dealings between Israel and Iran, Iranian militias, Sunni opposition groups and now with the YPG and the Turks.

The key question here is whether the deal over the withdrawal of the Kurdish forces was pre-negotiated between Russia and Damascus, on the one hand, and the Kurdish forces, on the other. The three have been spending a lot of time lately at the Khmeimim air base, for some reason.

Russia avoided labeling the YPG as terrorists to allow for flexibility in engagement with the Kurdish forces. In this sense, point two is meant to vaguely address the mutual commitment of Russia and Turkey to “fighting terrorism in all of its forms and manifestations” and “confronting separatist intentions on Syrian territory.” The latter is in line with Moscow’s own “territorial integrity for Syria” red line, which Damascus supports. The point allows Ankara and Moscow to interpret accordingly, should a threat emerge.

Similarly, point seven notes the Russian and Turkish commitment to “preventing any infiltration of terrorist elements." This is something each party can interpret through its own political and security lens, although it was likely Turkey's intent to single out Kurdish forces. Remarkably, in its own version of the statement, Russia used the acronym KOS, which, in Russian, stands for “Kurdish Self-Defense Units.”

“We share the concern of the Turkish side over the rise of the threat of terrorism and the increase in ethnic tensions in this area. We believe these contradictions and separatist moods have been fueled from the outside,” Putin remarked, subtly poking the United States.

Interestingly, the parties could have reached a deal on Idlib, but it went unmentioned in the joint statement, though Erdogan mentioned Idlib during the press conference as an agenda item. If such a deal was reached, it can be discerned from Moscow and Ankara's actions in the next few days.

“Thanks to this agreement, we won’t allow for any separatist organizations to emerge on Syrian territories," Erdogan said. "Turkey and Russia will not allow it. Starting tomorrow, we will be implementing our project.”