Hezbollah leader Hassan Nasrallah has told his followers not to join the protests, causing consternation among many of his Shiite followers who have been demonstrating against the Lebanese government. 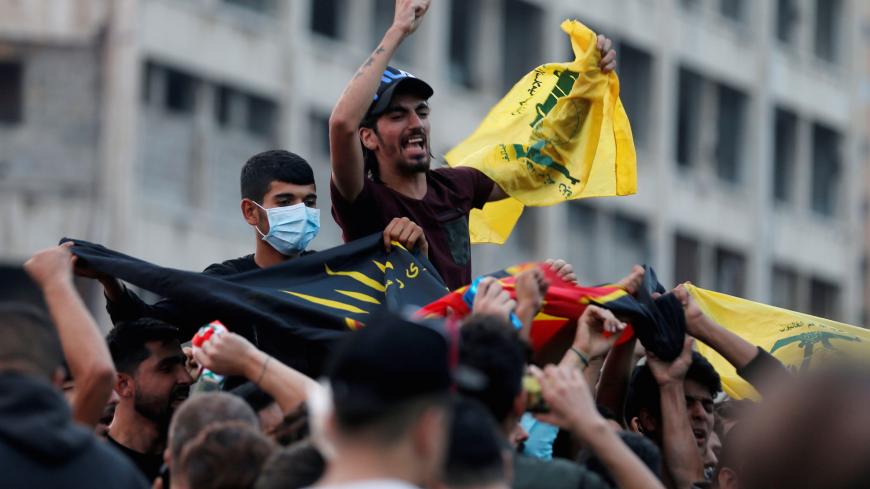 In the middle of Riad Solh square downtown Beirut, a young woman stands watching thousands of her fellow Lebanese calling for the resignation of the government and raises a small placard that reads “I’m financed by the embassy of Hela Hela Hela Ho-stan, who’s financing you?”

"Hela hela hela ho!" is a chant used by the protesters.

The young woman was responding to the speech of Hezbollah Secretary-General Hassan Nasrallah, who accused some groups of protesters of being financed by foreign embassies in a televised speech Oct. 25. “There are groups in the popular movement that are associated with foreign embassies. There are those who are looking for political revenge and settling of accounts. I have the names of all these groups.”

His speech was his second announcement since the beginning of the protests Oct. 17 that he opposes the resignation of the president, the government and the parliament; he asked the protesters to choose their representatives and leadership and set their demands and negotiate. He added, “If you want early parliamentary polls, elect your representatives and agree on an electoral law and we will back you unconditionally.”

“People’s refusal of the reform package that Prime Minister Saad Hariri presented puts the ball in the government’s court,” said Rabih Danadashli, a political analyst from Beirut. Dandashli said Nasrallah’s speech positioned Hezbollah at the government’s very first line of defense. The analyst said, “The speech had a threatening tone in its content and came in parallel with Hezbollah’s supporters’ clash with demonstrators in downtown Beirut.”

Ahmed, who asked that only his first name be used due to the sensitivity of the situation, is a supporter of Hezbollah who began taking part in the demonstrations the first day. But he decided after Nasrallah’s speech to abide by the Hezbollah leader's instructions to refrain from joining the protests. “Leave the squares to those who are convinced of it and we respect all convictions. There is no need to defend the resistance in these squares,” Nasrallah said.

Ahmed told Al-Monitor, “I’m very content to keep away from what’s happening here, I believe he (Nasrallah) has much more information than I have, and I do trust his decisions.” Asked whether he is giving up on his demands, he said, “Hezbollah is our guarantor, since Sayyed Nasrallah said he’s going to make sure things are going to be better, we trust his vows, he has never let us down, and this time it’s much tougher than a war; still, we believe he’s going to deliver on his promise.”

There have been many Shiite supporters of Nasrallah in the demonstrations. Alaa, who also asked that his last name not be used, is from the eastern Lebanese city of Baalbek, where Hezbollah also has a strong popular base. Alaa decided to continue protesting despite Nasrallah’s position, saying that for the first time since he started getting involved in politics he finds himself on the opposite side of his longtime beloved leader and party. Alaa said of Nasrallah, “His priorities here are different from our priorities, we want to change the system, get ourselves a better life; in short we want a new life, while Hezbollah’s priorities are keeping the system and making sure they’re on good terms with their allies. For the first time ever we are having a clear diversion in vision. This is not going to come out with results that please the party and its leader; worst of all, Nasrallah stirred suspicion over the whole movement while he knows very well that it’s not the case for all, but it was as if he was responding to the ‘all of them means of all them’ slogan by hinting from his side the same about the protesters without stating it clearly.”

Prior to Nasrallah’s speech, dozens of Hezbollah supporters went to the main squares of Beirut and started chanting slogans praising him, countering the narrative of “all of them means all of them.” Some encounters took place between Hezbollah supporters and other protesters, prompting the security forces to intervene.

This was the tipping point for many Lebanese who esteemed Nasrallah. The clash of priorities between his popular base and the rest of the Lebanese protesters pushed people to go to the streets in response,

Dandashli said the most provocative part of Nasrallah's speech was when the Hezbollah leader cast suspicions over the protests. “He claimed to have classified information about what he called suspicious support for the protesters; if this was true he should have named names and then people would isolate them and get them out of the protests. It’s a shame to see him insulting people of being paid to go down to the streets to ask for their basic rights.”

Political analyst Hossam Matar told Al-Monitor, “A few people are in charge of the protests; they are managing its agenda. This isn’t a conspiracy necessarily, yet these people are refusing the idea of organizing their ranks and announcing a clear leadership. They are afraid that this might affect their unity and … influence.” Matar said of these leaders: “Someone has a channel, another leads a small party and whoever is strong enough and controls a strong solid party is capable of having a platform; therefore those with rich resources are much more capable of running the whole phenomenon.”

Nasrallah’s position has divided the Shiite community over the protests but also has vowed to follow up on the implementation of Hariri’s reforms. The leader of Hezbollah and his party face a very challenging test: to keep the promise that they are going to confront corruption and make sure all the promises are met. In other words, Hezbollah may have to confront some of its allies and present people with a path for change or ignore the whole notion and lose many of those who have long trusted the group.