Israel is suddenly facing a new reality in which the Iranians are free to attack Saudi infrastructure and the Turks attack Kurds in Syria. 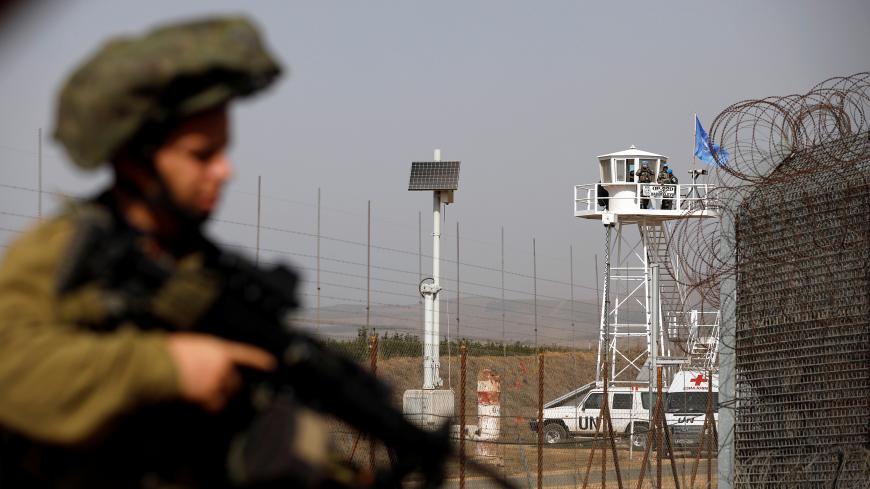 An Israeli soldier stands near the Quneitra crossing in the Golan Heights on the border between Israel and Syria, Oct. 15, 2018. - REUTERS/Amir Cohen

Israeli Prime Minister Benjamin Netanyahu finally found time to react to the Turkish invasion of northern Syria, condemning it in a politically correct tweet Oct. 10. While he warned of the “ethnic cleansing of the Kurds by Turkey and its proxies,” he made no mention of how the United States had abandoned northern Syria, the issue reverberating most loudly across the Middle East and in the corridors of Israel’s worried defense establishment.

It took Netanyahu three long days to release his feeble condemnation of the Turkish attack. They were three very difficult days, as befits the difficult process of waking up about President Donald Trump. The president’s surprising announcement that the United States would immediately withdraw from Syria, followed by the no less sudden Turkish invasion of the Kurdish region, dealt the death blow to Israel’s hopes and expectations regarding its northern front.

“We’ve been left all alone now,” a high-ranking defense official admitted to Al-Monitor on condition of anonymity. “The strategic balance of power is shifting right before our eyes. The bad guys won, and the good guys are abandoning us. Now, Israel is left almost on its own to deal with the powerful Turkish-Russian-Iranian axis.”

On Oct. 6, right before Trump's dramatic announcement and the ensuing Turkish invasion, Netanyahu called an urgent meeting of his security cabinet. For the first time in months, the cabinet gathered to discuss the latest developments in the region, not least the Iranian threat, which became much more tangible after Iran attacked Saudi Arabia’s petroleum infrastructure.

“We know it was the Iranian air force,” a former Israeli senior security official told Al-Monitor on condition of anonymity. “The Americans know it too. Everyone who needs to know does. Yet that doesn’t prevent [Iranian Foreign Minister] Mohammad Javad Zarif from sitting in a TV studio and stating without the slightest hesitation that Iran had nothing to do with the attack.”

Israel is finally waking up, and it is a painful process. It took no time at all for Trump, once deemed a fervent lover of Zion if not the Messiah himself, to be recast as someone who is distancing himself from Israel. It is sadly amusing to listen to the Likud's spokespersons cringe and talk in circles when asked about the sudden American withdrawal from Syria, the abandonment of the Kurds and the president’s desperate efforts to court Iranian President Hassan Rouhani.

“It is true that this policy began under President Barack Obama,” an Israeli military source told Al-Monitor on condition of anonymity, “but we had hoped that we would see an about-face under Trump. It is very disconcerting because the Americans have decided that they no longer want to police the world before the world itself decided that it can manage without a police force.”

The shift in the region is forcing Israel to change its plans, rethink its concepts and prepare for scenarios that were shelved long ago. One of them is the possibility of fighting a war on more than one front in the very near future. This burden is being placed on the shoulders of the chief of staff, Lt. Gen. Aviv Kochavi. On Oct. 10, he met with Finance Minister Moshe Kahlon to discuss the army’s call for a significant increase in its budget so that it can prepare for an “all-out war scenario” with Hezbollah, the Syrian regime, Iran, Gaza (with Islamic Jihad dragging Hamas into the fighting) and maybe even a few others. After three years of being convinced that it was on the winning side, Israel is beginning to realize that it is on the one that's losing or at least has been abandoned. As of now, the IDF (and perhaps the Kurds as well, to a certain extent) are all that stands against Iranian and Hezbollah aggression.

Concern soared in Israel following the September attack on Saudi Arabia’s petroleum infrastructure attributed to Iran and showing a high level of operational capacity. “It’s not as if we didn’t know that Iran has cruise missiles and armed drones,” a former senior military official told Al-Monitor on condition of anonymity. “The problem is that even though we knew it, we suppressed it. So far, Iran’s performance in its clashes with Israel have been feeble at best. They tried to fire rockets at the Golan Heights a few times, but these mostly landed on the Syrian side of the border. It turns out that they are capable of much more, and it is not at all certain that Israel is ready for them.”

Israel believes that if there is an Iranian attack, it will not be launched from Iranian territory. The leadership of Israel’s defense establishment has stressed that if that does happen, Israel will not allow Iran to hide behind its various proxies and avoid taking responsibility. There has been much discussion recently about whether a real Iranian strike on Israeli targets by Iran’s proxies would force Israel to respond against Iranian targets in Iran proper. The answer is yes, and Israel believes that Iran knows it.

There are even those in Israel, who compared the current circumstances to the strategic surprise that Israel faced during the Yom Kippur War, which broke out on this day 46 years ago. Then too, Israeli intelligence knew that the Egyptian infantry was training to use Sagger anti-tank missiles. What they did not know was how advanced Egypt’s missile capacity was. Nor could they imagine how lethal these missiles would be in destroying Israel’s Armored Corps, which had taken its clear advantage for granted.

Israel is the most protected country in the world when it comes to steep dive missiles. The problem with Iran’s cruise missiles is that so far, no system can effectively shoot them down. While Israel does have Patriot missile batteries that can defend against cruise missiles, they don’t seem to be enough. Israel’s advanced military industries have recently been ordered to increase their efforts to find a better solution, but that will take time. Until then, there have been calls in Israel to shut down particularly volatile infrastructure such as the ammonia storage facility in Haifa Bay, fuel reserves and storage sites for other sensitive materials. Uzi Even, a prominent Israeli scientist who played a role in building the nuclear reactor in Dimona, called on the government to consider shutting down the reactor in an Oct. 3 article.

In an interview with Maariv on the eve of Yom Kippur, former Chief of Staff Gabi Ashkenazi recalled how Late Prime Minister “Ariel Sharon constantly reminded us that Israel must not position itself on the front lines in the fight against Iran.” Netanyahu violated this cardinal rule by depicting Iran as the ultimate threat and using it as electoral leverage. It has been 10 years since Netanyahu returned to power in Israel and Iran has yet to be blocked in the nuclear race and dominates the region more than ever and Israel is facing this threat on its own. Netanyahu might very well be soon be out of the picture, unable to fix everything that went wrong in the past decade.