Israel’s dilemma over its ‘war between wars’

Iran's transfer of its activity center from Syria to Lebanon and the American withdrawal from Syria have created for Israel a new, complex strategic challenge. 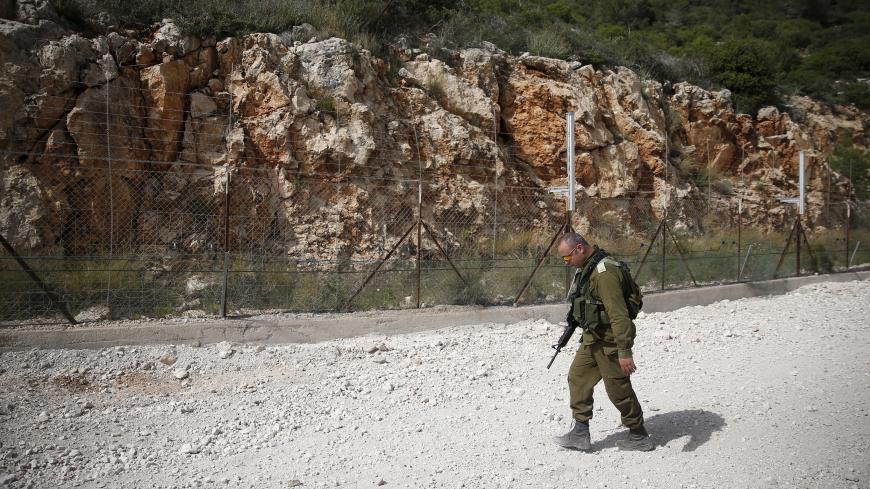 An Israeli soldier walks near the area where the Israeli army is excavating part of a cliff to create an additional barrier along its border with Lebanon, near the community of Shlomi in northern Israel, April 6, 2016. - REUTERS/Ronen Zvulun

Almost three years have passed since the onset of the deployment of what the Israel Defense Forces (IDF) nicknamed “Mabam,” a Hebrew acronym for "the campaign between the wars," or "war between the wars." The goals of the campaign were well defined and precise: to prevent Iran from entrenching itself in the Syrian space and to stop Hezbollah from strengthening itself via Iranian resources. At the top of the list was the “guided precision missile project.” At the beginning, Israel was extremely careful not to refer to this campaign openly. But as time went on, Israeli officials — from the air force commander to the chief of staff to Prime Minister Benjamin Netanyahu — began to brag about the number of assaults attributed to Israel in the Syrian space, and afterward in Iraqi territory as well.

As of this point in time, it seems that this campaign between the wars is dying down; its time has passed. Reports of mysterious assaults against weapons convoys or infrastructure facilities identified with Iran have almost totally disappeared. This doesn’t mean that such an attack is impossible; almost certainly, sporadic attacks of this type will still appear here and there, but the chart does not lie: According to all the signs, the campaign’s era that we have known since 2016 is coming to an end. Unfortunately, there is no chance that peace will reign instead. All the sides need to hope that the campaign between the wars will not be replaced by a full-scale war between Israel and Iran.

“The ‘campaign between the wars’ policy has reached the end of the road,” a former high-ranking Israeli security source told Al-Monitor this week, on condition of anonymity. “There are several cumulative reasons for this: First, the Iranians have moved their activities from Syria to Lebanon. Israel hasn’t attacked Lebanon for more than 13 years now. Second, the messages sent by Russia have become problematic for Israel. Third, Iranian self-confidence has grown due to American passivity and to Trump’s hasty abandonment of the region. Israel understands that this campaign can only descend into war, and it is unclear if there will be someone in Jerusalem who would make such a decision now.”

Yet other high-placed sources disagree with this assessment, especially among the highest echelons of Blue and White. According to political sources, the former chiefs of staff in the party leadership (Benny Gantz, Moshe Ya’alon and Gabi Ashkenazi) are concerned that Netanyahu’s current sorry political state, together with his desperate status on the criminal indictment front, may actually free the prime minister’s inner brake mechanisms. They fear that all his worries accumulated could create a critical mass that will change Netanyahu’s DNA altogether. In other words, instead of someone cautious of adventures, Netanyahu might hope to get off the hook via adventures. “He must not be allowed to pull the rope too far,” one of the Blue and White top officials told Al-Monitor. “The situation is more sensitive and explosive than ever before; the prime minister is more shaken and undermined than ever before. Considering the fact that the prime minister has no real Cabinet [to consult with], we all need to be very worried indeed.”

The military-diplomatic dilemma facing Israel today is significant and real. In 2017, the “precision project” of Hezbollah’s rockets was only theoretical. Israel attacked the Hezbollah infrastructure in Syria and the convoys that transported rockets from Syria to Lebanon; this served to significantly hinder the entire project. One year ago, it was estimated that Hezbollah had only a few precise rockets, a maximum of several dozen. This year, the situation is changing rapidly. Israel does not attack in Lebanon, so Iranian efforts to create precise missiles has moved there. Hezbollah Secretary-General Hassan Nasrallah is on his way to an arsenal of precise rockets that will reach thousands of units. “We are talking about the classic tie-breaker,” a high-level military source told Al-Monitor recently. “If Hezbollah will be able to make precise hits on IDF bases, the air force’s airports, intel centers or power concentrations — that is a different story altogether. Israel absolutely cannot reach such a situation, which brings up memories of the Egyptian anti-aircraft missiles in the 1973 Yom Kippur War.”

On Oct. 28, Prime Minister Netanyahu announced, in a public speech, that Iran recently erected long-range missiles on Yemen’s territory. In that context, a senior defense figured told Al-Monitor that "they are trying to create a 360-degree battlefront. They are succeeding because they now have the ability to attack us from almost all directions."

So much for the bad news. Recently, there have also been positive developments as far as Israel is concerned. Maj. Gen. (res.) Amos Yadlin (former head of Aman military intelligence) told Al-Monitor this week that “the Iranians have their own headaches, in light of the large public protests in Lebanon and Iraq. True, the protests in Lebanon are not actually anti-Iran, but the disturbances in Iraq are directly aimed against [Quds Force commander] Gen. Qasem Soleimani. This is a new mini Arab Spring taking place in two countries through which Iran is trying to outflank Israel,” Yadlin asserted.

In the current state of affairs, Israel is not the only country facing a dilemma. Iran and, mainly, Hassan Nasrallah may find themselves at a crossroads very soon, when crucial decisions will have to be made. Should Israel make the decision to initiate a large-scale strike against the precision project on Lebanese territory, then Nasrallah and Soleimani will have to make an immediate decision: whether to retaliate powerfully and drag the entire region into a conflict that will be much more destructive than all preceding conflicts. Since Nasrallah’s standing in Lebanon is unsteady and since the Lebanese public has had enough of its leaders and rulers, a war may send Lebanon dozens of years back in time and end Nasrallah’s career. “We will not be the only ones to weigh the situation carefully before our next move,” an Israeli security source told Al-Monitor. “Nasrallah is not in such a great position either.”

Meanwhile, the sides are preparing for whatever comes. The IDF is making modifications in its aerial detection, interception and protection systems. The goal is to reinforce its ability to intercept cruise missiles, to pinpoint them in time. Israel is not at its best in this field, because over recent years it directed its efforts to the interception of rockets and high-trajectory missiles. The decisions waiting for the decision-makers in Jerusalem and Beirut in the next months will be truly fateful, critical ones. At this stage, neither of the two countries above have an elected, functioning government, and that is also a problem.

This twilight zone can impose restraint on both sides. But it can also create chaos.