Destroying the precision missile project of Hezbollah and Iran has now become the second-most important priority of Israel after eliminating the Iranian nuclear threat. 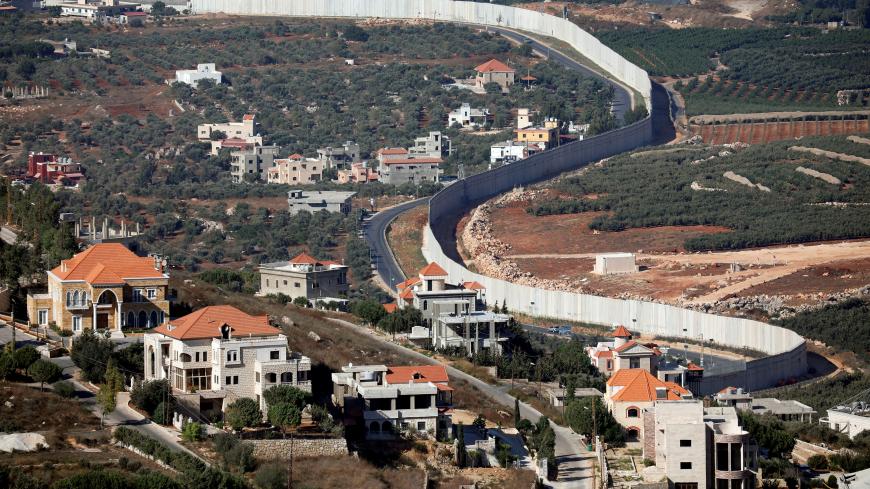 A general view picture shows the Lebanese village of Adaisseh on the left-hand side of the Israel-Lebanon border, as seen from Kibbutz Misgav Am, Israel, Aug. 26, 2019. - REUTERS/Amir Cohen

The blasts of Kornet missiles fired by Hezbollah at Israel finally went silent on Sept. 1. The dust then settled from the many hundreds of artillery missiles Israel fired in response, and Israeli air force jets patrolling the Mediterranean on high alert finally returned to their bases. Nevertheless, psychological warfare continued unabated. Hezbollah Secretary-General Hassan Nasrallah appeared in Al-Manar to announce the start of a “new stage” in his organization’s balance of deterrence against Israel, declaring that there were “no more red lines.” At the same time, he also announced that Hezbollah has no precision missile factories. He was responding to reports that the target destroyed during the “Night of the Gliders” in Beirut a week earlier — when two Israeli drones came down on a Beirut suburb — was a vital component of his precision missile project.

Shortly before he made this statement, Nasrallah was trolled by Israel Defense Forces (IDF) Arabic-language Spokesman Avichai Edrei on social media. “You sure about that? Just watch us,” he challenged Nasrallah in a video clip produced by Israel for the Lebanese public. Before the Hezbollah leader even had a chance to answer, the IDF posted new, detailed documents and photos of a secret factory in Lebanon’s Bekaa Valley allegedly used to produce and upgrade precision rockets and missiles. The factory, which is located near the village of Nabi Shayth, was created with Iranian funding and oversight.

The very name of that village would cause any alumnus of Israeli intelligence to tense up. It is right near the site where Israeli navigator Ron Arad was held after he was captured by Amal forces in 1986. Israel has yet to learn where he disappeared to from there.

It was relatively easy for Israeli intelligence to locate the precision missile factory. It then released the names of Iranian experts working there, as well as a record of their movements between Tehran, Damascus and Lebanon over the last few years. Recently, Israel declassified intelligence materials surrounding these factories, and information that was highly confidential until only recently was released to the public. The goal of “incriminating” Iran and Hezbollah no matter the cost and exposing both the precision rocket project and the Iranian presence in Syria and Lebanon was given precedence over any efforts to protect the confidentiality of sources and techniques used to collect intelligence.

Sunday’s brief round of fighting between Israel and Hezbollah lasted just a few hours. It was enough to allow both sides to declare victory and return home in peace, but it could have ended very differently. If the Hezbollah squad that fired the Kornet missile would have been a skilled one — and if the missile they fired at an Israeli military ambulance traveling along the northern border had veered just a few meters off course — the entire front could have been ignited. It might even have resulted in a third Lebanon war, even though no one really wants that.

Hezbollah fired two missiles at the ambulance after most of the IDF’s stationary targets went silent. The ambulance crew, which included a doctor and four soldiers, violated an order not to move along routes, which were exposed to a potential attack from Lebanon, until the tension along the border was over. The Kornet missiles missed the ambulance by a hair’s breadth. Had they hit the ambulance, Israelis would have woken up the next day to five military funerals and a full-blown war. What helped to bring about a relatively quick cease-fire was an Israeli diversion in which bogus wounded important soldiers were evacuated by helicopter from the site of the missile strike to a hospital in Haifa. Hezbollah was convinced that it succeeded in injuring Israelis and calmed down. By the time they learned that they had been fooled, it was already too late.

A senior military source told Al-Monitor that at the same time, Israeli air force jets flew off the Lebanese coast carrying target missiles and bombs. The jets were under orders to release their loads at targets associated with the precision project of Nasrallah and Iranian Gen. Qasem Soleimani, which are scattered across Lebanon. It is thought that one of the targets was supposed to be the same factory, whose existence Israel exposed 48 hours later. Israel would not have been able to constrain itself had five soldiers really been killed.

In fact, it was this exact same scenario that led to the outbreak of Israel's second war in Lebanon in 2006.

Had Hezbollah hit the soldiers in the ambulance, it is most likely the IDF would have taken advantage of the opportunity to deliver a paralyzing blow to the project, which has been the focus of intense attention by Israeli intelligence for the past few months. Prime Minister Benjamin Netanyahu recently ordered the IDF to move the precision missile project to second place in its list of major threats, right after the Iranian nuclear reactor. “Right now, most of our efforts are going into blocking and even eliminating the project,” a senior Israeli military source told Al-Monitor on the condition of anonymity. “The Iranian presence in Syria has dropped to our No. 3 priority for now. They have suffered some severe blows, and the threat they pose is not as urgent. Nasrallah must be made aware that Israel will do everything it can to keep him from using precision rockets and missiles, and when I say everything, I mean everything,” said that senior source.

In other words, based on its signals, Israel is prepared to launch a third war in Lebanon to block the precision missile project. The project threatens to make Hezbollah capable of paralyzing Israel militarily and economically through the use of tens of thousands of precision missiles. “Nasrallah is well aware of this,” a top Israeli security source told Al-Monitor on condition of anonymity. The source added, “It is not at all certain that war is in his interests right now.”

Once the factory’s existence was revealed, Hezbollah began removing manufacturing lines and important components from the site as quickly as it could. This could be seen in satellite photographs, which were also released to the public. The current assessment in Israel is that Hezbollah will now spread its manufacturing capabilities among various population centers, particularly Beirut, so as to reduce the risk of an Israeli attack. Nevertheless, last week’s attack in Beirut’s Dahiyeh suburb has also been attributed to Israel, indicating that both sides are rapidly losing their red lines. The Israelis are also speaking more openly about it. In briefings to the Israeli media, Netanyahu himself admitted to recent attacks. He then went on to humiliate Nasrallah by claiming that during Sunday’s clashes, the secretary-general himself asked for a cease-fire and appealed to at least three foreign states to act as mediators. Meanwhile, Nasrallah continues to threaten Israel. When — or if — a third Lebanon war breaks out, what happened this Sunday will go down as a significant step toward it by both parties.