How Long Will Israel Stay Off the Nuclear Hook?

The agreement on Syria's chemical weapons, and prospects for a deal on Iran's nuclear program, will bring even more attention to Israel's not signing either the Non-Proliferation Treaty or the Chemical Weapons Convention. 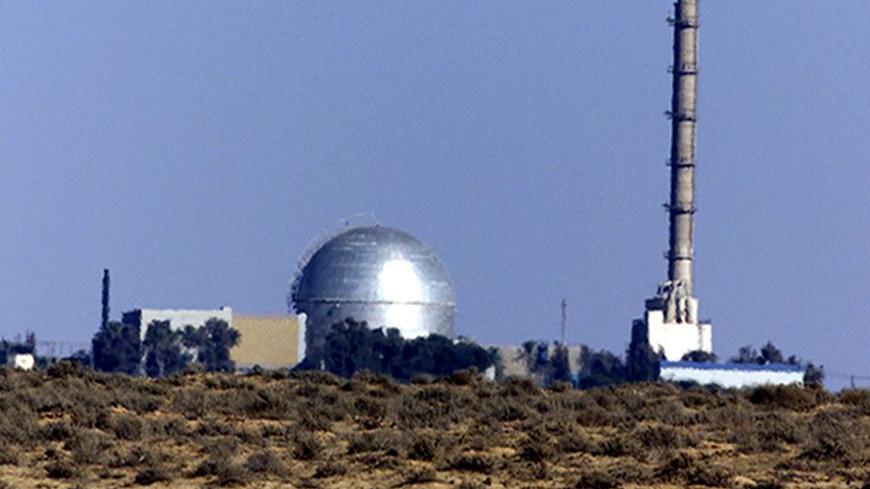 View of the Israeli nuclear facility in the Negev Dest outside Dimona, Aug. 6, 2000. - REUTERS

As he said in his speech at Bar-Ilan University on Sunday, Oct. 6, there’s certainly room to ask the Iranian regime: "If you only want peaceful nuclear energy, why do you insist on centrifuges to enrich uranium and on plutonium reactors?" Indeed, dozens of countries produce nuclear energy for peaceful purposes without these elements, which are essential for the production of bomb-grade fissile material.

In talks held last week with senior European Union diplomats, I found out that Brussels isn’t rushing to buy the smiles of Iran’s new president, Hassan Rouhani. Iranian Foreign Minister Mohammad Javad Zarif, in a closed-door meeting with several senior European officials, stressed that Iran’s immediate concern included deterring Pakistan, which is a nuclear-weapon state, and that Iran has no interest in provoking or attacking Israel. Although Zarif’s talking points emphasized, explicitly, that Iran did not seek a nuclear weapon, Zarif’s concern with Pakistan might itself be a rationale for an Iranian nuclear capability.

Zarif stressed that Iran does not rely on Europe to stand at its side in the next war. It remembers well the West’s support of former Iraqi President Saddam Hussein in the war between Iraq and Iran in the 1980s, during which Saddam used chemical weapons with the knowledge of the United States.

The Iranians are asking, rightly so from their point of view, why the international community picks on Iran while ignoring the Pakistani bomb. According to various research institute estimates from 2011, Pakistan has a hundred operational warheads. The Shaheen-2 rocket produced in Pakistan, with a range of almost 2,500 kilometers (1,550 miles), was supposed to have become operational, in addition to nuclear-capable land-based and airborne cruise missiles.

The regime in Tehran is more stable and no less rational than the one in Islamabad. Osama bin Laden did not find refuge for years in an Iranian village. The danger that radical groups will overthrow the government in Pakistan and take control of the country’s nuclear weapons arsenal is greater than such a thing happening in Iran.

The Iranians are wondering, rightly so from their point of view, where Israel gets off threatening to attack a sovereign state to prevent its acquiring weapons which a complete majority of experts in the world believe Israel itself has had for decades. After publication of the interview conducted by Avner Cohen with Arnan (Sini) Azaryahu, who was an aide to Minister Israel Galili, it’s extraneous to tack on the words "according to foreign sources" when discussing Israel’s capabilities.

In the interview published on the web site of the Woodrow Wilson Center in Washington, Azaryahu, who was the right hand of one of Prime Minister Golda Meir’s closest confidants, said that at the end of a discussion held by the war cabinet on Oct. 7, 1973, Defense Minister Moshe Dayan suggested, "We should also prepare a nuclear option for demonstration." Dayan said that Shalhevet Freir, who was at the time chairman of the Israel Atomic Energy Committee, was waiting outside the room for orders to start preparations. Azaryahu recounted in the interview that Galili said to him right after the meeting that Meir had rejected the idea and decreed, "Forget it."

Meir rebuffed the idea, even though several minutes earlier she heard Dayan warn that Israel was on the verge of "destruction of the Third Temple." In an interview for a TV series about the Yom Kippur War and in the Israeli daily Haaretz, Henry Kissinger, who served as US national security adviser and secretary of state, said that if asked on that day to approve the use of a nuclear bomb, the United States would have rejected the request.

The Yom Kippur War illustrates that the prevailing assumption in Egypt and the whole world that Israel possesses nuclear bombs did not deter the Egyptians and the Syrians from attacking Israel. Israel’s deterrence capability rests on its international standing and the military superiority it has acquired in the area of conventional weapons. (The Global Firepower website ranked the Israel Defense Forces (IDF) in 13th place out of 68 armies in the world, without taking into account nuclear weapons, strategic alliances and clandestine methods. Among the countries of the Middle East, Israel is ranked first, followed by Egypt and Iran.)

The civil war in Syria has eroded the country's military to dust and keeps Hezbollah busy. Egypt’s army is busy operating against radical Islamic groups that threaten Israel, too, and Hamas has lost its power bases in Cairo, Damascus and Tehran.

The only threat bothering Israel today is "conventional" terrorism and international isolation in reaction to its occupation and settlements policy, and the loss of its democratic and Jewish character. These problems cannot be tackled with nuclear weapons.

Israeli Chief of Staff Benny Gantz said on Oct. 8, in a speech at Bar-Ilan University, that the next war will open by "a precision missile attack on the General Staff building at the heart of the IDF headquarters in Tel Aviv, or a cyberattack on a site providing essential services to Israelis. Stoplights would malfunction, banks would shut down. A tunnel packed with explosives that reaches a kindergarten, or with an Arab mob charging on a borderline town." In such a war, as we all know, nuclear weapons are not very valuable.

What strategic advantage does Israel gain therefore from its policy of "nuclear ambiguity"? Furthermore, how long will the international community be willing to overlook the anomaly of Israel’s refusal to sign the treaty for the non-proliferation of nuclear weapons and to cancel its membership in the nuclear club?

"Against this background [regarding the Syrian chemical arsenal], the question is whether Israel can make do with a response of the sort given by the Foreign Ministry," said retired senior ambassador Shimon Stein in an article published on the site of the Institute for National Security Studies. He was referring to the Sept. 11 statement by the Israeli Foreign Ministry spokesperson, according to which "Israel will not ratify the convention as long as other countries in the region, which do not recognize Israel and threaten its destruction, possess chemical weapons."

Stein foresees that the decision to rid Syria of its chemical weapons will set off a process of disarmament from weapons of mass destruction in the region, in which Israel will have to do its part. The attribution of the 2013 Nobel Prize for Peace to the Organization for the Prohibition of Chemical Weapons brings back to the surface Israel's refusal to ratify international treaties concerning weapons of mass destruction.

In this regard he recalls the words of Russian President Vladimir Putin from Sept. 19 that "Israel will eventually have to agree to give up nuclear weapons, like Syria is giving up chemical weapons these days."

On the eve of the 1996 elections, the director of military intelligence said the Iranians were hoping Netanyahu trumps his opponent, then-Labor Party leader Shimon Peres, and wins. Indeed, no Israeli leader has done more than Netanyahu for the loss of Israel’s nuclear superiority, according to foreign sources, in the Middle East. Who knows, maybe he will go down in history as the leader who moved the world closer to disarmament from weapons of mass destruction.