The meeting of US secretary of State Mike Pompeo with Prime Minister Benjamin Netanyahu did not reassure Jerusalem over developments in Syria and Iran. 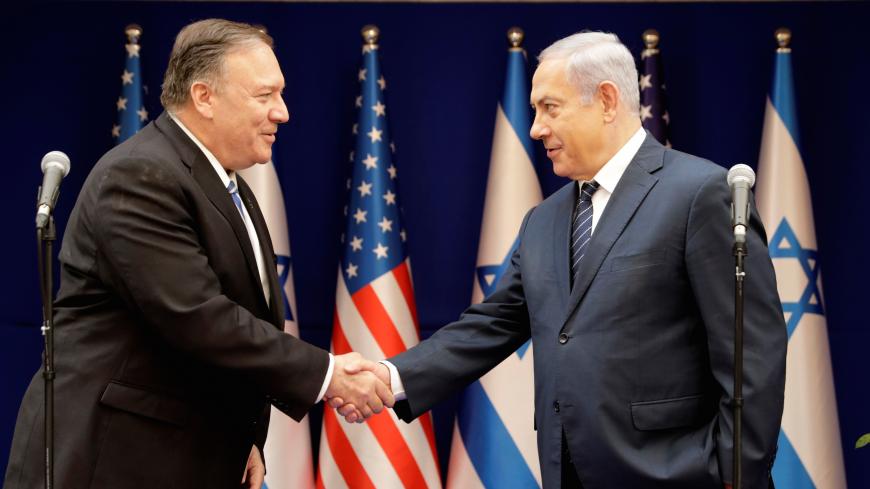 Such a climate of gloom in Jerusalem ahead of a visit by a senior US official is unheard of. Secretary of State Mike Pompeo, the right-hand man of Prime Minister Benjamin Netanyahu’s best friend President Donald Trump, announced his intention to arrive in Israel for a lightning stopover in the morning hours of Oct. 18, right after his dramatic visit to Turkey. Pompeo was supposed to try to publicly assuage Israeli phobias that have soared since it turned out that Trump was speedily pulling out of Syria and leaving the arena to Turkey, Russia and Iran.

“It is clear that he will sit with Netanyahu and explain what a tremendous achievement Trump has scored with the Turks on the cease-fire,” a senior Israeli diplomatic source told Al-Monitor on condition of anonymity on the eve of the planned meeting. “The problem is that no one in the room will believe him.”

Jerusalem is in the depths of a painful hangover that will last a long time. The greater the expectations, the tougher the disappointment. Sobering up from the Trump euphoria that has gripped Israel for almost three years is particularly painful, given that at stake is not only a prime strategic asset but also a political asset Netanyahu rode all the way to the ballot box. The collapse of Trump’s Middle East policy and Israel feeling abandoned and left alone to face the entrenching Shiite axis and the troubling Ankara-Moscow-Tehran connection are generating severe headaches across Israel’s chaotic political board. For the first time in ages, the heads of Israel’s security and intelligence agencies are finding themselves bothered more by developments in the top US echelons than by what is happening between Quds Force commander Qasem Soleimani, Hezbollah leader Hassan Nasrallah, Turkish President Recep Tayyip Erdogan and Russian President Vladimir Putin.

Netanyahu is closely monitoring Trump’s speedy collapse, including the advanced impeachment proceedings and the dizzying reports about events in the White House, with grave concern. The prime minister has yet to admit that his gamble on Trump has failed. If he had to do it over again, Netanyahu would have probably placed the exact same bet. He did not have any real alternative. By the same token, there is no chance that Netanyahu will ever admit that the conciliatory, weak policy of President Barack Obama could have been more effective in blocking Iran’s nuclear program than Trump’s boastful bluster. At the end of the day, Trump helped Netanyahu shore up his position as the ultimate Israeli “Mr. Security” and “Mr. Foreign Policy.”

Trump’s collapse is taking place in tandem with Netanyahu’s. The similarity in the two men’s fate is chilling, except for the fact that unlike Netanyahu, Trump did not fail in two consecutive elections.

Israeli intelligence does not conduct surveillance or espionage of any kind in the United States since the Pollard [espionage] affair in the 1980s. That order is sweeping and aggressively enforced. Nonetheless, there is an attempt to understand events in the top echelons of the US administration and a concerted effort to understand what goes on in the head of the commander-in-chief. Now senior Israeli intelligence officials are at a loss. They were successful in predicting Iran’s moves over the past two years and they displayed expertise regarding Israel’s other neighbors, but they do not understand anything to do with Trump and his administration. Nonetheless, Israeli intelligence did warn in the past that Trump may get tired of the Iranian story and roll back his policies at crunch time. This scenario is being played out now in front of their eyes.

Netanyahu is now trying to squeeze as many drops as possible from the already wrung out lemon of the Trump administration. The greatest concern he raised with Pompeo was — what else? — the Iranian issue. Netanyahu tried to wring from Pompeo US commitments to maintain sanctions on Iran even if it enters into negotiations with Tehran and tried to hand Pompeo suggested guidelines for an alternative nuclear agreement with Iran if the sides end up engaging in talks on the issue. He also raised concern over Iran’s growing daring in carrying out terror and other attacks against US allies in the region.

In other words, Netanyahu presented Pompeo with the cruel reality Israel has been facing in recent months: The fact that it has remained alone in the campaign against Iran, greatly enhancing the prospects that the Iranians will try to strike it the same way they apparently struck Saudi Arabia.

Discussions of a defense treaty between Israel and the United States did not pan out prior to the Israeli September elections. Most senior security officials are opposed to a classical style defense treaty. Nonetheless, in order to boost his self-confidence and the basic (albeit crumbling) assumption that the Netanyahu-Trump friendship is a strategic defense pillar for Israel, Netanyahu tried to wrest through Pompeo an unambiguous presidential declaration regarding the US commitment to Israel’s security, as well as a severe warning that will be conveyed to Tehran.

The relationship between the two countries is as "strong as it has ever been," declared Pompeo after his meeting with Netanyahu. He added that they discussed the global challenges and those faced by Israel and the United States. ‘’We shared our ideas about how we can ensure Middle East stability together,’’ he said.

“Pompeo may be positive and promise to deliver these goods,” a senior Israeli diplomatic source who spoke on condition of anonymity conceded before the meeting. “The question is what such a commitment is worth. Given the current state of affairs, Netanyahu is Trump’s last concern as he grapples with far more burning questions of survival in Washington. Israel’s troubles are of less interest,” the source told Al-Monitor, “as is Benjamin Netanyahu’s personal fate.”