The combination of the American withdrawal from Syria and the political stalemate in Israel leaves the entire burden of Israel’s security on the shoulders of IDF Chief of Staff Aviv Kochavi. 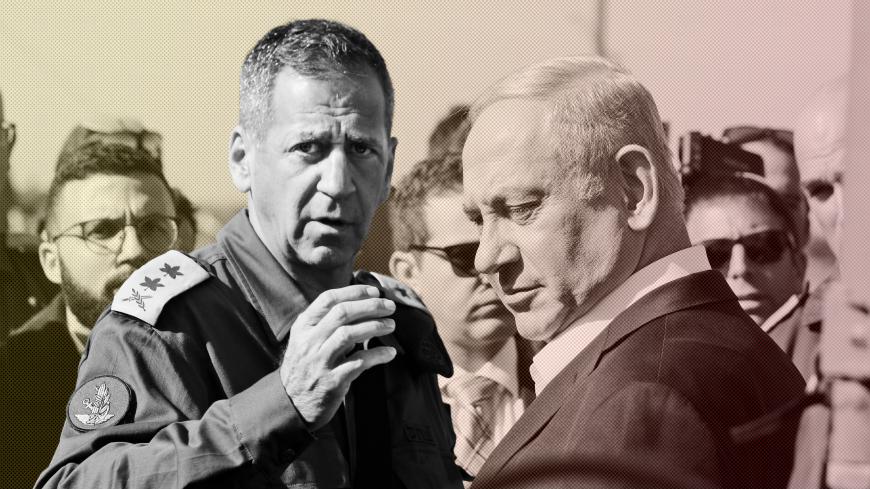 The chief of staff of the Israel Defense Forces, Lt. Gen. Aviv Kochavi, broke a long silence on Oct. 24 to warn against a possible deterioration into war on several fronts. “The situation is tense and fragile,” Kochavi told military affairs correspondents. “We are dealing with a large number of enemies.” Kochavi added that the silence along Israel’s borders was illusory and that a sudden conflagration could spread to the entire front.

Up until recent months, the IDF had assessed that the various fronts were not connected or dependent on each other, and that a clash with Hamas and Islamic Jihad in Gaza would not necessarily affect the northern front or vice versa. This assessment is shifting. The IDF must now quickly prepare for the possibility that the next confrontation on the northern front will almost immediately ignite the southern front and could potentially spark confrontations on additional ones — not just with Hezbollah, but also with Syria and Iran. Other potential threats could even emerge from the southern branch of the Islamic State in the Sinai Peninsula or from a maritime terror attack on Israel’s Western sea front. Add in that Iran is growingly daring and the IDF assumes that the next attack on Syrian territory will trigger an immediate Iranian military retaliation, and it is clear why warning bells were ringing this week at the IDF headquarters in Tel Aviv.

Nevertheless, one must not forget that Israel has been facing a large number of enemies since the day it was established. The country’s security has always been fragile and its borders tense. Why, then, did Kochavi raise the level of anxiety and send the message he issued this week? Anyone who has spent time with Kochavi since he took office in January knows that he is particularly tense and alert these days. The main reason is his understanding that he is on his own. He has no complaints against the political echelon but he knows the facts of life. Prime Minister Benjamin Netanyahu is in the fight of his life and all his energies are invested in a desperate struggle against a political and a criminal ticking clock.

The rest of the political arena is also in limbo. The generals leading the opposition Blue and White Party are irrelevant for now, busy as they are trying to bring down the Netanyahu bastion. Although the 19th IDF chief of staff, Lt. Gen. (res.) Gabi Ashkenazi, has been named chair of the Knesset’s Foreign Affairs and Defense Committee, his authority relates to oversight and is not executive in nature. The government’s security cabinet is paralyzed, and even when it is convened for a rare meeting, it consists of a bizarre collection of young, junior ministers who lack experience in defense matters and whose strategic understanding is limited.

Naturally, Kochavi has begun to realize that he bears the entire burden on his shoulders. At the same time, he emphasizes at every opportunity that the operational decisions and all the attacks recently carried out by or attributed to the IDF were made in a professional manner and not under any political pressure. His remarks are designed to signal that Israel is unlikely to slide into war for political reasons. Nonetheless, there are sufficient other ways for this to happen.

Behind the scenes and under the radar, literally speaking, lies an amazing insight. The main reason for the Israeli alarmism and the sudden acceleration of the IDF’s plans and war readiness does not stem from its various enemies or tense fronts. Its source is quite different: the American abandonment of the region.

Israel has long been familiar with Iran’s capabilities, including cruise missiles and armed drones. Officials in Jerusalem have also held exhaustive discussions about the declining governance of Hamas in Gaza, Islamic Jihad’s ongoing provocation and Hezbollah’s ability to send all Israelis running for shelter. The main change that has occurred in front of Israel’s very eyes is the hasty US retreat and its immediate impact on the remaining players in the region.

Israeli intelligence and defense officials feared such a frightening scenario from the minute President Donald Trump entered the White House. They did not cheer when he withdrew the United States from the Iran nuclear agreement. Over the past three years, many Israeli officials have worried that the capricious president who views the Middle East as a piece of unnecessary real estate could lose interest overnight in developments there. Current events have borne out in amazing adherence to the grimmest scenarios. First the United States did not react to the June 2019 downing of its drone over the Persian Gulf, and then there was no retaliation for the September bombing of Saudi oil facilities. Then came this month’s decision for an immediate pullout from Syria and abandonment of the Kurds.

Netanyahu’s desperate attempt to delay the US withdrawal, as expressed in his Oct. 18 Jerusalem meeting with Secretary of State Mike Pompeo, failed to yield tangible results. Russian President Vladimir Putin was quick to step into the vacuum. Turkish President Recep Tayyip Erdogan is enjoying the fruits of the move and Iranian Revolutionary Guard Corps commander Qasem Soleimani and Hezbollah leader Hassan Nasrallah are rubbing their hands in glee.

Israel is coming to realize that it's facing a large number of players on its own. Its assumptions regarding the "war-between-the-wars" period have shifted. It is now almost certain that Iran will retaliate the next time Israel attacks any of its infrastructure in the region. The reaction, according to the Israeli assessment, will not be so anemic as the imprecise rockets fired at the Golan Heights in January and could more closely resemble the Iranian attack on Saudi Arabia.

It could happen while Israel does not have a functioning government or a proper security cabinet, the IDF lacks a well-organized multi-year plan, a state budget has not been approved and the system is somewhat crippled. When the chief of staff gave a briefing for reporters that made headlines and set off alarm bells, Kochavi was merely telling it like it is.