The recent transfer of a widely popular commander is thought to be an Iranian-backed effort to discredit Iraq's Counterterrorism Service, which is seeking to maintain its independence and military capability. 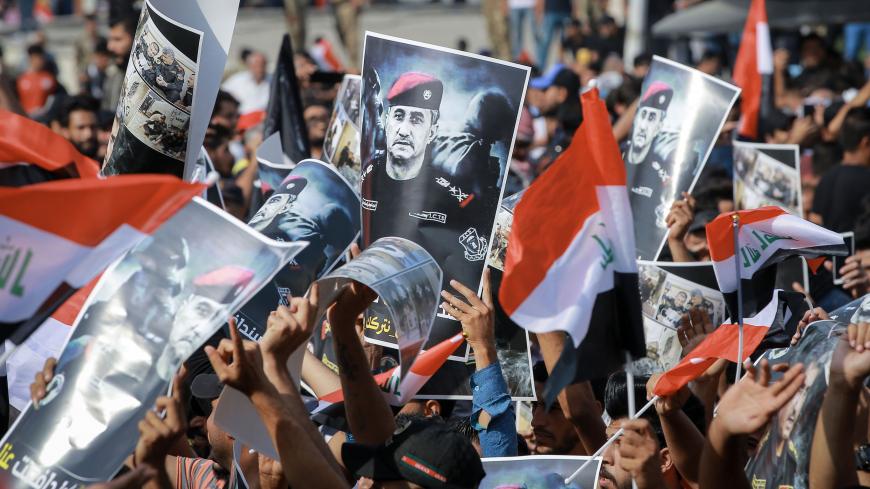 The death toll continued to rise Friday as Iraqi security forces fired on demonstrators protesting everything from government corruption, to a lack of public services, to unemployment. But another subject motivated many of the marchers: the removal of a beloved war hero from his post and the belief that Iran was behind it.

Many protesters in Baghdad and other Iraqi southern cities are carrying posters of Abdul Wahab al-Saadi, who was unceremoniously yanked from his position as second in command of the Counterterrorism Service in late September and reassigned to a job shuffling paperwork.

Protesters see him as a national hero who won the battle against the Islamic State (IS) and now, instead of rewarding him, Prime Minister Adel Abdul Mahdi is punishing him.

Saadi, who was second-in-command at the Counterterrorism Service, was transferred Sept. 27 to the Iraqi Ministry of Defense. This is where military personnel sometimes are sent as punishment, where they abstain from carrying out any duties and stick to mundane office work.

In what apparently was intended as an explanation, Abdul Mahdi on Sept. 29 alleged that Saadi made "frequent visits to foreign embassies, and this is not allowed."

Several bloggers scoffed at Abdul Mahdi's remarks on social media and said the accusations were similar to those leveled at journalists and civil society activists for “working for foreign embassies,” namely the American and British.

Asked about the reason behind the transfer, Saadi said in a press statement published Sept. 27, “Talib Shaghati, head of the Counterterrorism Service, called on Abdul Mahdi to make the transfer following the meeting of the National Security Council held a few days ago.”

Saadi, 56, added, “There seems to be a secret agreement to change commanders, but this approach is not commensurate with the sacrifices made by the armed forces in the war against the Islamic State. I did not want to execute the government order to join one of the departments of the Ministry of Defense. I prefer retirement, despite the fact that I have yet to attain the legal age of retirement."

While Saadi's statement indicates conflict within the counterterrorism unit between him and Shaghati, this doesn’t seem to be reason enough to end to his military field presence. There are other factors behind this transfer, related to his widespread popularity that exceeds that of all leaders ot the military and the Iran-backed Popular Mobilization Units (PMU).

Rahman al-Jabbouri, a senior researcher at the Center for Regional Studies at the American University of Iraq Sulaimani, said, “In a country ruled by politics and political consensus, there isn’t a single decision that does not stem from a political background. A part of Saadi’s issue stems from the politics of axes in the country. He … made the mistake of relying on the political support he had.”

Jabbouri added, “There are those who want to portray the Counterterrorism Service as an institution witnessing internal disputes, as this would allow others to attack the service, being a force close to the state and the US axis."

The Counterterrorism Service is not affiliated with the Ministry of Defense and has its own law. The service was founded and supported by US forces. Its leaders and fighters have been trained by Americans. In the recent battles against IS, the decisions of the service were never linked to those of other sectors, and service leaders were the only ones briefed on its plans.

The United States regards the Counterterrorism Service as an “independent force” close to it, but Iran seems to be working to infiltrate this force, an Iraqi official told Agence France-Presse on condition of anonymity. Leaders of some Iran-supporting PMU factions have lobbied for Saadi's dismissal.

"The main point was to dismiss Saadi and replace him with someone close to Iran so that the counterterrorism forces would stop standing in the way of those factions," the official said.

These statements converge with what a close associate of Saadi told Al-Monitor.

“The issue of transferring Saadi did not come from within Iraq. There has been pressure exerted by Iran and its loyalists, as Saadi deprived them of their military stature after he gained wide popularity,” he said.

People then took to the streets in support of Saadi in Mosul, and a huge number of social media users expressed their rejection of the decision online. Also, most political blocs have announced that they oppose the decision.

On Sept. 27, former Iraqi Prime Minister Haider al-Abadi took to Twitter to say, “This isn’t how a state should reward its fighters who defended the homeland. There are certainly contexts that lead to changing or rotating military and security positions, but such action must be carried out based on professional grounds without overlooking those who offered a lot to the people and to the homeland in the darkest of times. Are positions being sold even within the military and security establishment?”

“Iran is trying to weaken the military establishment in Iraq, all the while replicating the experience of the Islamic Revolutionary Guard Corps in Iraq through the marginalization and exclusion of professional military commanders. People close to Iran are behind the decision to transfer Saadi," Qassab said in a TV interview.