A new report shows significant progress in Egypt, but demonstrations are placing new pressures on President Abdel Fattah al-Sisi to do more to battle corruption. 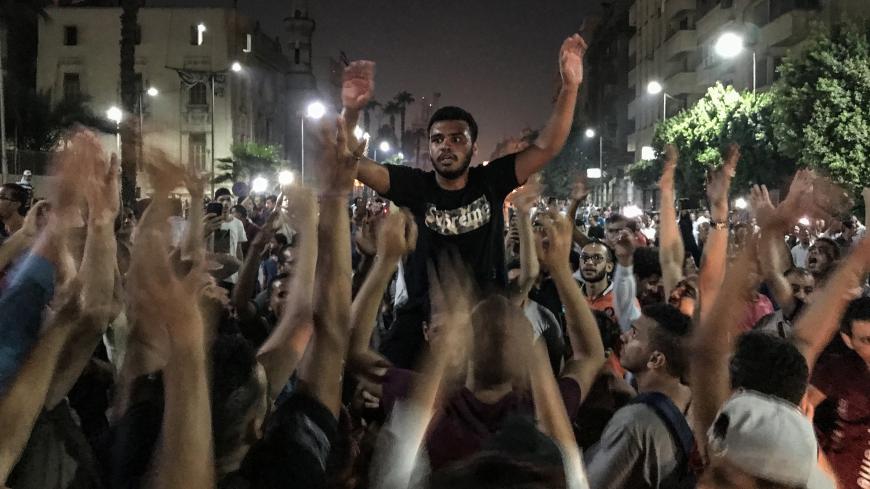 While the Turkish invasion of Syria and the protests in Iraq have the attention of the world, a crisis in Egypt is quietly smoldering — a reminder never to take your eyes off Egypt, even when things appear quiet, or at least relatively so, compared to other regional hotspots.

And while not causally linked, the Egyptian case shows some similarities with Iraq, including the daunting challenges of youth unemployment and the need for more dramatic steps to combat corruption, which is becoming the mantra for change in the region.

The latest IMF report on Egypt, released just this week, praised Sisi’s “ambitious home-grown reform program” that has “been successful in achieving macroeconomic stabilization, a recovery in growth and employment, and putting public debt on a clearly declining trajectory.”

Tourism and remittance revenues, which are subject to shifts in the security environment and fluctuations in oil prices and the regional economy, remain strong.

So with all the good news, why the "social unrest" of the last month? The IMF report also provides some answers and potential insights.

First are the daunting demographic trend lines. Egypt has a population of about 100 million, growing at a rate of approximately 2%. More than half are under 24, and more than a third are under 14. The IMF estimates that Egypt needs to generate 3.5 million new jobs over the next five years — 700,000 annually — primarily from the private sector.

Second, a private sector that can generate the required sustained growth and jobs depends on reducing corruption and shoring up legal systems — where Egypt has more work to do. The report adds that the “transition to a transparent market-based economy will require further broadening and deepening of reforms … particularly regarding long-standing problems of weak governance, rent seeking, vulnerabilities to corruption, and the heavy presence of the state in the economy.”

A third challenge is that the reduction in energy subsidies, which are linked to government bloat, inefficiency and corruption, come at a cost, as citizens face rising fuel prices. Sisi has reduced these subsidies over the last four years from 4.1% to 1.2% of GDP, with a projected decline to 0.4% by next year.

'A rare show of defiance'

Although the government crackdown caused many of Egypt’s secular parties to restrain their public protests for now, as we report here, the current lull may indeed just be a pause.

An Al-Monitor correspondent in Egypt reports that the unrest “signals the breaking of the formidable fear barrier that Sisi has vigorously and persistently tried to reinstate since coming to power as president in mid-2014. … The suppressive measures had appeared to have succeeded in terrorizing Egyptians until the recent eruption of anti-government protests, a rare show of defiance that has prompted a series of concessions from the government in recent days.”

The street has its DJ and soundtrack

And a crackdown on the internet, as we report here, is not preventing workarounds among the youth, who continue to turn to Facebook and YouTube postings of disgruntled ex-pat contractor and former actor Mohamed Ali, whom The Economist calls Sisi’s "pain in Spain."

Ali seems an unlikely champion of reform. His core gripe is that the Egyptian government has stiffed him on payment for his work on big government contracts. He is no Mohamed Bouazizi, the modest Tunisian street vendor who set himself on fire in response to government harassment and humiliation in December 2010, ringing in the Arab Spring.

Nor is he comparable to Abdul Wahab al-Saadi, a hero of the battle against the Islamic State and of Iraqi protesters, “who was unceremoniously yanked from his position as second in command of the Counterterrorism Service in late September and reassigned to a job shuffling paperwork,” allegedly, according to demonstrators, at Iran’s behest, as Mustafa Saadoun reports from Iraq.

What Ali has done is give the protesters their soundtracks and anthems, as Hossam Rabie reports, noting that a wave of new songs “tackle issues that are important to youths: drugs and peer relationships, quarrels, the use of force and politics. They also use youthful jargon, with slang and swear words thrown in, which is not common in other genres. Given their content and language, the songs are popular at underground festivals and political rallies.” And the Egyptian government is also battling back, enlisting its own singers and musicians, to mixed results.

'We have issues to work on'

“Egypt is a country going through a long-term transition itself, and we have issues to work on — both economic and social issues — some of which are a result of the past,” Egyptian Foreign Minister Sameh Shoukry told us last month. “So we are, I think, committed to rectifying any deficiencies, and I don't think any country can say that they have achieved full objectives in all of these areas. … But I think you should always look at the overall picture of what the situation is in Egypt and to what extent it corresponds to and as a matter of satisfaction of the overwhelming majority of Egyptians.”

The IMF report, and the recent demonstrations, signal that economic reforms may not be enough, absent a sustained commitment to reform and anti-corruption. The demographic demands of a growing population needing jobs, and a new mantra of anti-corruption, are not just unique to Egypt — we need only look at Iraq, as we addressed here last week.

We wrote back in August that Egypt matters now more than ever, and the “US-Egyptian partnership is vital to a shared regional agenda, and human rights, like regional security, needs to be addressed as central to that partnership.” Egypt’s progress on economic reform needs a political complement, and Washington can and should support Cairo on that path — while counseling restraint in the use of force against those struggling through the "long-term transition."