Turkish drones in Libya are a strategic and family affair

Drones manufactured by the company of the Turkish president’s son-in-law been prominently involved in what has become a proxy war between Turkey and the UAE in Libya. 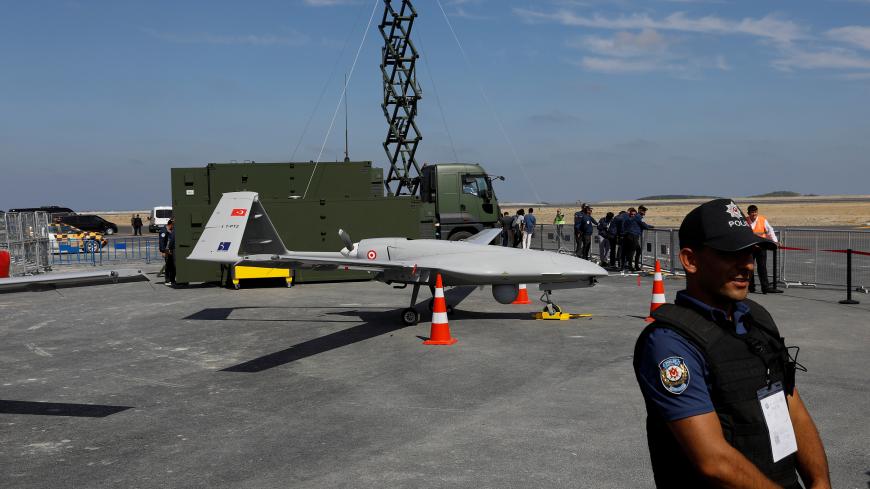 A police officer stands next to an unmanned aerial vehicle during Teknofest airshow at the city's new airport under construction in Istanbul, Turkey, Sept. 22, 2018. - REUTERS/Umit Bektas

A war of drones involving Turkey has escalated in Libya in recent weeks, as Khalifa Hifter’s Libyan National Army, backed by Egypt and the United Arab Emirates (UAE), continues to target Tripoli. While the appearance of Turkish drones in the war theater is an unequivocal sign of Ankara’s support for the Tripoli and Misrata forces, the drone tussle between Turkey and the UAE has an aspect less spoken about, namely a link to President Recep Tayyip Erdogan’s family.

The Bayraktar TB2 drones that have shown up in Libyan skies are manufactured by the Baykar company, a family business of Erdogan’s son-in-law Selcuk Bayraktar, who is married to the younger of the president’s two daughters. Hifter’s forces have already shot down several Turkish-supplied drones, and the Tripoli-based Government of National Accord is said to have ordered more drones from Baykar.

Unmanned aerial vehicles are increasingly gaining prominence in the Libyan conflict as the air forces of the warring sides are limited to several dozen warplanes, which are old and lack adequate flight crews. The growing role of drones has led to a marked increase in mutual attacks on airports.

In the past several years, Hifter’s forces were already known to have used Chinese-made Wing Loong drones, supplied by the UAE. The drones, stationed at the al-Khadim base in eastern Libya, were employed in the Libyan National Army’s onslaught on Tripoli, which began in early April, but this time they have been confronted by the Bayraktars.

The first Turkish-made drones are believed to have reached Tripoli on May 18. Along with four drones, the deployment reportedly included two control stations and a number of operators. At the time, the buzz around the shipment was more about the 40 armored vehicles it included. The vehicles — the Kirpi and Vural models manufactured by the Turkish company BMC — were part of a cargo that a Moldova-registered ship brought to Tripoli from Turkey’s Black Sea port of Samsun.

Turkish drone involvement in the fighting in Libya first came under the spotlight June 1 as the Libyan National Army announced the downing of a Turkish drone that was bombing targets in Gharyan, a town south of Tripoli. On June 6, Hifter’s forces claimed to have destroyed two Bayraktar TB2s and wounded their two Turkish operators in a strike on the Mitiga airport outside Tripoli. Another Turkish drone was destroyed at the same airport June 30.

Fayez al-Sarraj, the prime minister of the Tripoli-based Government of National Accord, received assurances of continued Turkish support as he met with Erdogan in Istanbul on July 5. Soon reports emerged that on the same day an Ilyushin Il-76 aircraft, operated by the Ukrainian company SkyAviaTrans, had begun shuttling between Ankara and Tripoli for four days in a row. The plane allegedly transported eight TB2s, some of which were deployed in Tripoli and some in Misrata. A spike in airfield attacks followed the reported shipment.

On Aug. 6, Hifter’s forces, using a UAE-supplied drone, hit an Ilyushin Il-76TD belonging to SkyAviaTrans at the Misrata airport. The plane, which had just arrived from Ankara, was said to be laden with ammunition.

Turkish drones, armored vehicles and intelligence support were instrumental also in the Government of National Accord’s recapture of Gharyan from the Libyan National Army in late June. According to reports circulating on social media, the Bayraktars have also taken part in operations targeting Hifter’s forces in al-Jufra, Ain Zara and Wadi al-Rabia.

Erdogan has openly acknowledged Turkey’s military support for the Government of National Accord, despite the UN Security Council’s arms embargo on Libya. “We have a military cooperation agreement with Libya. We are providing to them if they come up with a request, and if they pay for it. They really had a problem in terms of defense needs [and] equipment,” Erdogan was quoted as telling a group of journalists June 20. He was candid also on the regional rivalry in Libya. “Egypt and the UAE’s [Crown Prince] Mohammed bin Zayed are supporting Hifter's forces. They were very strong in terms of equipment and drones. Now there is a balance after the latest reprisals. We will update the security agreement we have with Libya,” Erdogan said.

Erdogan has placed great importance on the development of Turkey’s defense industry sector, where his son-in-law is an ambitious figure. The defense industry has remained on track despite Turkey’s economic crisis, which has left other sectors struggling to stay afloat. The Turkish economy grew only 2.6% last year and was hit by recession in the last quarter, but growth in the defense sector stood at 17%. Industry representatives expect the figure to reach 20% this year.

Baykar has a special place in the sector. The company is currently developing a more advanced armed drone, called Akinci, which means “raider” in Turkish. Last week, the Industry and Technology Ministry announced 600 million Turkish liras ($103.9 million) in investment support for Baykar under an eight-year investment plan aimed at boosting the company’s drone-production capacity, including the manufacturing of 24 Akinci planes. Baykar has already supplied 75 TB2s to the Turkish military, in addition to clinching deals with Qatar and Ukraine.

So Erdogan must be quite delighted with his younger son-in-law, who is rarely seen in public and seems to dislike the spotlight, unlike his other, better known son-in-law, Treasury and Finance Minister Berat Albayrak, who is often under fire over the country’s economic woes. The drone business with the Libyans does seem lucrative, if only one could ignore the downside of Turkey becoming an enemy to other Libyans and a violator of UN sanctions.