Turkish President Recep Tayyip Erdogan is pressing ahead with his military venture in Libya even as the coronavirus pandemic is putting further strain on Ankara’s cash-strapped coffers. 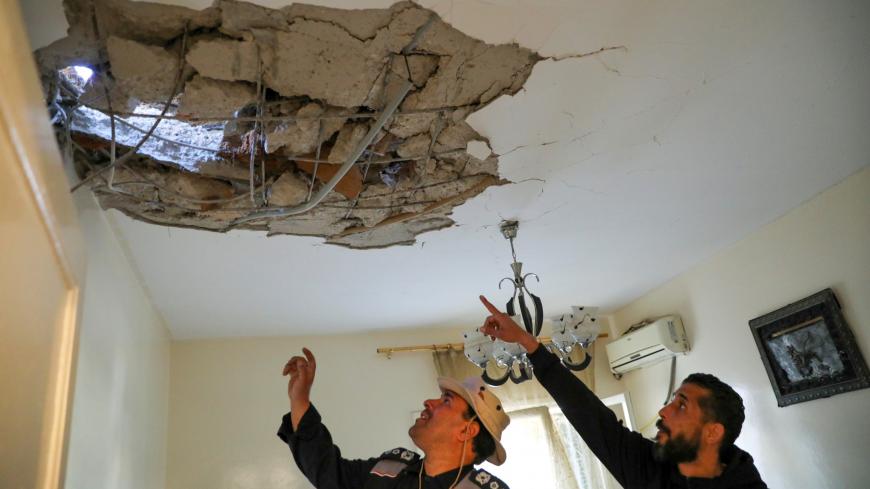 People inspect a damaged house after a shell fell on a residential area, in Abu Slim district south of Tripoli, Libya, Feb. 28, 2020. Turkey is continuing to press ahead with its backing of the Tripoli-based Government of National Accord in Libya. - REUTERS/Ismail Zitouny

As the coronavirus crisis rages across the world, those who hoped that guns might now go silent in theaters of war are finding their desires dashed. In Turkey, where the pandemic is bruising an already crisis-hit economy, President Recep Tayyip Erdogan has showed no sign of backing down from his cross-border military ventures. He seems unperturbed by budget constraints as he presses ahead with his intervention in Libya — and in Syria, as a matter of fact. Never mind that he has had to call for donations to help the needy in the coronavirus pandemic, stunning millions who expected support from the state but were effectively told that Ankara’s coffers are empty in the fight against COVID-19.

Turkey’s role in the Libyan conflict has once again come to the fore amid a renewed escalation around Tripoli since March 25.

Turkey’s allies have launched a fresh offensive against Khalifa Hifter’s Libyan National Army, backed by the United Arab Emirates, Egypt, Saudi Arabia and Jordan, in what is suggestively called Operation Peace Storm. Evoking Turkey’s Peace Spring and Olive Branch operations to undo the Kurdish self-rule in northern Syria, the name in itself speaks of Turkey’s influence in Libya, where Ankara backs the Tripoli-based Government of National Accord and its Islamist allies.

Turkish military commanders and intelligence officers appear to have a decisive say in the operation center at the Mitiga military academy near Tripoli at present. Erdogan himself had stressed at the outset of the intervention that the Turkish military’s role would focus on command and coordination.

The latest push of the Tripoli- and Misrata-based Islamist forces that Turkey backs aimed to capture the al-Wattia air base, held by Hifter’s forces since August 2014. Located some 160 kilometers (100 miles) southwest of Tripoli, al-Wattia is the second most strategic base in the area after the Mitiga airport. Hifter’s forces suffered heavy losses and lost the base on the first day of the operation, in which the active involvement of Turkish drones tipped the balance. Government of National Accord-backed forces along the Tripoli-Misrata route launched simultaneous assaults on Hifter’s forces at Rashfana, Ahia Barria and Naqlia Camp near Tripoli and Abu Qurayn and al-Washka to the west of Sirte.

In a counteroffensive March 26, Libyan National Army forces recaptured al-Wattia. They did not stop there, however, and marched on to Zuwara and surrounding settlements to the north and then to the Tunisian border, seizing a number of towns in the area as well as the Ras Ajdir border crossing. With their route to Tunisia now cut, the Government of National Accord and its Islamist allies have taken a huge blow.

Along the coastline, meanwhile, the Libyan National Army besieged Zuwara both from the south and the west. Should Hifter’s forces manage to take Zuwara, some 100 kilometers (62 miles) west of Tripoli, they could turn up pressure on the besieged capital from the coast. If Zuwara falls, the nearby city of az-Zawiyah might not be able to hold out for too long, either. The counteroffensive resulted also in the capture of Wadi Zamzam, some 238 kilometers (147 miles) southeast of Tripoli.

Hifter’s forces have raised various claims regarding Turkey’s involvement. According to the Libyan National Army, a Turkish Bayraktar TB2 drone that took off from the Mitiga airport was shot down near Tripoli on March 30. The Libyan National Army also claimed that missiles fired from a Turkish warship off Tripoli targeted its positions in al-Ajailat on April 1, without causing loss of life.

Meanwhile, a French navy frigate was reported to have intercepted a Turkish cargo ship in the Mediterranean on suspicion it was taking weapons, including air defense systems, to the Government of National Accord. The incident took place before the European Union launched, on April 1, a new naval mission dubbed IRINI — which means “peace” in Greek — to enforce the arms embargo on Libya.

Another striking reflection of Ankara's involvement in Libya is the mounting death toll among the mercenaries Turkey has transferred from Syria. According to the Syrian Observatory for Human Rights, the number of Syrian fighters killed in Libya has reached 156. The Libyan National Army, for its part, claims that some 500 foreigners have been killed while fighting in Government of National Accord ranks.

To limit the number of the Turkish boots on the ground, Erdogan relied largely on Syrian mercenaries, who came from various groups aligned with Turkey in Syria. According to the observatory, the number of Syrian fighters transferred to Libya has reached 4,750, with about 1,900 others in Turkey for training.

Yet Syrian fighters seem to regret joining the Libyan war. According to the observatory, some of them claim Turkey has failed to pay them the promised monthly salaries of $2,000. “Turkey paid our salaries for only one month. It has not secured anything for us. Even cigarettes, we hardly got them. We stay in a house but we cannot get out of it, since cells of Hifter’s forces are deployed throughout the area,” a Syrian fighter says in an audio recording obtained by the observatory.

The mercenary urges fellow aspirants to not come to Libya because Turkey has “fooled” those already in the country. “All of us want to return to Syria,” he said, adding that some groups are already preparing to leave Libya.

And while the war in Libya has not gone as expected for Turkey, its financial burden continues. Intriguingly, the Turkish public is not prepared to discuss the cost of either the Libyan nor the Syrian war. Critical voices from the opposition have yet to mature into comprehensive grouping questioning government policies.

On Jan. 2, Erdogan obtained parliamentary approval for the military deployment in Libya, soon after signing controversial accords on maritime borders and military cooperation with the Government of National Accord in late November. And while Turkey’s involvement in Libya has grown increasingly visible, the contractual terms of its military equipment shipments remain unknown. Are they being granted or sold?

Turkish-made equipment such as Kirpi armored vehicles, a product of BMC, and Bayraktar TB2 drones — manufactured by Baykar, a family business of Erdogan’s son-in-law Selcuk Bayraktar — have become a crucial element in the Libyan war. And while nobody thinks they are offered as grants, what the Government of National Accord has given in return remains anybody’s guess. The cost of other military activities and the source of the money paid to Syrian fighters remain unknown as well. The government has been tight-lipped on its Libya budget, ignoring written parliamentary questions by the opposition on the issue.

In a December decree, Erdogan set an upper limit of 20 million Turkish liras (some $3 million) for products and services to be provided to friendly and allied countries in 2020, including weapons and ammunition. This limit, however, appears rather irrelevant in terms of the military shipments to Libya, which have included even a Hawk air defense system.

Unal Cevikoz, deputy chair of the main opposition Republican People’s Party, submitted a parliamentary question on the issue in December, but the president’s office has yet to reply. On April 3, he submitted another written question, this time to the foreign minister. Cevikoz demands answers on how much Turkey has spent in the Libyan civil war and who are the beneficiaries of that spending, how much the Government of National Accord has paid for equipment such as drones and armored vehicles, how much Turkey has paid to fighters transferred from Syria and what budget funds are used to cover such spending, how many Turkish troops have been deployed in Libya and how many of them have died.

The government has spurned calls for transparency on the Libyan dossier thus far. In the face of questions and criticism, its response has been limited to pointing to Emirati shipments to Hifter’s forces and saying that Turkey is doing what it takes to protect its own strategic interests.