The warring parties in Libya are locked in a battle to gain the upper hand in the skies, the outcome of which will determine who grabs the strategic advantage in the conflict. 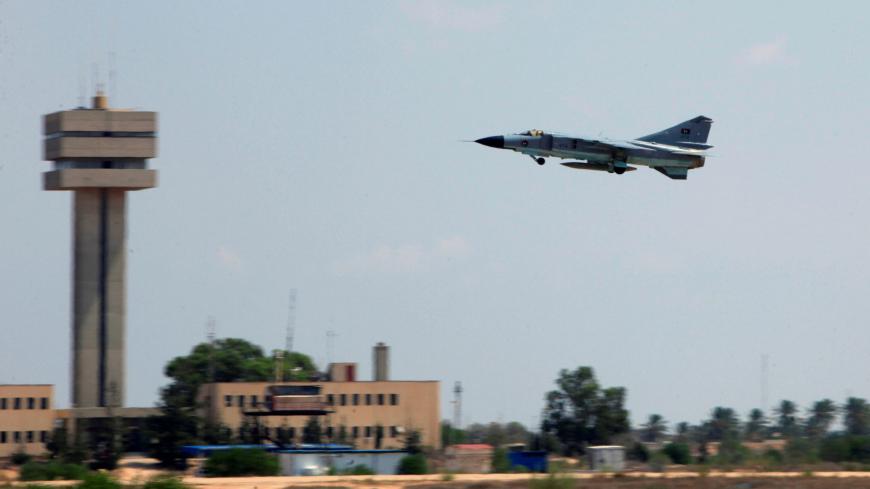 Renewed fighting in Libya, where both sides rely on drone support from foreign backers, has fueled a battle for air supremacy that augurs further escalation despite the coronavirus outbreak in the country. It also raises the prospect of Turkey sending more military aid to its allies.

Despite cease-fire efforts and an arms embargo, fighting in Libya has flared up since the second week of March, when the forces of rebel commander Khalifa Hifter launched a fresh push toward Tripoli, reinforced with fresh arms supplies from their allies — the United Arab Emirates, Saudi Arabia and Egypt. In early March, Hifter’s forces had already tightened their siege of the capital from the south and their siege of Misrata from the southeast.

The UN-recognized GNA said Operation Peace Storm was launched because Hifter’s forces had continued rocket and drone attacks on civilians in the Tripoli area despite a humanitarian truce over the coronavirus outbreak. It said Hifter’s troops attacked the prison in Ain Zara, south of Tripoli, wounding three officers March 24. In the five days from March 20, six civilians were killed in rocket attacks in the same area, it said.

The commander at the helm of Operation Peace Storm is Lt. Gen. Osama al-Juwaili, a former defense minister for the Tripoli-based government and a trusted aide of Fayez al-Sarraj, the head of the GNA who is also the acting chief of general staff. Juwaili is known as Ankara’s most trusted man among Libyan commanders and has visited Turkey several times.

Early on March 25, the GNA forces made a successful push on the Hifter-controlled al-Watiya air base and the al-Wishka axis east of Misrata, capturing a number of fighters and mercenaries as well as ammunition and military equipment. Backing the offensive from the air, Turkish drones targeted a command center, along with 10 other buildings and some 40 armored vehicles. A colonel who was a close Hifter aide in charge of coordinating Arab mercenaries from Sudan, Chad and Nigeria was reportedly killed in the raids.

The reason why Hifter’s Pantsir air defense systems failed to respond was likely the interference of KORAL radar jammers, the electronic warfare systems that Turkey had transferred to Libya in early February. GNA forces claimed that two other close aides of Hifter — Lt. Gen. Salem Driaq, the operations commander of Sirte, and his deputy, Gaddafi al-Sadai — were killed in the offensive.

The conflict in Libya has evolved into limited clashes on the ground, with the real warfare going on in the air. Against a backdrop of old, good-for-nothing helicopters and combat aircraft, it has essentially become drone warfare.

The Turkish Bayraktar TB2 armed drones — purchased by Qatar and operated by GNA troops trained in Turkey — are the GNA’s drone of choice. The drones, which carry two or four MAM-L smart micro munitions, are capable of surgical hits on ground targets from a distance of up to seven kilometers (nearly 4.5 miles). The 40-kilogram (88-pound) MAM-L munitions, however, have limited destructive power. GNA forces have used also Israeli Orbiter-3 drones for intelligence, surveillance, target acquisition and reconnaissance.

The Hifter-led Libyan National Army (LNA), for its part, has been actively using Chinese-made Wing Loong II drones, acquired by the UAE and Saudi Arabia.

On April 1, a Turkish frigate off the shore of Sabratha, 55 kilometers (34 miles) west of Tripoli, fired SM-1 surface-to-air missiles on LNA drones in what was a first in Turkey’s military involvement in the conflict. The Turkish navy’s Goksu and Gokova frigates have been providing air and naval protection support to GNA forces off the coastline between Tripoli and Sabratha since early February.

Turkey’s deployment of its HISAR-O medium-range air defense systems to Tripoli would not be a surprise as the power struggle in the war is increasingly becoming a battle for air supremacy, in which the frigates are capable of limited air defense support.

Though Operation Peace Storm has relied heavily on armed drones, a Turkish Air Force Boeing E-7T, flying off the coast to provide signal intelligence to Turkish forces on the ground, has been instrumental as well. Besides supplying intelligence about targets on the ground, the plane has tracked LNA drones, allowing Turkish anti-drone systems to jam and shoot them down.

Both the Moscow talks and the Berlin conference in January appear null and void amid the rekindled fighting and the parties’ escalating warfare for airspace control. Despite the UN arms embargo on Libya, both Turkey and the Emirati-Saudi-Egypt bloc have continued to ship weapons to their respective allies. Similarly, Russian mercenaries of the Wagner Group remain in Libya, backing Hifter’s forces, even though Turkish President Recep Tayyip Erdogan had voiced hope they would withdraw following talks with his Russian counterpart Vladimir Putin in early March.

In the meantime, the COVID-19 pandemic has reached Libya, leading some to hope that the fighting might let up. Yet even the prospect of a reluctant lull seems distant as fighters on the ground appear bent on carrying on with face masks and plastic gloves.

In sum, none of the actors has shown commitment to seeking a lasting cease-fire, as agreed in Berlin. A further escalation appears inevitable in Libya in the coming weeks. The party that gains the upper hand in the skies is set to grab a strategic advantage.