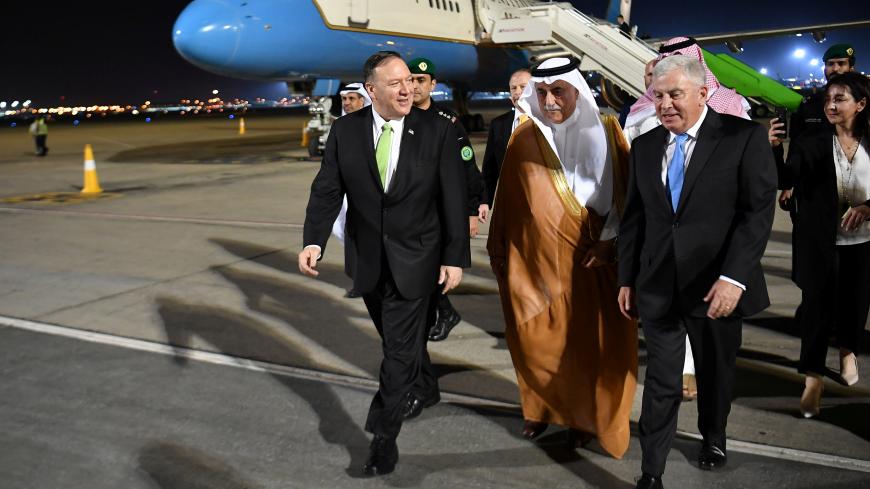 US Secretary of State Mike Pompeo walks after stepping off his plane upon arrival at King Abdulaziz International Airport in Jeddah, Saudi Arabia, Sept. 18, 2019. - Mandel Ngan/Pool via REUTERS

Resisting pressure from hawks to respond with force to the weekend attacks in Saudi Arabia, President Donald Trump said today he was ordering more economic sanctions on Iran. Yet he also said he believes that Iranian President Hassan Rouhani and his delegation should be allowed to come to the UN General Assembly in New York next week. Trump’s comments expressing his desire to avoid an escalation come as European diplomats forge ahead with efforts to get the parties to the table at the UN to reduce tensions and avoid war with Iran.

“We definitely need to start a new phase where people will sit at the table and try to resolve issues,” a senior European diplomat at the UN said today. “We are actively pushing to make sure that reasonable decisions could be taken in the days, weeks, months to come. We would encourage all sides to change course of action and be reasonable.”

“If it was up to me, I would let them come,” Trump told reporters traveling with him on Air Force One in California today, when asked if Rouhani should come to the UN next week.

“I’ve always felt the United Nations is very important,” Trump continued. “I would certainly not want to keep people out if they want to come.”

Trump ribbed Republican ally Sen. Lindsey Graham of South Carolina, who suggested the Iranians had been emboldened to carry out drone and cruise missile attacks on oil facilities in Saudi Arabia because Trump had not responded with force to the Iranian downing of an unmanned US drone in June. Yemen’s Houthi rebels claimed responsibility for the attacks in the kingdom over the weekend, while Iran has denied involvement.

“I actually think it’s a sign of strength,” Trump said regarding not responding with force against Iran.

“Ask Lindsey, how did going into the Middle East, how did that work out? And how did going into Iraq work out?” Trump continued, in language similar to the kind he used to mock John Bolton last week, when he asked him to resign as national security adviser. “So, we have a disagreement on that. And we have plenty of time to do some dastardly things.”

The United States and UN have sent investigators to the site of the sophisticated attacks to determine the perpetrator, and have not yet announced the results. But Secretary of State Mike Pompeo has repeatedly said that he holds the Iranians responsible for what he today called an act of war.

“The Saudis were the nation that was attacked,” Pompeo told reporters traveling with him to Jeddah, Saudi Arabia, today. “It was an act of war against them directly.”

Trump’s comments came amid reports that some members of the Iranian delegation have experienced delays in receiving their visas to attend the UN General Assembly, and as Pompeo seemed to justify possibly inhibiting their travel.

“If you’re connected to a foreign terrorist organization, I don’t know, it seems to me it would be a reasonable thing to think about whether they ought to be prevented to attend a meeting which is about peace,” Pompeo said en route to Jeddah.

“Look, the actions that the Iranian regime took violated the UN charter,” Pompeo said, referring to the Sept. 14 attacks on the Aramco facility that he attributed to Iran. “I spoke with [UN] Secretary [General Antonio] Guterres about it yesterday.”

French President Emmanuel Macron, who has led efforts to open a US-Iran diplomatic track and reduce tensions, condemned the weekend attacks in a call with Saudi Crown Prince Mohammed bin Salman on Tuesday.

“President Macron … assured the crown prince of France’s solidarity with Saudi Arabia and its population in the face of these attacks and reaffirmed France’s commitment to Saudi Arabia’s security and to regional stability,” the French president’s office said in a readout of the call. “In response to the request received by the Saudi authorities, President Macron confirmed to the crown prince that French experts would be sent to Saudi Arabia to take part in the investigations aimed at shedding full light on who was behind the attacks … and how they were carried out.”

“We share the desire to carefully establish the facts prior to any response,” a spokesperson for France’s Foreign Ministry told journalists today.

Macron is expected to meet with Rouhani in New York next week, as well as with Trump. Neither the French nor Trump have ruled out some sort of Trump-Rouhani encounter, while the Iranians have repeatedly said that a meeting will not happen.