The US secretary of state discounted the Iraqi prime minister's claim that on the day Iranian commander Qasem Soleimani was killed in Baghdad, he was going to pass on an Iranian message as part of indirect Iranian-Saudi communications. 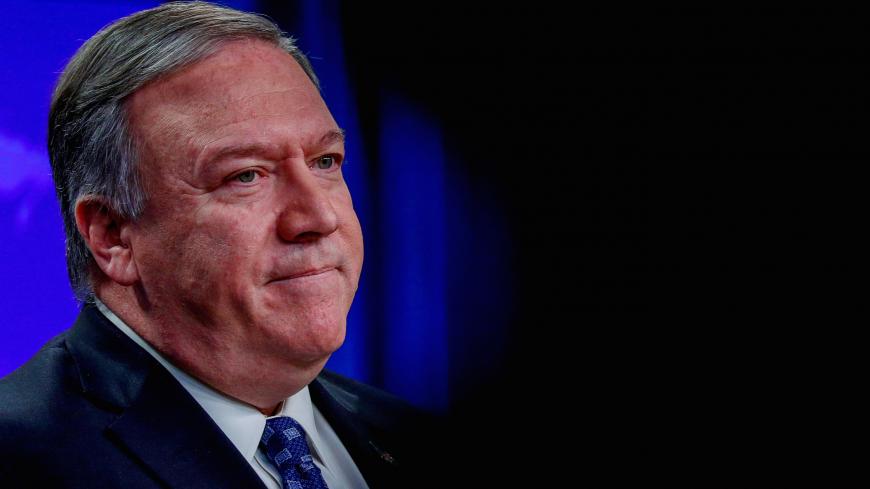 US Secretary of State Mike Pompeo takes questions during a news conference in the Press Briefing Room at the State Department in Washington, Jan. 7, 2020. - REUTERS/Tom Brenner

Secretary of State Mike Pompeo today mocked a claim first made by Iraq’s prime minister that Iranian Quds Force chief Qasem Soleimani, killed in a U.S. drone strike in Iraq last week, had been bringing a message from Iran as part of Saudi-Iran indirect talks on easing tensions that the Iraqi leader had tried to broker.

“Is there any history that would indicate that it was remotely possible that this kind gentleman, this diplomat of great order, Qasem Soleimani, had traveled to Baghdad for the idea of conducting a peace mission?” Pompeo told reporters at the State Department today.  “We know that wasn’t true.

“We’ve heard these same lies before,” Pompeo continued. “He was not there on a diplomatic mission trying to resolve a problem. I know there’s been some story that he was there representing a Saudi peace deal. I’ve spoken to my Saudi counterparts at great length. I’ll leave to them what the contents of their messages may be. But I can assure you that they will share my view, that he was not there representing some kind of agreement that was going to reduce risk or reduce the risks to the lives of Americans when he was on that trip.”

Iraqi Prime Minister Adel Abdul Mahdi told the Iraqi parliament Sunday that he had been due to meet with Soleimani on the morning Soleimani was killed by a precision US drone strike at the Baghdad airport, and that Soleimani was bringing a letter from Iran in response to Saudi-Iran back-channel communications on reducing tensions that Abdul Mahdi had tried to facilitate.

“Mahdi said Soleimani was supposed to carry a message from Iran ‘in response to the Saudi message that we brought to Iran in order to reach important agreements and situations regarding Iraq and the region,’” CNN reported.

An Iraqi official told Al-Monitor that Abdul Mahdi had indeed been trying to facilitate Iranian-Saudi communications on easing tensions, at the request of the Iranians. Those efforts involved Abdul Mahdi traveling to Saudi Arabia to meet Saudi King Salman bin Addul-Aziz Al Saud on the way back from a visit to China in late September, the Iraqi official said.

However, Abdul Mahdi’s mediation efforts were curtailed by Iraqi protests and unrest in October that led to his resignation in November, the Iraqi official said.

“Adel was trying to mediate between Iran and the Saudis, at the Iranians’ request,” the Iraqi official, speaking not for attribution, told al-Monitor. “Accordingly he paid a very short visit to Riyadh (three hours) and got a positive response from King Salman. But the situation in Iraq since October and later his resignation made him stop the efforts.”

Former US diplomat in Iraq Barbara Leaf said she had also been told on a visit to Iraq in late September about Abdul Mahdi’s quiet visit to Saudi Arabia, but said she was generally uncomfortable with the prospect of the Saudis allegedly trying to discuss an accommodation with the Iranians in the wake of the sophisticated attack on the Saudi Aramco facility on Sept. 14 that the United States has attributed to Iran.

“I don’t know how to judge Mahdi’s claim that Qasem Soleimani was coming with a message,” Leaf, now with the Washington Institute for Near East Policy, told Al-Monitor. “I am pretty cynical on that score. As a recent US official myself, I would have said, it is not great. Sort of indirect, proximity talks, message passing, appears to have been done in September. Right on the heels of the [Sept. 14] strike … it’s an awful environment for Saudi Arabia to be passing messages with the Iranians.”

“When I heard this from the Iraqis … what concerned me at the time is that the Saudis were [allegedly] entering into these sort of proximity talks/message passing … outside of the US security umbrella,” Leaf continued. She noted that the talks would have occurred after the Donald Trump administration was seen refraining from a military response to the Sept. 14 drone and cruise missile attacks on the Saudi oil facility, and that the Iranians would feel the Saudis were coming to the talks because the Trump administration refrained from responding.

The Iraqi official said the current situation of heightened US-Iran tensions playing out in Iraq is terrible, but he hoped the United States and Iran would eventually get back to the negotiating table.

“It is a very terrible situation for Iraq and the region,” the Iraqi official said. “But at the end it will open the table and [prospects for] making a deal. It depends if Trump can absorb the [Iranian] revenge without hitting the 52 targets as he declared. Otherwise, it will ignite huge damages in the region.”

The Iraqi official lamented Trump’s threats to impose sanctions on Iraq if Iraq’s government carried out the nonbinding motion voted on by Iraq’s parliament on Sunday recommending that foreign forces, including 5,000 US troops, be asked to leave the country.

Trump, speaking to reporters at the White House today, said he eventually wants to get US troops out of Iraq, but not yet, and reiterated his claim that Iraq should reimburse the United States for costs incurred building Iraqi infrastructure since the 2003 US invasion.

"At some point we want to get out,” Trump told reporters at a meeting with Greek Prime Minister Kyriakos Mitsotakis today. “But this isn't the right point. The other thing is, if we do get out, we've spent a tremendous amount of money on building airports and building one of the largest embassies we have in the world. And we want to be reimbursed to the various costs that we have had.”

If Iraq kicks out US troops now, "I think it's the worst thing that can happen to Iraq,” Trump continued. “If we leave that would mean that Iran would have a much bigger foothold, and the people in Iraq do not want to see Iran running the country."

The Trump administration’s defense of its killing of Soleimani and warning against Iranian retaliation came a day after Pompeo reportedly informed the UN secretary-general that the United States was denying a visa to Iranian Foreign Minister Mohammad Javad Zarif, who had been due to address a UN forum in New York later this week.

Zarif said on Twitter that denying him a visa was a violation of US obligations under the 1947 UN Headquarters Agreement, but indicated he did not mind skipping another trip to the United States. He was seen sitting next to Oman’s foreign minister at a conference Tehran was hosting today.

French President Emmanuel Macron also held an hourlong phone call with Iranian President Hassan Rouhani today. “President Macron underscored France’s deep concern at the recent events in Iraq and the region, as well as France’s determination to work toward easing tensions,” a readout of the call from the French government said. “He called on Iran to refrain from any measure likely to exacerbate the ongoing escalation of tensions. ... He also called on Iran to swiftly return to full compliance with its commitments under the JCPOA.” The JCPOA is the Joint Comprehensive Plan of Action, the Iran nuclear deal that Trump withdrew from in 2018.