President Donald Trump, responding to a reporter’s question in London, said the United States does not support the protesters in Iran before he later clarified his answer and castigated the Iranian government. 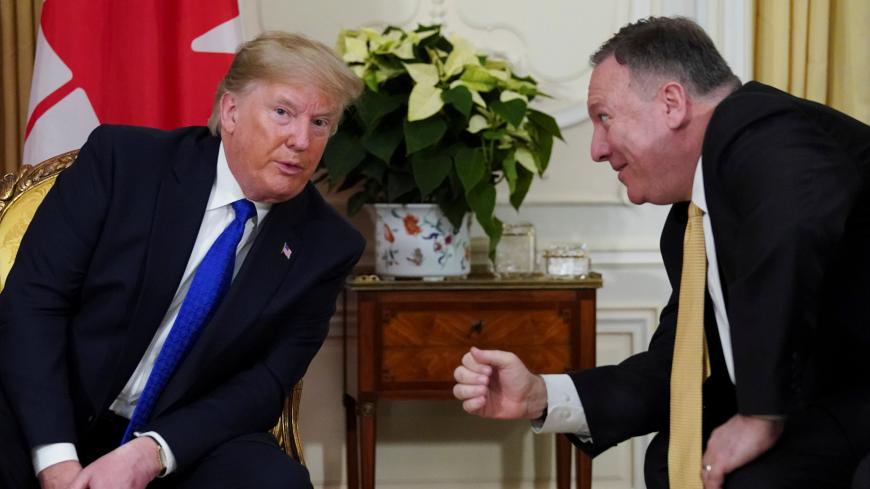 US President Donald Trump and US Secretary of State Mike Pompeo talk during a meeting with Canadian Prime Minister Justin Trudeau (not pictured), ahead of the NATO summit in Watford, in London, Dec. 3, 2019. - REUTERS/Kevin Lamarque

President Donald Trump created confusion today when, responding to a reporter’s question in London, he said the United States does not support the protesters in Iran, before later clarifying his answer. His comments on the Iranian unrest come as he met with French President Emmanuel Macron, who has spearheaded a mediation effort to try to get Iran and the United States back to the negotiating table, and as Oman’s foreign minister met with Iranian officials after holding discussions in Washington last week.

“You mentioned earlier the Iran protests,” an American reporter asked Trump when he and Macron took press questions following their bilateral meeting on the sidelines of the NATO leaders’ meeting in London today. “Does the United States support the protesters in Iran?"

“We do support them totally and have supported them from the beginning,” Trump said at his next meeting, with Canadian Prime Minister Justin Trudeau. The president said he thought the earlier question was asking about financial support for the Iranian protesters.

Earlier today, Trump raised the Iranian regime’s brutal crackdown on recent widespread protests that is estimated to have killed more than 200 people when asked if he had raised the killing of Saudi journalist Jamal Khashoggi when he spoke with Saudi leaders.

“Many, many people are being killed in Iran right now for protesting — for the mere fact that they are protesting,” Trump said at a meeting with NATO Secretary-General Jen Stoltenberg. “It's a terrible thing.”

“In those recent talks with the King of Saudi Arabia that you just referenced … did you bring up the murder of Jamal Khashoggi?” a journalist asked Trump.

“The press ought to get in there and see what's going on because the word is that thousands of people are being killed in Iran that are protesting,” Trump added.

Trump’s somewhat muted comments on the killing of Iranian protesters stands in contrast with those of Secretary of State Mike Pompeo, who has more robustly cited the unrest as vindication of the administration’s Iran “maximum pressure” policy.

"We’ve done our best to make sure they can continue to communicate by using the internet, which the Iranian leadership attempted to shut down in its entirety,” Pompeo told Fox News on Monday.

If the Iranian protests have bolstered the Trump administration’s confidence that its maximum pressure policy is at least helping spur internal Iran unrest, US allies in Europe and the region seem for now to be continuing with their recent efforts to try to de-escalate tensions to try to avoid an unintended potential broader conflict.

Omani Foreign Minister Yusuf bin Alawi held meetings in Iran this week, including with Iranian President Hassan Rouhani and Foreign Minister Mohammad Javad Zarif, a week after meeting with Pompeo in Washington. A diplomatic source in the region said the focus of bin Alawi’s shuttle diplomacy is on trying to advance Saudi-Iran reconciliation on the Yemen issue.

“The talks were most likely about the talks with the Houthis,” the regional diplomat, speaking not for attribution, told Al-Monitor. “Oman is taking a major role in mediating with Iran. …The Saudis would most likely want to exit from the war in Yemen after the alliance has been weakened as MBZ [Abu Dhabi Crown Prince Mohammed bin Zayed] is no more interested to join MBS [Saudi Crown Prince Mohammed bin Salman] in the war in Yemen.”

“Oman diplomacy, led by Minister Yousef bin Alawi who performs his job with low profile, always is expert in handling the job, as he maintains very good relations with Javad Zarif,” the diplomat continued. “Most likely Iran will respond positively to such a plan.”

Asked if there is a US-Iran dimension to the Omani shuttle diplomacy, the regional diplomat said yes, but that it is secondary to the focus on Yemen: “Yes. But in very slow motion. Oman … thinks that Yemen could be the key to build a certain level of trust between Iran and their adversaries in the region and could lead to collective efforts to calm down with Iran.”

The "private messages and regular offers by the US for negotiations are different from their public slogans,” Rouhani said after meeting bin Alawi in Tehran today.

“Iran has no problem with reviving bilateral relations with Saudi Arabia,” Rouhani also said. “We should join hands to ensure security of the Persian Gulf and the Hormuz Strait, and reject foreign interference.”

“Holding an inclusive and comprehensive conference with the presence of all countries with a stake (in the region) could be helpful" as "the current regional situation requires further dialogue and understanding,” bin Alawi said at a meeting with Zarif on Monday.

Macron, meeting with Trump today, did not mention his Iran mediation initiative, at least not in front of reporters.

France, as well as the other remaining parties to the 2015 Iran nuclear deal — Britain, Germany, Russia, China and Iran — are due to meet at the political director level at a meeting of the Joint Commission overseeing implementation of the accord in Vienna on Friday.

While the European parties to the deal have expressed mounting concern about Iran’s systematic reduction of its commitments to the deal over the past six months to protest the lack of sanctions relief it has received since the United States quit the deal last year, some analysts said they did not think the E3 (Britain, France and Germany) would move now to trigger the deal’s dispute resolution mechanism at the Joint Commission meeting this week, but would rather press Iran to not take further provocative steps.

“I think it is pretty unlikely we will see [a triggering] of the dispute resolution,” Henry Rome, an Iran analyst at the Eurasia Group, told Al-Monitor. “I think they have every incentive to kick the can down the road.”

Meanwhile, a European diplomat, speaking not for attribution, expected the first transaction using the European Union-backed INSTEX financial mechanism to facilitate permitted financial trade with Iran to go through this week ahead of the meeting in Vienna on Friday.