Iran vs. US: From Talk of War to Talk of Talk

Trump repeats his offer of talks with Iran, but Iran is not interested. 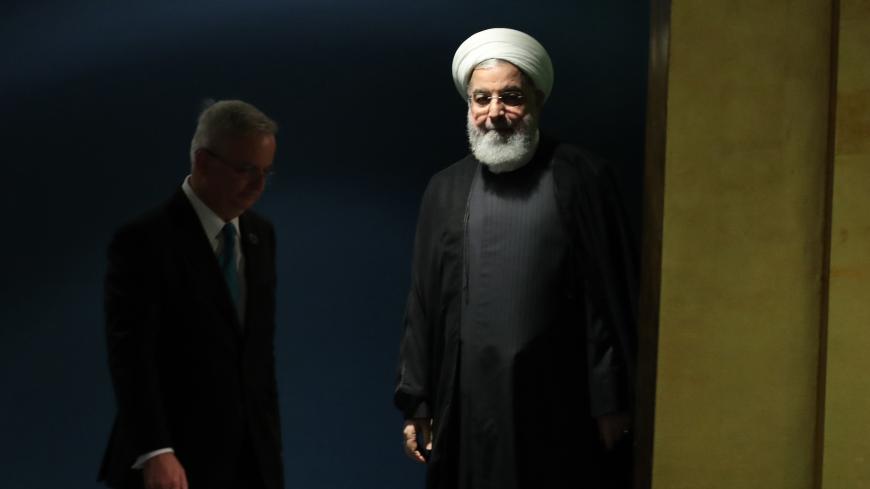 US President Donald Trump repeated his offer to talk with Tehran’s leaders, but his Iranian counterpart says he’s not interested in picking up the phone.

“If [Iran] called, we would certainly negotiate,” Trump told reporters on May 20. “But that’s going to be up to them. I’d only want them to call if they’re ready. If they’re not ready, they don’t have to bother.”

Iranian President Hassan Rouhani says he isn’t ready and won’t bother, as we reported here. “Although I personally support dialogue and diplomacy,” he said, “I flatly reject it under the current circumstances.”

But is that really the end of it?

Other countries are stepping in to try to bridge the differences. Iraq, Oman and Germany this week all indicated they’d be willing to engage both sides. And even within the Trump administration, there are differing voices — led by the president himself.

Absent a direct diplomatic channel, Rouhani’s rejection of dialogue comes with potentially high costs. Although acting US Secretary of Defense Patrick Shanahan said the threat from Iran is "on hold," The Washington Post reports that “Iran has made a dramatic shift in how it confronts the United States, abandoning a policy of restraint in recent weeks for a series of offensive actions aimed at pushing the White House to rethink its efforts at isolating Tehran, say diplomats and analysts.” The United States is sending 1,500 more troops to the Gulf and pushing through arms sales to regional partners to deter increased threats from Iran.

Trump said Thursday that he would order more troops to the region “if we need them. I don’t think we’re going to need them. I really don’t,” adding that “Iran has been a very dangerous player — a very bad player. They’re a nation of terror and we won’t put up with it. … But if we need [additional forces], we’ll have — we’ll be there in whatever number we need.”

Trump’s messaging on Iran — the offer to talk, the willingness to send more firepower — may confound Iran’s leaders, but, as we wrote last week, this is the stuff of “high-stakes diplomacy … the pain of US sanctions on Iran will only get worse. And the moment for diplomacy might pass. Trump’s patience may be tested, and the slight cracks that we see in the US approach to Iran could close as quickly as they have been revealed.”

Iran should take note that Trump does not seem to be assigning any preconditions for dialogue. Our soundings continue to indicate that the administration’s “12 conditions for a comprehensive agreement,” should be understood as a framework, not preconditions, for talks.

With Iran unwilling to pick up the phone, Iraq — a country that has felt the pain of war in the last two decades — has stepped up. Iraqi Prime Minister Adel Abdul Mahdi, whose country may have the most to lose from increased hostilities between the United States and Iran, said he is sending Iraqi delegations to both Washington and Tehran to “halt tension,” according to Iraqi state-run media, adding that both sides have told him they have “no desire in fighting a war.” Abdul Mahdi and Iraqi President Barham Salih are trusted by both the United States and Iran.

Makram Najmuddine was ahead of the curve for Al-Monitor on the Iraqi role, writing last week that following Secretary of State Mike Pompeo’s meeting with Iraqi leaders in Baghdad on May 7, "some Iraqi sources have indicated that the United States may consider Iraq as a bridge to an eventual dialogue with Iran — a role the Iraqis may be willing to play.”

Al-Monitor has covered Iraqi foreign policy under Abdul Mahdi and Salih, who act as bridge builders and proponents of economic integration within the region, both in the Levant and the Gulf.

The Iraqi prime minister is not looking for a breakthrough with his outreach. The short-term end game instead might be to walk back the current escalation and begin what is called in diplo-speak a non-conversation, that is, to quietly test a number of potential messages and steps to avoid miscalculation, including and especially in Iraq, while maintaining distance and deniability for both capitals. No surprise then that Iranian Foreign Minister Mohammad Javad Zarif is expected in Baghdad on May 25.

As part of this effort, Abdul Mahdi met on May 23 in Kuwait with Emir Sheikh Sabah al-Ahmad al-Jaber al-Sabah, who has also taken the charge to dampen regional tensions. As we reported last week, Qatar, Oman, Russia, Switzerland, and now, Germany, are also sending high-level emissaries to convey messages and signals to lower the temperature in the region.

Another trusted partner, the Sultanate of Oman, which has a well-established record of regional mediation and close ties with both Washington and Tehran, is also in the midst of shuttle diplomacy.

Oman's State Minister for Foreign Affairs Yusuf bin Alawi bin Abdullah, who was in Tehran on Monday, said, “We and other parties seek to calm tensions between Washington and Tehran." Oman’s ambassador to the United States, Hunaina al-Mughairy, told Al-Monitor on May 7 that “Oman has not been approached,” about mediation between the United States and Iran, “but I’m sure that if we were approached we would be happy to assist.”

Jens Plotner, political director for Germany’s Ministry of Foreign Affairs, visited Tehran on Thursday, and US Secretary of State Pompeo will travel to Berlin on May 31 to discuss Iran and other issues with German Chancellor Angela Merkel.

Both Tehran and Washington have denied that there is any formal mediation initiative, although State Department spokeswoman Morgan Ortagus said this week, “We appreciate any efforts by the Germans to help de-escalate the situation." An Iranian spokesperson said that most of the recent diplomatic visitors to Tehran were there “on hehalf of America.”

Iran may have its reservations about Russia as a mediator, as we have previously noted.

Max Suchkov writes this week from Moscow that Russia “will seek to maximize its leverage with both the Americans and the Iranians while hedging its own political and other investments across the region. This doesn’t necessarily mean Russia will ‘trade Iran in’ for illusory reconciliation promises from the Trump administration. But it wants to make it clear that Iran should keep its own expectations of potential Russian help soberly modest."

Alireza Noori adds from Iran that “the leadership in Tehran understands that Russia's power is limited and that Moscow is unwilling to enter a US-Iran conflict and rather seeks to reboot its strained ties with Washington. Placing all eggs in the Russian basket would therefore not appear to be the most logical choice for Iran.”

“The Iranians are indeed conscious that Moscow might favor a controlled level of tensions between Tehran and Washington, as it would redirect the US focus from Russia and the Commonwealth of Independent States toward Iran and the Middle East,” adds Noori. “US pressure also serves Russian interests as it pushes Iran further toward Russia, giving Moscow the status of an increasingly important partner of Tehran — and thus the position of being a power which Washington may rely on to effectively pressure Iran. Russia could further gain advantage from a hike in oil prices as a result of the US-Iran tension and Tehran's shrinking presence in the European energy market.”

Pompeo: Release of Americans would be ‘step in the right direction’

The conversation between the United States and Iran could begin with a goodwill gesture from Tehran about the Americans imprisoned there. Iranian Foreign Minister Mohammad Javad Zarif, in New York last month, declared that he has "the authority" for a prisoner exchange, but the effort went nowhere, as Laura Rozen reported. Secretary of State Pompeo was crystal clear on the Hugh Hewitt Show this week when he said that it is "absolutely the case that were [Iran] to release these Americans who are wrongfully held, it would be a good thing. It would be a step in the right direction for sure."