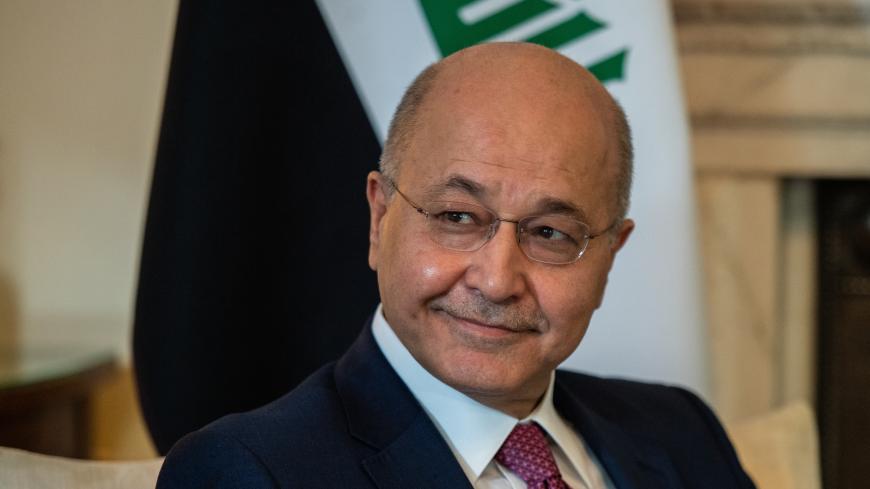 Last month Iraq released its “National Framework Document for a Unified Iraqi Policy.” This document matters; it charts a nonaligned foreign policy, stressing noninterference, regional security and economic integration. For a country that has been buffeted in recent years by political and military pressures from Iran and the United States, this is a striking new course, not just high-sounding principle. For the Trump administration, it’s a test: Will the US support a policy that emerged from the most promising, unified turn in Iraqi politics in decades? And how will Tehran react?

For Baghdad, there are hazards everywhere, including from Iraq’s neighbors, and from the potential for a US-Iran conflict.

Iraq’s national framework benefits from an exceptional level of cohesion among the country’s top leaders: Prime Minister Adel Abdul Mahdi, President Barham Salih and Speaker of the Council of Representatives Mohammed al-Halbusi. This power trio, known around Baghdad as the “three presidents,” has set a new bar for Iraqi governance. None of them controls a key party or bloc in the parliament, so they’re settled on a balance-of-power pragmatism based on the tenets of a "unified Iraqi policy." They put Iraq first and consult regularly, and are thereby able to manage crises with a unity and focus that is, to date, unprecedented in post-Saddam Iraq, as Farhad Alaaldin explains. And all three are invested in the US-Iraq relationship.

The most formidable obstacle to Iraq’s sovereignty, and to US interests in Iraq, is its much larger neighbor, Iran. Iran’s influence in Iraq, however, is multilayered — economic, religious, political — and may be nearly impossible to unwind. Iraq depends on Iran for electricity and gas for the foreseeable future. Iraq wants a quiet border and even more trade with its neighbor of 80 million. Iran can make life miserable for Iraq, if it so chooses. But it doesn’t choose to do so. Ironically, Iran needs Iraq more than ever because of US sanctions, and Iraq remains closely tied to Washington. The trend is therefore toward improved bilateral ties between Iraq and Iran. Baghdad has no interest in upsetting this trend and rocking the boat with Tehran.

Hamidreza Azizi writes that “Iran’s influence in Iraq is not waning but is, in fact, taking a more formal and institutionalized shape. In this vein, while Iran is expected to maintain its close ties with the [Popular Mobilization Units] factions even after their integration into the Iraqi armed forces, Tehran still sees developing ties with Baghdad as a crucial aspect of its strategy to diminish the negative economic and political effects of increasing American pressure.”

This doesn’t mean that Iraqi leaders welcome a heavy Iranian hand in their affairs. Corruption in Iraq remains an immense problem, and a lot of it originates in Iran.

Meanwhile, the Islamic Revolutionary Guard Corps this week attacked bases in Iraq linked to Iranian Kurdish opposition groups, which oppose the government of Iran and are accused of being linked to the Kurdistan Workers Party (PKK) in Turkey (see below). The shelling provoked an angry response from the Kurdistan Regional Government of Iraq, which Iran has warned against harboring terrorist groups. Baghdad has so far refrained from responding.

While Iraq is not party to either the United States' or Iran’s grievance with the other, it suffers the consequences, whether through US sanctions or pressure, Iranian corruption, or Iranian actions that would necessitate American military retaliation in Iraq, as we discuss below.

To the north, the Turkish military has stepped up attacks on PKK bases in the Qandil Mountains on the Iraqi-Turkish border. Just as with the Iranian attacks this week, Baghdad would prefer to look the other way. Qandil is remote as can be. But the attacks have become more frequent and intense in recent weeks, testing Baghdad’s resolve.

Iraq’s Ministry of Foreign Affairs labeled the Turkish bombing “unilateral acts of war” that “violate Iraqi sovereignty.” Tough language from a neighbor, but essential to Iraq’s determination to be nonaligned.

Dana Taib Menmy writes that “repeated civilian casualties as a result of Turkish airstrikes, artillery and cross-border operations, coupled with Baghdad and Erbil’s incapability to stop the violations, has led to the establishment of a new force from the Qandil Mountains under the name Self-Defense Forces … The new force said it will target Turkish army bases inside the Kurdistan Region.”

The Turkish attacks come as trade between Turkey and Iraq has suffered from a series of Iraqi actions to protect Iraqi agricultural goods. Some Turks see an Iranian hand in these measures to privilege Iranian goods in the Iraqi market, as Fehim Tastekin reports.

The most dramatic shift in Iraqi foreign policy is its relations with Arab countries.

We have written here about Iraq’s regional economic integration strategy with Jordan and Egypt; the Iraqi Cabinet approved the Iraq-Jordan pipeline project July 10. Last month the emir of Kuwait, Sheikh Sabah Al Ahmad Al Jaber Al Sabah, visited Iraq, only his second trip to the country, the previous one being the Arab summit in 2012. Abdul Mahdi was in Saudi Arabia in April and Kuwait and Qatar in May; Salih had paved the way with an earlier tour of Arab capitals back in November.

The reset in Iraq’s Arab relations cannot be understated; it is a watershed. Abdul Mahdi and Salih are washing away the perception of sectarianism in Iraq’s regional policy while positioning Iraq as a possible bridge, rather than a partisan, in relations between Iran and Saudi Arabia.

US deterrence and diplomacy in Iraq

The Trump administration is right to back this course in Iraqi foreign policy, including and especially Baghdad’s efforts to accelerate economic ties with friendly Arab states, which, over time, will provide Iraq a cushion, and leverage, to counter Iranian influence. That is, however, a long game.

In the short term, the first priority is deterring Iran, and only the United States can do that. US Secretary of State Mike Pompeo warned Iraqi leaders in May that the United States would respond with force if Americans were attacked in Iraq, and repeated these warning after assessing that drone attacks on Saudi Arabia’s oil industry that month originated in Iraq, rather than Yemen, as originally thought. US President Donald Trump tweeted June 25 that an Iranian attack on “anything American” would be met with “overwhelming force” or even “obliteration.”

Iran should have gotten the message — don’t pick a fight with the United States in Iraq.

Deterrence can be matched with diplomacy, where Iraq can also play a role. Iraqi leaders are especially well placed to convey quiet messages between Washington and Tehran, including confidence-building measures to prevent escalation, and even regarding a possible regional security approach for the Gulf, under UN supervision, which Russian President Vladimir Putin raised with Trump at the G20 summit in Osaka June 28, as we reported here. Some of the tradeoffs Iraqi leaders may seek, as part of these exchanges, are understandings or exceptions regarding US sanctions, as has been the case until now.

This approach requires the United States to accept that unraveling the Iranian knot in Iraq is akin to a kind of diplomatic brain surgery, where certain slips along the way can threaten the patient, in this case Iraq, and facilitate a conflict that would undo all the steady if fragile gains in Iraq under the present government.