Egyptian leaders from Anwar to Sisi have attempted — and failed — to build lavish cities to relocate dense urban populations. 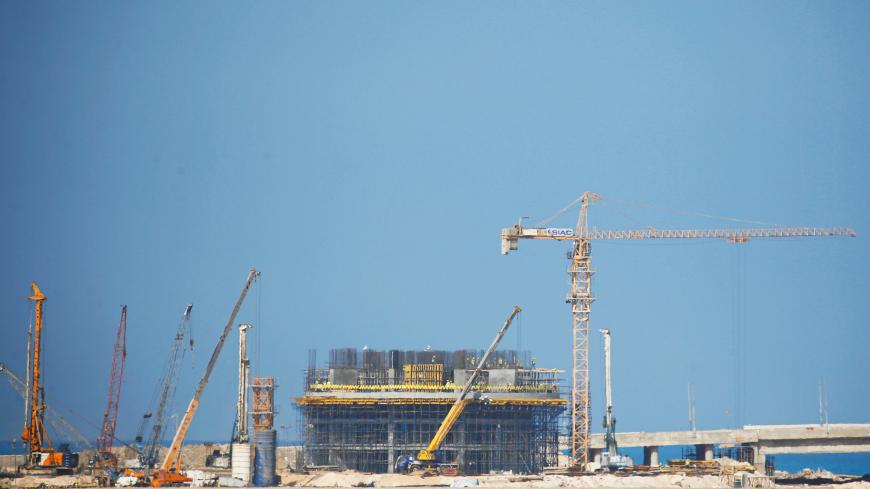 Located on Egypt’s northwest coast, New Alamein City is advertised as the “New Riviera” and the first of the “millennial cities.” The Egyptian government allocated 3 billion Egyptian pounds ($183.3 million) to create this city, which aims to host some 2 million people. The Ministry of Antiquities has even relocated the Ramses II obelisk from Cairo’s Zamalek neighborhood to the new city to give it a bit of grandeur. New Alamein is expected to be used as the government's summer residence, just like Sochi in Russia.

But will this city, despite the efforts, become one of Egypt's ghost cities — lavish but unpopulated?

Building cities is nothing new in Egypt. Former presidents, from Anwar Sadat to Hosni Mubarak, have encouraged building new cities to reduce urban encroachment on agricultural land and limit the growth of slums around cities. Most of these cities, unlike New Alamein, which is on the Mediterranean coast, have been in the desert, like Sadat City and 6th of October. New Cairo and the New Administrative Capital — designed to house parliament and many government buildings presently in Cairo — are both inland.

The strategy of building new cities has accelerated under President Abdel Fattah al-Sisi, David Sims, a Dutch economist and urban planner based in Cairo, told Al-Monitor.

But the new cities have failed to attract residents, or, at least, as many residents as the government intended, Sims said. On the contrary, the government’s and the private sector’s excessive construction in recent years, coupled with rising housing prices, have led to stagnation in the real estate sector, which accounts for 16.4% of Egypt's gross domestic product.

The government under Mubarak funded the construction of two cities in 2008, Ibn Baitak 1 and Ibn Baitak 2, located in central Egypt, east of Beni Suef. Eleven years have passed since then, and though thousands of families dreamed of living in sophisticated housing complexes, those projects are now dust-covered ghost cities.

Rajab Bakri, an imam who bought a house from the government in Ibn Baitak 2 in 2008, told Al-Monitor that the two cities, which consist of 6,000 housing units, lack infrastructure. They have no sewage system, roads or wider transportation networks. The government only recently built two primary schools east of Ibn Baitak 2.

Bakri said he has almost no hope of moving into his new house. After Mubarak, the successive authorities have refused to complete the construction of services in the cities, despite pressing demands and demonstrations.

Sims said that Mubarak's Ibn Baitak project was intended to relieve pressure on old cities and have citizens relocate from the Nile Valley to the desert, just like similar projects adopted by Sisi.

On the southern outskirts of Cairo, many newly built compounds and small towns are devoid of residents. These projects are born dead, such as al-Moukhabarat Distict, the October Gardens District, the Spanish District and the Northern Expansions Neighborhood, which were built by private companies under the guidance of the Urban Communities Authority.

“There has been an architectural boom in Egypt since 2014,” Sims said. “The government and the private sector are currently working on 21 new cities across the country, seven of which are located around Cairo.”

Many of the new cities, Sims said, such as New Qena, New Fayoum, New Toshka, New Sohag and New Ismailia are still uninhabited, or only one-tenth of the expected residents settled there.

Ahmed Sayed, owner of a real estate company, has worked since 2017 on the Investors Compound Project in the north of 6th of October City, in cooperation with several private companies. Two years on, Sayed still struggles to sell houses in his project due to a state of distrust caused by the empty surrounding compounds.

Sayed told Al-Monitor that buyers visit the site only to find that the surrounding cities are empty. “They change their mind out of fear that the project will end up facing the same fate,” he said, explaining that the company was only able to sell a quarter of the project's homes over two years despite offering huge incentives.

Sayed, who asked that the name of his company remain confidential, said that new neighborhoods need much more time to build infrastructure. Yet he said it is 6th of October City, not the private sector, that is responsible for providing such services.

Despite these empty compounds, the government, together with Arabia Holding Company, embarked in April on the construction of Sun Capital, less than a kilometer away from 6th of October City.

Even if the state completes construction and paves roads in the new cities, Badrawi said, these projects still suffer from a lack of transport, job opportunities, medical facilities and shops. Given these conditions, few people are willing to move to these cities.

Sims said that between 2006 and 2016, the population of Greater Cairo increased from 16 million to 22.5 million. During that same period, new cities received only 770,000 people, as per the Central Agency for Public Mobilization and Statistics (CAPMAS). In other words, these cities absorbed a mere 14% of the increase, while the rest remain in Cairo and its slums.

Sims pointed out that the government's estimates of the number of residents moving to new big cities are overly optimistic, and added that according to the Urban Communities Authority, the population of 6th of October City, for example, amounts to 2.9 million people, while the CAPMAS statistics in the September 2017 census revealed that the figure does not exceed 349,000, which is a huge difference.

Sims was skeptical about the state's ability to secure the huge numbers it is seeking to transfer to the New Administrative Capital, because residential neighborhoods there are spaced out, with little communication between them.

Explaining that construction is random in the New Administrative Capital, he said, “The government has provided private companies with plots of land, and these companies are building spaced-out and heterogeneous compounds on these lands.”