The Nazlet al-Saman slum blemished the Giza Plateau for many decades, but its ongoing removal is bringing criticism of the government. 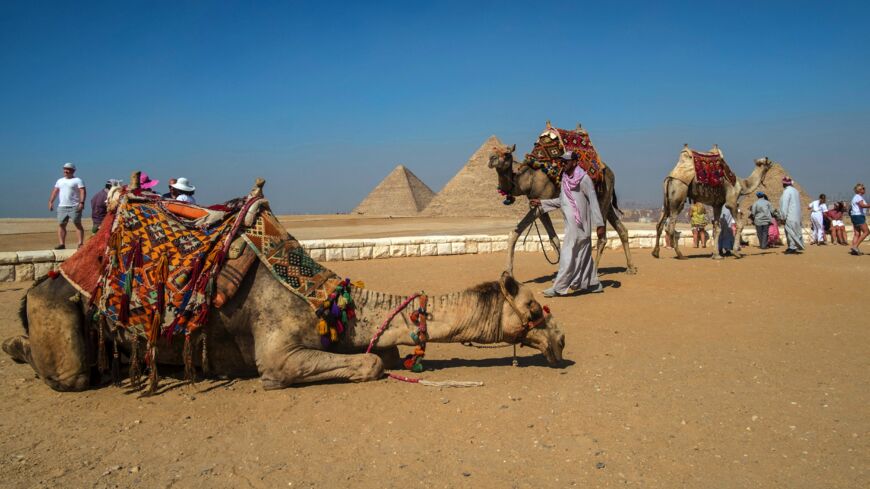 Camel trainers wait for tourists at a promontory overlooking the Giza pyramids at the ancient necropolis on the western outskirts of the Egyptian capital's twin city of Giza on July 13, 2021. - KHALED DESOUKI/AFP via Getty Images

CAIRO — Egyptian authorities have started relocating the residents of a sprawling slum near the Giza Plateau to a new housing community, drawing a lot of criticism but also giving insight into the ongoing upgrade of one of the most important sites on Egypt's tourist map.

The Nazlet al-Saman slum formed over the years only meters from the Great Pyramids of Giza and kept growing.

It now houses 50,000 people who mostly earn a living by providing services to foreign tourists visiting the Giza Plateau.

Those residents include hundreds of horse and camel owners whose services turned into an integral part of plateau tours over the years.

Many of those visiting the plateau remember the camel and horse rides they took in the area as well as the owners of the horses and the camels by name.

Year after year, however, the same owners and the slum where they live turned into part of the problem in the area.

The presence of such a rambling slum by the pyramids posed dangers to the area amid warnings by specialists that sewage leaks could threaten the plateau and the pyramids.

Some of the tourists visiting the plateau also complained against "aggressive" behavior by some of the horse and camel owners.

The relocation of the residents of Nazlet al-Saman signals the demolition of the slum and others around the pyramids.

The slums constitute signs of what went wrong with Egypt's urban crush, which has started to pose dangers to the country's ancient heritage.

But the relocation angers some of the residents who say their livelihoods will be negatively affected.

"We live and work in the same place," Abdelaziz al-Gabri, a slum resident who earns a living by selling souvenirs to tourists visiting the pyramids, told Al-Monitor. "This means our relocation will do away with our businesses."

Some rights advocates also fault the government for destroying the business prospects of the slum dwellers, including the owners of dozens of bazaars, gift shops and restaurants.

"This is why the government needs to avoid doing this by finding alternative markets for these people," human rights lawyer Negad al-Borae told Al-Monitor. "I also hope the government will compensate the residents of the slum properly for taking their homes away from them."

The slum's residents will be moved to a new housing community also very close to the Giza pyramids that will cost the government 2.2 billion Egyptian pounds ($141 million) to build.

The relocation process is part of a national plan for the eradication of slums around Egypt.

The administration of Egyptian President Abdel Fattah al-Sisi has so far moved thousands of families from slums around the nation to organized housing constructed by government-affiliated companies.

The new housing is usually furnished and given for free to beneficiaries, in line with Sisi's social development policies.

The same slum eradication program, especially in the case of Nazlet al-Saman, casts light on Egypt's ongoing upgrade of the Giza Plateau, which aims, specialists say, to put it back on the international tourist map years after it suffered problems that scared tourists away.

"The ongoing upgrade will put the plateau on the international tourist map again," independent tourism expert Alaa al-Ghamri told Al-Monitor. "The plateau was neglected for many years in the past."

Egypt has been struggling to inject life into its tourism sector, which contributes 11.9% of the country's gross domestic product and employs 9.5% of its workforce of 27 million.

The sector has been in a major slump, initially because of the 2015 downing of a Russian passenger plane over the Sinai Peninsula, and now because of the COVID-19 pandemic.

The upgrade of the Giza Plateau started in 2009 and should have taken three years to complete.

The government allocated 400 million Egyptian pounds (roughly $25.8 million) then for the implementation of the project.

The project came to a screeching halt in 2011 when the popular uprising against then-President Hosni Mubarak erupted.

It was set into motion yet again in 2014 when Sisi came to power.

The project includes the removal of all slums and buildings around the plateau.

It will divide the Giza Plateau into three main sections, each of which will have its own distinct features and services for the enjoyment of tourists and the protection of the monuments.

The first section of the plateau includes the pyramids, the Sphinx and potential excavation sites.

The third section of the plateau will contain a visitors' center that will be constructed over 4,000 square meters.

The center will contain windows where entry tickets will be sold, along with several gift shops, bazaars and restaurants.

It will also contain a major library and a cinema that will air documentaries about the plateau's history and contents.

"The center will prepare tourists for what they will see inside the plateau," Ashraf Mohieddin, the Giza Plateau antiquities chief, told Al-Monitor. "It will give them information about everything they will see during their tour."

Once they leave the center, visitors will have electric vehicles waiting to take them on guided tours across the plateau.

Those visiting the plateau will pass by seven main points, including the pyramids and the Sphinx.

The points will also include the Western Cemetery.

The equipment for the sound and light show, which tells the story of the Great Giza Pyramids through sound and light techniques that reflect on the pyramids and the Sphinx, will be moved from the vicinity of Nazlet al-Saman to the third section of the plateau.

The same section will contain other activities, including horse and camel rides, and this is where Nazlet al-Saman's dwellers who were moved to a nearby housing community can find jobs, but in an organized manner that constitutes an addition to the area, not a deformity, officials said.

The upgrade of the plateau will elevate the area into a distinguished site, especially with a number of important projects taking place nearby.

These projects include the Grand Egyptian Museum, a gigantic facility that will house around 100,000 ancient artifacts.

Egypt is also constructing an international airport in 6th of October City, a major urban community on the outskirts of Cairo.

The airport will allow incoming tourists to reach the Giza Plateau and the Grand Egyptian Museum without having to go through the overcrowded part of the Egyptian capital.

Changes taking place in the area will also make it easy for tourists to reach other ancient sites in close proximity, including — among others — Saqqara and Dahshour.