Why Egypt is placing its pyramids under military protection

Officials are taking tourists’ complaints to heart as they prepare to rejuvenate the great pyramids area, employing a company affiliated with the armed services to pick up the project that was abandoned in 2011. 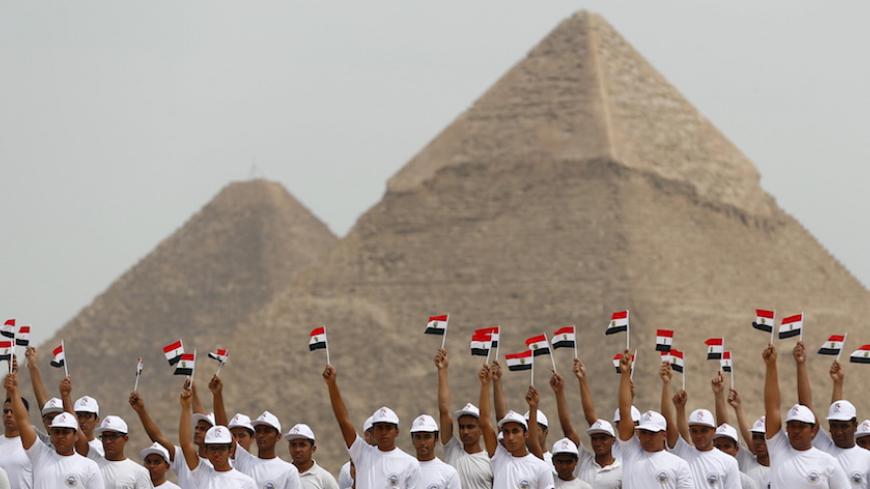 Students from the Egyptian Military Academy hold up Egyptian flags at the opening of the Egyptian International Parachuting Championship, which is organized by the Egyptian Parachuting and Air Sports Federation (EPAF), in front of the great pyramids of Giza, Egypt, March 2, 2016. - REUTERS/Amr Abdallah Dalsh

CAIRO — Following years of disorder and neglect at Cairo’s great pyramids, Egypt is launching a renovation program to make the area safer, cleaner and easier to navigate for tourists, and more secure for its archaeological treasures.

Egyptian Minister of Antiquities Mamdouh al-Damaty has called on Queen, a national service company affiliated with the armed forces, to develop and renovate the site. A ministry official said the company has already visited the site numerous times in preparation and plans to begin work this month.

The source said the ministry has yet to declare the cost of the project, noting that the contract will be renewed annually.

Tourists have complained about vandalism and say they face harassment from persistent vendors peddling souvenirs. Videos posted online in early February show undercover footage of people stealing stones from the plateau to sell.

However, the rock stealing wasn’t the most talked-about story to emerge concerning the pyramids. That title goes to Cuban pornographic actress Carmen De Luz’s visit to the pyramids, which made the rounds last year on social media. After she posted racy images of herself touring the ancient site, rumors emerged that she had shot an adult film there, which she denied.

Archaeologist Mohammad Rihan told Al-Monitor that stopping breaches and violations would accelerate the development process. The project will include an aesthetic wall contouring the archaeological site, surveillance towers, pathways for visitors and shuttle buses.

In mid-January, Egyptian President Abdel Fattah al-Sisi met with the ministers of housing, utilities, urban communities, tourism and antiquities, in the presence of the heads of the Armed Forces Engineering Authority and the Urban Planning Commission, as well as Ibrahim Mahlab, the presidential assistant for national and strategic projects. The group discussed ways of developing the area to enhance the services provided to visitors and tourists.

According to a statement from the Ministry of Antiquities last month, the company will install power generators and electrical connections to light the archaeological area and Zaheer Sahrawi (a desert corridor adjacent to the Nile Valley), and pave the inner and outer roads of the corridor. The contract calls for Queen to install steel gates at the entrances of the Dawab and Abu Owayan tomb areas, set up 100 signboards and enhance internals roads.

The development will include information desks at the entrances of the Mina House and Sphinx hotels, 50 portable and fixed toilets, and surveillance enhancements for police to monitor the Faiyum pyramid area and the Zaheer Sahrawi streets.

The Giza Plateau will receive a comprehensive infrared security system, along the lines of the system in the Temple of Luxor, in addition to surveillance cameras to cover the entire region.

According to a study carried out by the Ministry of Tourism in December, 58% of tourists polled said the area isn’t safe, while 70% said it is unclean and 74% cited a lack of clear signage.

The study said the pyramids area needs further development and enhancements to improve existing services, and signs to provide directions and other information and prohibit littering. It stressed that improving security will help limit harassment and begging.

Tourists visiting the pyramids face a number of annoyances, Eric Schenck, a young American living in Egypt, confirmed. He told Al-Monitor that during his second visit to the site, he noticed a number of drawbacks, in particular pushy vendors peddling goods.

Schenck also said that the process for entering the site was very disorganized. He visited on a Friday, part of the weekend in Egypt, and the area was packed with tourists, including schoolchildren on field trips. In his view, the site wasn’t equipped to handle such a large number of visitors.

He recounted his first visit to the pyramids, coming alone just days after arriving in Egypt. “It was a bad experience and I felt threatened just being there. I also felt that I was being duped, paying more than I should have for everything.”

Commenting on the sound and light show that is held at the pyramids at night, Schenck said it was very boring, used low-level technology not befitting of the location, and didn’t live up to the advertising.

The American tourist also said the pyramids site needs more restaurants, so that visitors can eat before entering, and doesn’t have enough bathrooms.

According to the Ministry of Antiquities, the pyramid development project started in 2008 and was suspended in 2011 due to the revolution.

The development budget then was estimated at about 350 million Egyptian pounds ($45 million). The Ministry of Tourism had allocated 20 million pounds toward the effort.

Mohammad al-Attar, an official at the pyramids media center, told Al-Monitor the first phase of the plan that had already been adopted by the Ministry of Antiquities before the revolution will be completed in April with the inauguration of the visitors’ center. This center will be equipped with TV screens displaying documentaries on the history of the region and its archaeological sites.