Thoughtful planning and government management seem indispensable to a return on investments for Egypt. 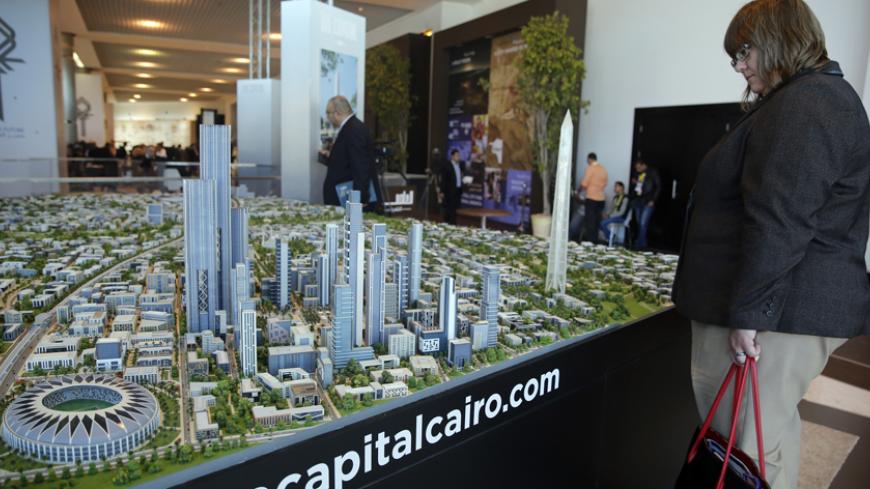 A delegate looks at a model of a planned new capital for Egypt during the final day of the Egypt Economic Development Conference in Sharm el-Sheikh, March 15, 2015. - REUTERS/Amr Abdallah Dalsh

The Egypt Economic Development Conference, held in Sharm el-Sheikh in mid-March and attended by Arab and international leaders, has achieved overwhelming success and attracted initial investments estimated at $60 billion, according to the closing speech of Egyptian Prime Minister Ibrahim Mehleb. The largest deal, estimated at $45 billion, was signed during the conference between the Egyptian government and the United Arab Emirates’ Emaar Properties and aims at creating a new administrative capital.

The General Authority for Investment and Free Zones has set up an investment map for projects to be implemented across Egyptian provinces. The map presented at the conference shows the most potential opportunities expected to be implemented over the next 30 years. While the opportunities include 336 projects in the fields of tourism and entertainment, these projects — and especially the new administrative capital — raise several questions about their economic viability. The time frame for the completion of the new economic capital is five to seven years. As for the other projects, details have not been announced yet.

Former Minister of Economy Sultan Abu Ali told Al-Monitor that the main motive behind the creation of the new administrative capital is the rapid expansion of Cairo and its major problems, which include traffic issues as well as social problems that result from 16 million people, or one-sixth of the population of Egypt, living in the capital. This overcrowding has also led to the emergence of slums in Greater Cairo along with an increased crime rate and more homeless children.

Abu Ali said the establishment of the new administrative capital would neither solve the problems of Greater Cairo nor be of any benefit to Egypt, and would lead to more complicated problems such as increased traffic and would largely waste Egypt's resources without being much of a sustainable and successful solution to the growing population in Cairo, the inadequate investment in infrastructure and the lack of horizontal expansion (the uncontrolled and disproportionate growth of an urban area into the surrounding countryside). The Egyptian population is slowly moving from the Nile Valley, which makes up 3.5% of the country’s total surface area, to the desert, which covers Egypt’s remaining surface area.

The deprivation of the countryside in the north and the south of investments and services is also exacerbating the problems in Cairo and elsewhere. Building a new administrative capital near Cairo, at a distance of 45 kilometers (28 miles), will further attract people and lead to the continuation and possible intensification of the current problems, including increased pressure on electricity and water sources in Greater Cairo.

Abu Ali added that this plan requires huge capital that Egypt direly needs to finance major projects in “agriculture, transport, electricity and infrastructure in general.” Abu Ali said these funds are needed to increase the gross domestic product (GDP), which has fallen to an unacceptable level. An administrative capital as proposed will be a costly undertaking. The establishment of facilities in the proposed location will exhaust resources — especially if funded outside the budget, through the sale of new lands, for instance — which should be allocated first to more important uses to either increase GDP or reduce the domestic public debt that now stands at a whopping 1.924 trillion Egyptian pounds ($253 billion).

Abu Ali said Egypt does not need a new administrative capital, but a new political capital — which should be at least 600-700 kilometers (373-435 miles) away from Greater Cairo to ensure the settlement of citizens in it rather than commute every day. The best option would be the Toshka spillway, in the southwest of the country. The current location of the new administrative capital is close to poor parts of Egypt and is located only about 45 kilometers (28 miles) east of Cairo.

We must learn from the experience of Sadat City. Late President Anwar Sadat decided in 1976 to establish this city, which lies 90 kilometers (56 miles) from Cairo, wanting to turn it into a new administrative capital. He started to transfer ministries to the new city, at a cost that reached 25 million Egyptian pounds ($10 million). But the project failed for various reasons. Chief among these was the challenge of transportation between Sadat City and Cairo. To address this issue, the ministries’ buildings were annexed to the University of Menoufia and used as space for new colleges. The project was a fiasco and did not benefit the economy, infrastructure or security.

Salah el-Din Fahmy, head of the economics department at Al-Azhar University, told Al-Monitor that an investment map has been prepared and will be updated as soon as new and suitable investment opportunities are submitted by Egyptian provinces.

Fahmy said that while the establishment of tourist and entertainment resorts had the largest share in the investment map, the construction sector in general is the locomotive for the development of the economy as each new building requires about 90 industries, trades and professions, including, among others, steel and cement.

He added that each province's location and resources will determine which projects are implemented. For instance, some projects are to be implemented in the desert, and there is an extensive project proposed for the use of white sand in the Sinai Peninsula for the manufacture of silicon. (The price per ton of white sand is only $20, as opposed to $10,000 if it is manufactured and turned into pure silicon. Advanced silicon technology is used in the production of solar energy, telecommunications and the electronics industry.)

The role of the government is not the setting up of new projects, according to Fahmy, but the renewal and development of the giant list of neglected projects, such as the textile industry as well as the replacement and renovation of infrastructure. It is not conceivable for investors to provide money to a state lacking power, transportation means and ports that can accommodate large investments.