The ordination of an Egyptian woman in Texas rekindles the debate on whether women can be pastors in Egypt. 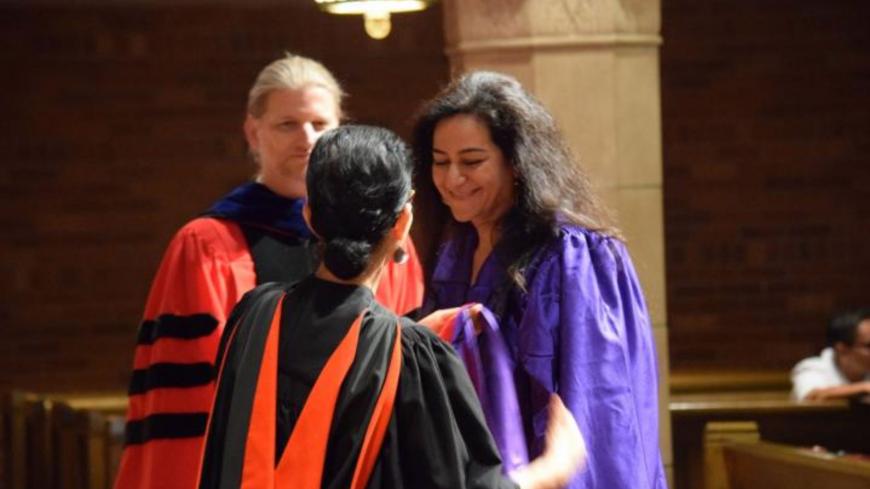 Gihan Farag, an Egyptian woman who lives in the United States and was ordained by the United Church of Christ there, seen in a picture uploaded July 20, 2019. - Facebook/Remon Ayad

Egypt’s various religious dominions have so far rejected the ordination of women. But Cairo-born Gihan Farag — who currently lives in the United States — was ordained by the United Church of Christ last May in Fort Worth, Texas. Her visit to Cairo this summer rekindled the debate on whether women are getting any closer to wearing the cloak in Egypt.

Farag’s visit to Egypt to see friends and family did not go unnoticed by the media. Several Egyptian newspapers called upon her to ask about her views on women’s ordination and whether she believes it will one day be possible in Egypt. Her friends, who requested anonymity, told Al-Monitor that Gihan may be back in Egypt in 2026 — which is the date the Egyptian Evangelical Church is expected to take up the issue of whether women can become pastors in its churches.

Farag strongly defended the right of women to be pastors and said she did not recognize any differences between women and men in the eyes of God. “Because I believe in the Bible, I believe in the ordination of women. This is not a defense of liberal theology or any other, but a defense of the Bible that advocates equality between men and women,” she told al-Bawabah News July 6. “Priesthood is a call from God to men and women alike and not a privilege for men,” Farag said to news site Al-Manassa July 18.

Some representatives of Christian communities in Egypt disagree with her words. “The Bible Baptist Denomination rejects all liberal teachings that contradict the word of God, including the ordination of women. The Evangelical Church in Egypt … clearly and explicitly rejects the ordination of Farag by a lesbian pastor,” Botros Faltaos, president of the Bible Baptist Denomination based in Alexandria, wrote in a Facebook post July 16. Faltaos claims that Lee Ann Bryce, pastor of the United Church who ordained Farag, is a lesbian. The United Church of Christ allows gay and bisexual people to become pastors.

Al-Monitor reached out to Farag and Bryce by email but received no response. A close friend of Farag's in Egypt, who asked to remain anonymous, told Al-Monitor that Farag was born into a Coptic family but later joined the Kasr El Dobara Evangelical Church in Cairo.

There, she made family films and programs that were screened at the church or on Christian television channels. Her main focus was on programs concerned with women’s affairs, their roles in Christian history and how to achieve equality between men and women.

“She always felt [she] could play a bigger role. But becoming a pastor was very far-fetched since we are taught in Egypt at a very young age that the ordination of women is not allowed. Egyptian men of religion argue that Jesus did not choose any women among his 12 disciples, although there is no text in the Bible that forbids the ordination of women or restricts it only for men,” said Farag's close friend.

The Coptic Orthodox Church in Egypt avoids addressing the reasons for its refusal to ordain women as pastors, merely describing the matter as “liberal heresy.”

“The position of the church is clear on this matter, and we can refer to the statements of Pope Tawadros II,” Rev. Paul Halim, spokesman for the Coptic Orthodox Church, told Al-Monitor.

In a televised interview in 2016, Pope Tawadros II of Alexandria said that women cannot be pastors in the Coptic Orthodox Church. “We already expressed our objection to what is happening in other Christian churches. But it eventually all boils down to the choice of every church,” he said. “Women in the Coptic Church in Egypt play a major role. The church choir is made up of young women mainly. Every church has an administration council, which has to have one woman on board at least. The Orthodox colleges and universities in Egypt include female professors, not to mention the headmistresses of monasteries,” Tawadros II said.

The role bestowed upon women by Tawadros II falls short of Farag’s ambitions, according to her friend. The idea to study theology came upon Farag during her visit to Texas Christian University in Fort Worth.

“Farag ended up enrolling in the university and completed her theological study in 2013. She then tried to be ordained in Egypt because some of the Evangelical churches in Egypt were then trying to persuade the synod of Nile — which is the highest synod of Evangelical churches in Egypt — to accept the ordination of a woman, but he kept postponing the issue. Farag decided to go back to the United States and finally was ordained in 2019,” the source explained.

Ikram Lamei, head of the Information and Publishing Council of the Upper Nile Synod of the Egyptian Evangelical Churches, told Al-Monitor the Evangelical churches in Egypt are united on the right of women to take the cloak just as men do. But he added that the church has to take into account the conservative views of Egyptian society, which prompted the synod to delay approval of the ordination of a woman.

“Farag spends her time teaching at Texas Christian University and preparing for her work and sermons at the United Church of Christ. I believe she is a role model for thousands of young Egyptian women who dream of taking the same path to become closer to God, which can only be through a bitter struggle, as Farag has done,” Farag’s friend said, implying that her ordination made it easier for others to follow her path.