A graduate of theology, Sally Azar was ordained as the first female Palestinian pastor in Jerusalem by the Lutheran church. 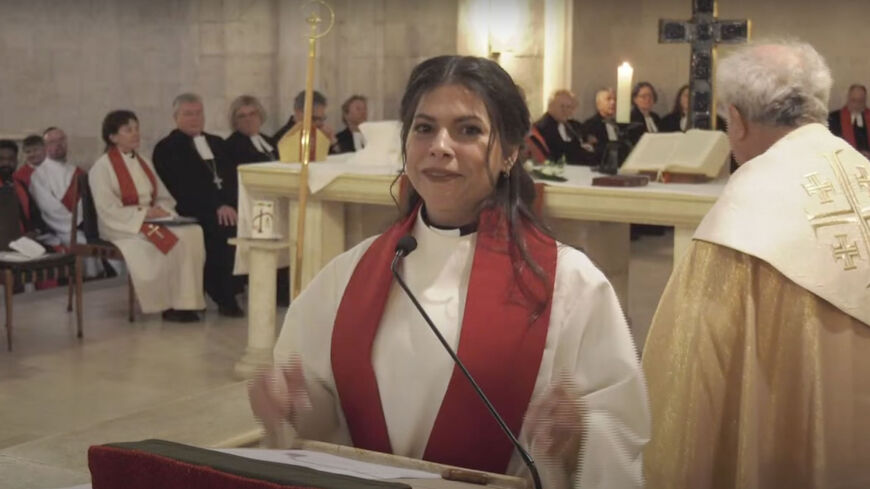 Sally Azar is seen during the ordination ceremony at the Lutheran Church of the Redeemer, Jerusalem, Jan. 22, 2023. - YouTube/ELCJHL

Sally Azar, a graduate of intercultural theology in Gottingen, Germany, was ordained on Sunday by a Lutheran church in Jerusalem; she is the first Palestinian woman pastor in the Holy Land.

According to media reports, the Evangelical Lutheran Church in Jordan and the Holy Land sent an invitation for the event that emphasized gender equality and justice.  “Sally's ministry sends a powerful message of acceptance and progress in the church's journey toward gender justice," the Church said.

Speaking to the Lutheran World Federation, of which Azar is a council member, the trailblazing pastor hoped her story will inspire others.

“With my ordination, I hope that not only young women are inspired to pursue theology, but that women of all ages who may have wanted to study theology but didn’t think it was possible will be encouraged to do so," she said.

Most of them belong to Christian denominations that do not allow female clergy — Greek Orthodox and Latin Catholic churches —.

The ordination of women, however, is not such a foreign practice in the Protestant church. Although they make up a very small Protestant congregation in the Holy Land, they do have an active presence in schools and hospitals.

According to an Associated Press report, the Evangelical Lutheran Church has about 3,000 members in Jerusalem, the West Bank and Jordan.

Know more: The Arab world is highly patriarchal and has been throughout history, with practices and stereotypes that are challenging to break.

Although in the Middle East three female ministers have been ordained by churches in Lebanon and one in Syria, where Christians play an active role in politics and society, the ordination of a woman is still a rare occasion.

According to the Middle East Council of Churches, Azar will be one of five ordained women in the region.