The recent stabbing death of a priest in the northern coastal city of Alexandria has spread fear among Christians. 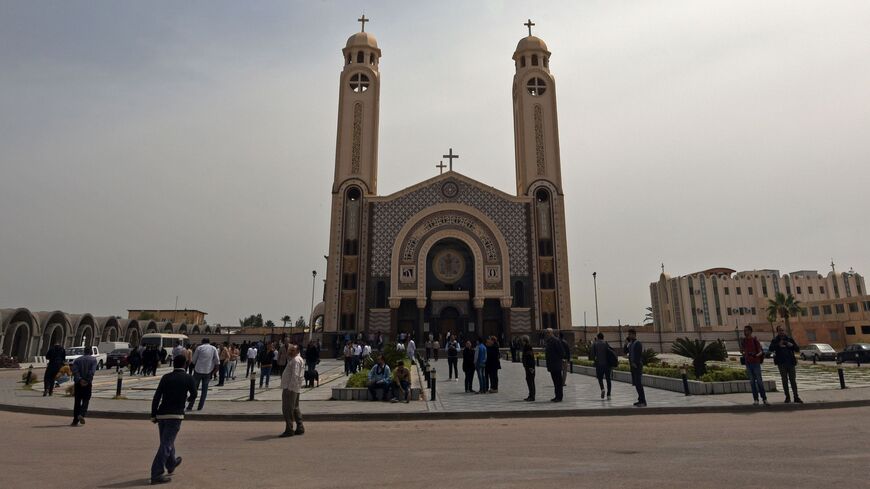 A general views shows the Monastery of Marmina in the city of Borg El-Arab, east of Alexandria on April 10, 2017, as mourners attend the funeral of victims of the blast at the Coptic Christian Saint Mark's church in Alexandria the previous day. - MOHAMED EL-SHAHED/AFP via Getty Images

CAIRO – Egypt's Christians are fearful in the wake of the stabbing death of a priest by a Muslim fundamentalist in the northern coastal city of Alexandria.

Father Arsanios Wadeed of the Virgin Mary and the St. Paul the Apostle churches in Alexandria was attacked by a bearded man April 6 as he was leaving the beach where he had met with some members of his congregation.

The 56-year-old priest, who was known to enjoy cordial relations with Muslims in Alexandria, was bidding farewell to the congregants when the assailant stabbed him in the neck with a knife, according to eyewitnesses.

The priest was taken to a nearby military hospital but succumbed to his wounds.

The incident has spread fear among Egypt's Christian minority, around 10% of the population of 102 million, though some say such attacks will not weaken them.

"These individual incidents will never scare us," Father Moussa Ibrahim, speaking for the Coptic Orthodox Church, told Al-Monitor. "On the contrary, they will make us stronger."

The government has taken steps to resolve centuries-old problems facing Egypt's Christians, including legal complications for the construction of churches.

President Abdel Fattah al-Sisi was the first Egyptian head of state to personally attend Christmas celebrations at the Coptic Orthodox Church. At the last celebration, he praised Pope Tawadros II for supporting the popularly backed ousting of Islamist President Mohammed Morsi in 2013.

"You cannot imagine the amount of appreciation and respect I harbor for the pope," said Sisi, addressing thousands of people gathered for a Christmas celebration on Jan. 6, 2022. "Men prove their mettle in difficult situations."

He vowed Egyptians would work together to build a new republic for everyone, saying, "This country belongs to all of us."

Over the past nine years, the administration has rebuilt dozens of churches that were torched by Morsi's followers after the Islamist president's ouster. Other churches in Cairo, Alexandria and the Nile Delta city of Tanta were bombed by Islamic State militants, claiming the lives of dozens of Christians.

The Islamic State in Sinai also terrorized Christians out of some parts of North Sinai, causing an exodus toward cities west of the Suez Canal and Cairo.

Wadeed was born in 1966 and ordained to priesthood by the late Christian Pope Shenouda III in 1995.

Those close to him tell of his charitable activities in Alexandria. Local newspapers published photos taken a few days before the priest's killing of him carrying food boxes that would have been distributed to Muslims preparing for the fast in the ongoing Islamic month of Ramadan.

"He lived for God and died for God," the Virgin Mary Church stated of Wadeed.

Father Andrea Zaki of the Anglican Church said such evils as the priest's killing will not "weaken Egypt's solidity or affect Egyptians' genuine love" for each other.

Coinciding with Wadeed's killing is a TV series about the rise to power in Egypt by the Muslim Brotherhood, Morsi's movement, following the 2011 downfall of autocrat Hosni Mubarak.

The show, called "Choice," depicts Christians' approval of Morsi's ousting, fear among them of the political rise of the Islamists and their desire to leave Egypt altogether. In one scene, a Christian wife encourages her husband to apply to immigrate, citing attacks on Christians by Morsi's followers.

"Half of the people we know have already applied," the wife tells her husband. "I do not want to immigrant because this means that we are running away," the husband retorts.

"Why do you call it running away?" she asks. "Why do not you say we are rescuing ourselves? What are you waiting for? Are you waiting until they chase us on the streets and kill us?"

Some people are drawing links between Wadeed's killing and the serial, but sectarian tensions are deeply rooted in Egypt. Despite an atmosphere of coexistence among various sectors of Egyptian society, some problems remain, such as Islamist groups inciting against Christians and some preachers spreading hate for them.

Christian writer Maher Youssef has called for reforming religious discourse to better protect Christians. He tweeted April 9, "Egypt is badly in need of radical solutions and a change of religious discourse," Youssef said. "We need to stop producing thousands of unqualified preachers who do nothing other than calling their fellow countrymen infidels."

Father Pavley, the bishop of Montazah in Alexandria, attributed Wadeed's killing to the spread of Wahhabism, a fundamentalist movement that promotes a strict and puritanical view of religious rites.

"We did not have such hatred 60 years ago," he said during the priest's funerary services.

Egyptian authorities have not yet released any information about the assailant. However, according to posts circulated on social media, he is from the southern province of Assuit and was imprisoned under Mubarak for involvement in terrorist attacks.

The man was pardoned by Mubarak before being sent to a psychiatric hospital and was discharged a short time later.

According to local reports, he told his interrogators following his arrest a few days ago that he suffers mental problems.

"The killer claims to be mentally disturbed in order to get away with his crime without punishment," Essam Nessim, a researcher at the Coptic Orthodox Doctrine of the Youth Diocese and author of several books on Coptic issues, told Al-Monitor. "How could a mentally disturbed man travel from Assuit to Alexandria, get a knife and kill the priest?"