Egypt is looking to capitalize on the Coptic Church’s disputed influence to affect relations between Ethiopia and Egypt on the Nile water-sharing and Renaissance Dam dossier. 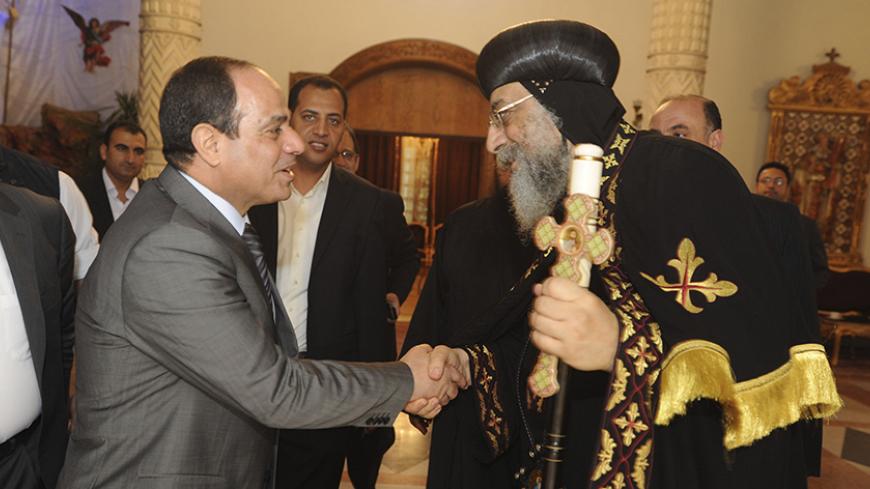 CAIRO — As tensions continue between Cairo and Ethiopia over the construction of the Renaissance Dam of Ethiopia despite political efforts in both countries to overcome the dispute over sharing Nile water, the Egyptian government is involving the Egyptian Coptic Church and encouraging it to play a role of mediation and convergence of views over the issue.

On Aug. 25, the minister of water resources and irrigation, Hossam El Din Maghazi, announced at a press conference attended by Al-Monitor the signing of a cooperation agreement with Pope Tawadros II, the pope of the Coptic Orthodox Church of Alexandria.

Maghazi said, “The church supports the efforts of President Abdel Fattah al-Sisi and the government to manage the issue of the Renaissance Dam and build confidence between the two sides,” expressing hope that the church’s efforts would resolve the crisis of the dam for the benefit of the two countries.

Khalid Wassif, spokesman for the Ministry of Water Resources and Irrigation, told Al-Monitor, “We appealed to the church to help solve the water crisis in Egypt given its important influence on Egyptians and since it has the ability to deliver a message explaining Egypt's water crisis to a broad sector of local and foreign public opinion.”

Wassif added, “The cooperation program with the church will allow training 500 pastors, servants and priests to be water ambassadors and convey messages based on religious devotion to protect the Nile River.”

He said, “The church does not have a direct role in the political or technical negotiations with Ethiopia and the Nile upstream countries, yet it has another role, that of cultural and religious influence aimed at activating soft policy through the Egyptian church’s activity in Africa.”

In another development, Tawadros is expected to travel to Ethiopia Sept. 27 to participate in a celebration of what tradition says was the fourth-century discovery of remnants of Jesus Christ’s cross. The pope had indicated in press statements that the “visit is in response to the visit of Patriarch of Ethiopia Pope Matthias I to Cairo on Jan. 10, and the Nile water issue has paramount importance in all of our dialogues.”

Regarding the pope's visit to Ethiopia, Bishop Beemen, the liaison between the Egyptian and Ethiopian churches, said in a press statement Aug. 27, “The pope did not ask for meetings with political and executive leaders of Ethiopia.” He added, “The church has soft power in terms of negotiations over the Renaissance Dam through [spreading] messages of peace and love, reassuring the Ethiopian side with regard to Egypt’s intentions. Our message is clear. We seek the development of Ethiopia, but at the same time we will not accept any damage to our country.”

The Egyptian Coptic Church is the mother church in the African continent since its inception in the first century, and has a strong and active role in Africa, which is not limited to the religious role, but also covers a range of political, cultural, educational and developmental duties.

The Coptic Orthodox Church had sent several missions to Africa, where it built its first church in Nairobi, Kenya, in 1976; there are 55 churches in Kenya alone. Egyptian Coptic churches have spread to Tanzania, Zambia, Congo and Nigeria. Abune Boulos, the general bishop of the Bishopric of African Affairs, has documented the Egyptian church’s services in Africa in the documentary “Miracles in Africa,” which presents the church as helping provide medical, social, educational and cultural as well as spiritual services.

The Egyptian and Ethiopian churches have a special historical relationship. The church of Alexandria is the mother of the church of Ethiopia, which became part of the See of St. Mark the Apostle. According to the prevailing tradition, the head of the Ethiopian church was an Egyptian bishop assigned by the pope of Alexandria. However, in 1959, Abune Basilios, an Ethiopian, was enthroned as the first patriarch of the Ethiopian church. In 1974, under communist rule and following the military coup led by Mengistu Haile Mariam against the emperor of Ethiopia, Haile Selassie I, the ties between the churches were severed. Moreover, the church in Ethiopia faced fierce attack under communist rule and lost its influence on the political administration in Ethiopia.

Despite the strong spiritual influence of the Egyptian church in Africa and its distinctive relationship with Ethiopia, experts in African affairs rule out the possibilities of potential progress to mitigate the crisis with Ethiopia over Nile water.

Hani Raslan, an expert in African affairs at Al-Ahram Center for Political and Strategic Studies, told Al-Monitor, “Resorting to the church or religious institutions at the present time to resolve the ongoing dispute over the Nile waters is a waste of time and will not push negotiations toward a solution.”

Still, he believes the role of the church and the exchange of visits could improve relations between Egypt and the Nile Basin countries, especially since most of the problems between Egypt and its African neighbors are due to the bad perception African countries have about Egypt in general. “Ethiopia is a secular state and the Ethiopian church has no influence over the government’s decisions,” Raslan said.

Moreover, he did not expect the visit of Tawadros to Ethiopia to have concrete results, saying, “Sisi himself went to Ethiopia, talked with the political leadership and signed a declaration of principles, but the crisis persists.”

It should be noted that the technical negotiations between Egypt, Sudan and Ethiopia, which began in August 2014, failed to reach tangible results to minimize the negative impacts of the Renaissance Dam on the Nile water’s flow to Egypt and Sudan. Despite the political momentum in these three countries on this file, Egypt expressed — in an official statement of the Ministry of Water Resources on Sept. 6 — its dissatisfaction with the slowdown in the implementation of impact studies showing the dam’s bad effects on Egypt so far. Moreover, Egypt reiterated its call for urgent consultations with Sudan and Ethiopia to rescue the negotiations on the construction of the dam in order to preserve the common interests of the three countries.

It seems that Egypt is keeping the door open to any initiatives that will strengthen its position and resolve the ongoing crisis with Ethiopia and the countries of the Nile Basin over the management of the Nile water. However, the political administration must exert more effort in the negotiations to reach technical and legal solutions guaranteeing the interests of all parties while not prejudicing any of them.