Why Mashrou' Leila is banned from Lebanon's Byblos festival

Organizers of the Byblos festival gave in to pressure from church officials, politicians and online groups, announcing that they had canceled the Lebanese rock band Mashrou’ Leila’s concert. 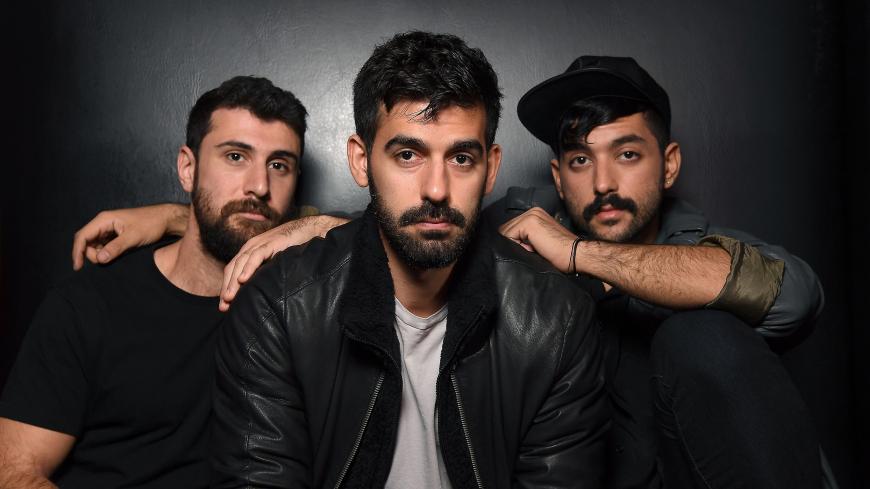 Fans of the controversial Lebanese rock band Mashrou' Leila ("Leila's Project") will have to look beyond the Byblos International Festival this month to see their favorite band on stage. On July 30, Byblos organizers gave in to pressure from online groups, church officials and politicians and announced the cancellation of the Aug. 9 performance of the band at the festival, citing a desire to “prevent bloodshed and maintain security and stability.”

The band members, who have gained international fame over the last 11 years, had recently been accused of defaming Christianity through their music and online presence and have been interrogated by Lebanese State Security about the matter.

Although the musicians were eventually released without charge by the Mount Lebanon prosecutor, the pressures the band has faced signify a departure from Lebanon’s history of tolerance for free expression. The case is part of a growing pattern in Lebanon where laws against defamation and incitement are being used to threaten individuals. According to activists and researchers, Mashrou’ Leila’s growing fame and the band’s critical perspective on Lebanese social and political issues have made it a target for political and religious officials as Lebanon’s establishment seeks to defend itself against its critics.

Since July 17, a Christian page on Facebook called “The Soldiers of God,” which now appears to be deleted, had claimed that the band was defaming Christian symbols and promoting homosexuality - the band's lead singer, Hamed Sinno, is one of the few openly gay singers in the Arab world.

Church officials soon joined the page's calls for Byblos International Festival organizers to cancel Mashrou’ Leila’s concert. On July 22, the Maronite Catholic Eparchy of Byblos, which could not be reached for comment, issued a statement saying a concert by Mashrou’ Leila would be “directly contrary to Christian faith and religious and human morals” present in the city. Byblos, located north of Beirut, is one of the oldest cities in the world and inscribed in the UNESCO World Heritage List.

In April, similar accusations led to the cancellation of a Beirut concert by the Brazilian metal band Sepultura; some claimed the group promoted devil worship.

On July 30, a Mashrou' Leila statement denied the allegations being made against the band and its music; the rock group also said it had received death and other violent threats. In a now-deleted Facebook post, an activist with the majority-Christian Free Patriotic Movement party in Byblos said he was prepared to stop the concert from taking place by force. In its statement, the band highlighted that while it faced interrogation by authorities for the content of its speech, none of the threats against the rockers' safety were investigated.

An organizer with the Byblos International Festival who asked to remain anonymous told Al-Monitor that these volatile circumstances were what ultimately led festival officials to call off the performance.

“We are not happy about what happened,” the organizer said. “But there is no solution because in the environment where we are living, so many factors played a role.”

While Elie Khoury, the vice president of the Free Patriotic Movement's youth and sports sector, distanced the party from the activist’s post in comments to Al-Monitor, a party statement he provided said the party supports “public freedoms” as long as they do not “violate the beliefs and religion of others.”

The party was joined by a number of other politicians and religious organizations such as the Catholic Information Center, which suggested that freedom of speech in Lebanon ends when it offends religious sensibilities. A joint statement issued by the three members of parliament who represent Byblos also called for the cancellation of Mashrou’ Leila’s performance, even though one of these legislators, Ziad Hawat, had attended the band’s 2010 performance at the festival along with Lebanese Prime Minister Saad Hariri.

Mashrou’ Leila’s previous performances at the Byblos International Festival and politicians’ apparent about-face on allowing the band to continue to perform suggested to the group’s supporters that attitudes toward the band and its message is changing.

“They’re getting more and more famous, they’re getting more power now,” Aniss Ezzeddine, a protester who attended a demonstration in support of Mashrou’ Leila in downtown Beirut on July 29, said of the band. “They have a huge community that supports them, and that’s why they’re being attacked now," Ezzeddine told Al-Monitor.

Aya Majzoub, the Lebanon and Bahrain researcher at Human Rights Watch, said anti-government protests over the last few years have changed the state’s approach to dissent.

“Many analysts have pointed to the 2015 trash crisis as a turning point because it signaled the people’s disillusionment with the government,” she told Al-Monitor. “It kind of put the establishment, both political and religious because they are both very connected, on the defensive.”

Majzoub said that the last few years have seen an increase in the use several articles of the Lebanese penal code that ban the incitement of sectarian tensions and the insulting of religious symbols; these have the effect of limiting individual speech.

“The pattern of crackdown is very similar in all the cases, and it’s the pattern that we’ve seen with Mashrou’ Leila this time again,” she said.

The band was called in for questioning after a lawyer filed a complaint against the band based on allegations related to sectarianism and insulting religion, after which the group met with festival organizers and church officials. At this meeting, the band members reportedly said they would apologize for having offended Christians, and later deleted content that had been deemed offensive from their Facebook and YouTube pages.

While it remains unclear whether the band had agreed to apologize for the content of their songs voluntarily, Majzoub said defendants have been forced to sign apology pledges in similar cases in the past; she said such coercion is unconstitutional in Lebanon.

The case of Mashrou’ Leila mirrors that of activist Charbel Khoury, who was interrogated by the Internal Security Forces after a lawsuit was filed against him in July 2018 because of comments he made on Facebook. Journalists in Lebanon have also faced similar interrogations, according to The New Arab.

Tariq Serhan is a student and activist who has been involved in protest movements ever since the “You Stink” demonstrations took place amid the 2015 trash crisis. He said this pattern of suppression should concern all Lebanese.

“What happened with Mashrou’ Leila touched all of us,” Serhan told Al-Monitor. “At the end it’s not about if you like them or not, it’s about that there is something very dangerous happening in the country, and we should all stand against it.”

Majzoub said the articles used to go after Mashrou’ Leila and others should be repealed, and any cases of defamation or incitement should instead be treated as civil rather than criminal offenses. Yet given the insecurity of religious and political leaders and the rising voices of civil society advocates, this is unlikely to happen anytime soon, and it is doubtful that Mashrou’ Leila’s case will be the last of its kind in Lebanon.