Yasmine Hamdan, who, along with Mashrou' Leila, is known abroad as one of the most polıticized singers of Lebanon, says her music forms an archive of the changes and challenges that confront her country. 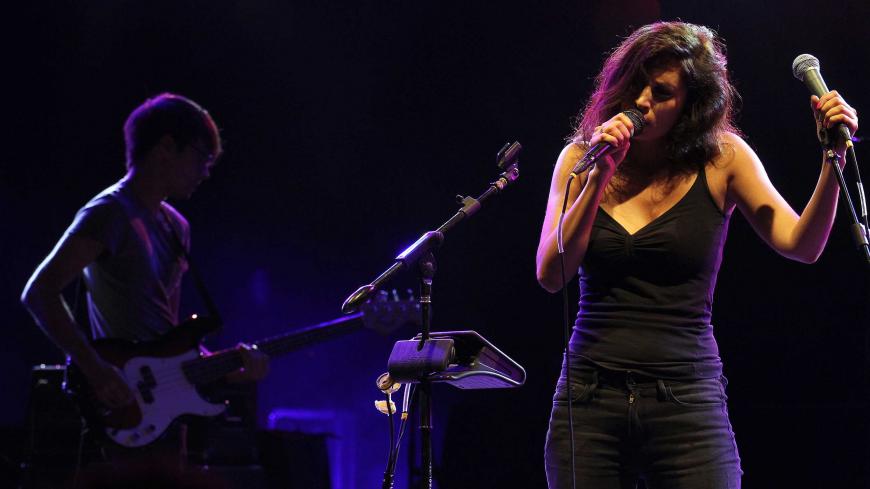 “I fear for my country/ Whispers resign/ Walls of fear and strife/ Fatigued and dishearted all,” begins Lebanese singer Yasmine Hamdan’s latest song, “Balad,” which means "country" or "homeland" in Arabic.

The multilingual singer, songwriter and actress, who became famous in the late 1990s with the band Soapkills, is considered the queen of underground music in Lebanon. Hamdan has lived in Lebanon, Greece, France and Kuwait, which helps her mix and match various musical styles.

“In this album, I took inspiration from conversations I had with taxi drivers in Beirut,” Hamdan told Al-Monitor. “My driving is crazy, so people advise me to use cabs instead of driving myself. So I ended up having many conversations with taxi drivers. Many people pass through taxis, so there is lots of energy. There aren't many collective spaces in Beirut where people can mingle and meet, but taxi drivers are in contact with people from different backgrounds and social classes every day. They have many interesting and often politicized stories to tell.”

Conversations with taxi drivers are also a way for Hamdan to observe the Lebanese people’s reaction to political and economic developments in the country, as she no longer lives in Lebanon full time but divides her time between Beirut and Paris.

In those conversations, Hamdan sometimes could recognize her own feelings or discovered a new way of thinking. “Many taxi drivers are old and have lived through the [civil] war [1975-1990]; some remember how it was before the war. My generation doesn’t know about it, and there is a distance with the previous generation,” she said. “These encounters allow me to create a kind of archive through music.”

Hamdan wrote all the songs of her latest album in collaboration with other artists from the region, except for the album’s title song, “Al Jamilat” ("The Beautiful Ones"), a poem by famous Palestinian writer Mahmoud Darwish. She recorded and financed the album herself, so she could have the final say from beginning to end. The songs tell different stories and situations from the Arab world in dialects from the region such as Egyptian, classical Arabic, Palestinian and Lebanese.

Yet she is reluctant to be seen as a symbol of a movement. “Art is always engaged, and this is a choice,” Hamdan noted. “I started as an artist and activist — also a feminist — but you don't need to underline it — it happens naturally. I just need to work on it, to explore it because I defend my rights and my life. Western media often likes to put me in small boxes and say I represent something. It is limiting to only be seen as a politicized artist or just as an Arab artist because I sing in Arabic.”

Hamdan’s fame as an engaged artist is matched by another Lebanese group: Mashrou’ Leila, whose vocalist and lyricist Hamed Sinno speaks publicly about being gay and Arab. Their statements are political and their lyrics, such as the words of the song “Fasateen,” pointedly urge cohabitation and tolerance: “Do you remember that you used to love me even though I'm not from your religion?/ Do you remember when your mom caught me sleeping in your bed, and she told me to forget you.”

Mashrou' Leila is banned from performing in many countries in the Middle East. On Sept. 22, the band performed in Egypt, where several young people raised the rainbow flag, a symbol for gay people all over the world. Seven concertgoers were arrested several days after the performance, and a week later, others "suspected of being gay" were also arrested. Egyptian lawmakers have submitted a draft law calling for gays to be jailed for up to five years and people who defend them for up to three years.

In reaction, Mashrou’ Leila posted a statement on Facebook: “This crackdown is by no means separable from the suffocating atmosphere of fear and abuse experienced by all Egyptians on a daily basis, regardless of their sexual orientations. We denounce the demonization and prosecution of victimless acts between consenting adults. It is sickening to think that all this hysteria has been generated over a couple of kids raising a piece of cloth that stands for love. The amount of boastful ignorance, hate speech, and lies that have emerged in the press is unthinkable. We urge the Egyptian press to wake up to the catastrophe that they’ve generated and take responsibility for the inflammatory lies that they’ve published over the last 10 days.”

The Beirut municipality tried to cancel one of Mashrou' Leila's shows in 2016 under the pretext that “deviants” shouldn’t be allowed to perform, according to Sinno. However, these situations do not stop them from denouncing their country’s issues such as the garbage crisis; they have performed surrounded by waste and raised funds for refugees.

Hamdan, whose criticism is often more toned down than Mashrou' Leila's, feels angry rather than scared for her own country, saying, “People react in diverse ways to the challenges that face the country. Some want to destroy and restructure, some don’t care, some push their own agenda. I feel anguish as well as anger toward the system.”

She added, “I also have a lot of respect for people who survive in all this and manage not to drown into helplessness. A lot of people create happiness, so I remain hopeful.”